– Hello, thanks for taking the time. What’s currently going on in the ROOT’s camp?

Hi there, we´re awaiting the release date of the new album “Heritage Of Satan” which will be out on 25th October on Agonia Records on both CD and LP format. ROOT will play out a few bigger shows in fall as well, the final one is to be exclusive event ROOT + The Devil´s Blood in Vienna (Austria).

– First off, hope you don’t mind starting giving some history of the band…

ROOT´s history is available at our web site www.rootan.net. Anyway, the band started back in 1987 in Brno (Czech Republic) and released 9 albums, two DVDs, four demo tapes, live album, mini CD… We played out hundreds of shows in many countries so far.

– And what are the band’s main musical influences?

There exist many influences…

– You will soon release your new «Heritage of Satan»; what are your expectations?

We expect that fans will like it as much as we do! It´s a return back to the roots of ROOT. Pure darkest metal music with satanic lyrics.

– Have been 4 years since your previous effort and this latest one; what have you been up to during this time?

We were on European tour called No Mercy Festivals with Moonspell, Behemoth and Napalm Death to support “Daemon Viam Invenient” album. It was Spring 2007. ROOT played out also some single shows then – Finland, Portugal, Norway… Another reason why we did not release the new album sooner were some re-issues of older albums on I Hate Records in 2008 and 2009.

– And how was the songwriting process this time around?

I prepared some songs, Big Boss and Ashok too. That was a team work as always. The lyrics for Heritage Of Satan were written much more sooner but we started to write music about two years ago.

– Your sound is quite varied, you can’t be labeled into one single style but; how could you describe ROOT’s sound?

And you can hear it on the new album too. We recorded at three studios this time. Dejansound studio with drums, Descent studio all guitars and Shaark studio vocals. The new album is totally different to others in ROOT´s discography again. We always try to make it different and search new details concerning the sound. The productions process along with mixing took longer time as well.

– The album was recorded in 3 different places; could you please elaborate a bit on this? (Where, why did you decide working like this, etc.)

It´s been a change. Something new. We made two songs promotional record by that way last year and we were really surprised that the sound is good and powerful. Of course, we could visit Shaark studio and record all instruments as we did on a few ROOT albums in the past but the decision to create the new system was final after that promo record.

– The cover for «Heritage of Satan» was crafted by well-known Erik Danielsson (Trident Arts). What does the cover artwork represent? Are you satisfied with the final result?

We are satisfied with this work. Erik is a fan of ROOT for a long time and he offered us his art couple of years ago. He created one our t-shirt with such a sign and ROOT logo and then we asked him for cover art work for the new album. He sent this picture and all band mates were like wow, that´s it! No details, no new versions – we´ll use this one. It represents the Hell – am I right?:-)

– This is your first album with Agonia Records; how’s this relationship being so far?

We were in touch also with previous album “Daemon Viam Invenient” but it was released on our home town label Shindy Productions at last. Now we offered above mentioned promo record to metal labels last year and Agonia Records was really interested. We asked for some business things, promotion system, distribution and other shits and after recieving answers we decided for Agonia Records. I think we can be satisfied, it´s fully professional company and we try to help them with promotion as much we can. They released a few killer bands as The Konsortium, Infernal War and now also ROOT! 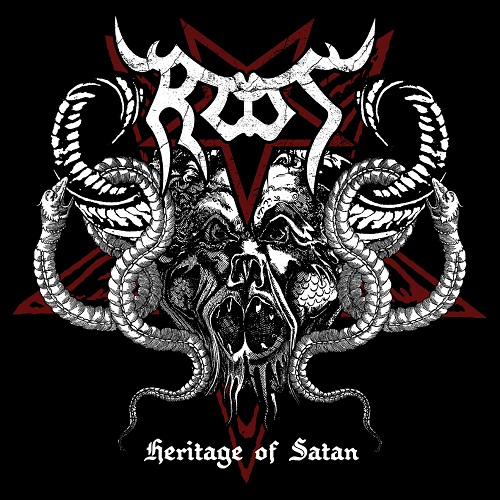 – We can find in «Heritage of Satan» guest artists as Blasphemer, Nergal and Erik Danielsson. How and why did you choose them all? What have they brought with their cooperation?

This Unholy Trinity means a diversification for the album. All these guys do great job in music and belong among black souls creating this kind of art – real metal blessed by Satan. And, of course, they are our friends. We spent a good time with Nergal on European tour and had a fun. BigBoss sang on Behemoth record as a special guest too. Erik cooperated with us on visual stuff so that it was clear he must be involved in songs. And Blasphemer is definitely one of the best and original guitarists on metal scene. And the most imporant thing, all three guys like ROOT music.

– After all these years of existence; what are your best and worst memories with ROOT?

We have many good memories and these probably erase bad ones. I can´t remember really so much bad memory. We try to enjoy music and have a fun on the road, during studio sessions, parties… There were some highlights, I can say show in Lisboa with Moonspell, European tour or great times in Canada. That´s why we still do it and hope to go on some years yet.

– We don’t actually know that much from the Metal scene in Czech Republic. What bands from there could you suggest?

You can check out our other projects for example – Equirhodont, Solfernus, Entrails and BigBoss´ solo albums.

– Finally, what does future have in store for ROOT?

The future is simple. We´ll play shows and actually we must support the new record. ROOT will celebrate 25 years of existence next year. Cheerz!

– That’s all from my side, thanks agian for your time. Now feel free to add some final words.

Check out the new album of ROOT “Heritage Of Satan”. See you on tour!