– First of all thank you so much for doing this interview and well, let’s start with these current days; ¿how’s the band currently?

Thank you for taking the time to do the interview Paco, the band is in great shape musically, but like most bands struggling financially.

– You have released a new album named «Thousand Men Strong». Tell us a bit about the album’s meaning and how has been the songwriting as well as its final outcome.

Well Nicolaj came up with the title it’s the name of the title track of course and refers to the South Americans stand against Cortez, it also reflects our attitude which is to stand together and fight for our music and our fans, god bless them.

– I have had the chance of listening to it and I think is a, musically,

quite elaborated effort, and at the same time it has some feeling of the Metal style that tends to be done in Central Europe, maybe this could be because of Nicolaj’s voice and this time you have adapted your music to that style…

No not at all Paco, I wrote all the songs and sent them to Nicolaj’s to write the words and melodies.

– I have also noticed some proggie elements and quite classic guitar arrangements in certain moments. Is currently TOKYO BLADE experiencing a certain maturity degree (musically, when it comes to create new albums) as, for instance, IRON MAIDEN?

I’m happy somebody noticed LOL well done Paco. When I wrote the songs which was before IM released their album, I wrote exactly what I wanted to write. Of course I drew on all my old, favourite influences, Lizzy, Zeppelin, Floyd etc. and that was it. I just wanted to write good songs with darkness and light you know.

– I remember your start with the debut album «Tokyo Blade»; it actually was a trully bombhsell, at least in Spain, and specifically in Barcelona it was a record almost everybody owned. I honestly always thought TOKYO BLADE would be as big as SAXON or IRON

MAIDEN in fact, I don’t know if you can recall, you played Barcelona back in 1983, in the missing venue Metal. How were those first steps for TOKYO BLADE like? Did you have huge support?

We certainly had huge support from the fans, but sadly we had NO record company backing, financially or otherwise. We never received a penny from them and eventually it became impossible to continue. Things are almost as bad now sadly, only this time even the record company tell us they are making nothing due to downloads. Sadly music has become disposable and when you hear people like Tommy Lee from Motley Crue say «I doubt if we will ever make a new record there’s no point» then you have to worry about the life of our beloved music. 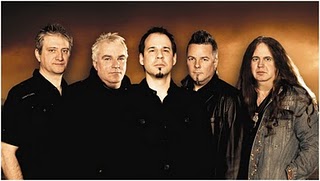 Alan’s departure affect the band? And how were those years for you?

Well Alan decided he didn’t want to go on, but we had a good replacement with Vic although he was really going in a different direction from Tokyo Blade and always wanted his «own band»

– You even released an album, «Ain’t Misbehavin'», as ANDY BOULTON’S TOKYO BLADE; an effort quite in the American vibe, with plenty melody. Do you think this album is the best you have ever done? As in many chats with different people, for almost everyone is the best release by the band.

Personally I don’t like the album, but I made it so I can’t deny it’s existence. If some fans like it I’m happy about that.

I was retired lol. Actually I was teaching guitar for a living and just playing in small bar bands.

– Let’s come back to these current days and tell us how’s the touring and gigs situation; do you have any tour planned or will you plate any festivals?

No tour as such we are playing some shows in Europe, (see our website) and we had a great show at Wacken and HOA.

– And what can we expect from you from now on? Is the band stable and do you plan releasing upcoming albums?

The band is stable and playing well, can’t say for sure about another album though. We can only hope.

– That’s all from our side, Andy; it has ben an honour for me having the chance of interviewing you, I’m one of those who grew-up with you and that own your debut album as the best released in 1983. Our best wishes and hope to see you again in Spain.

Thank you for the interview Paco, and thank you for being a fan of Tokyo Blade all these years my friend.