– Hi Marta, thank you so much for answering to our interview. The debut album by the new project MOON CHAMBER has just been released, how do you feel about it? Does it feel like an exciting moment for you?

As far as I know it’s actually coming out next month? Anyway, yeah, it’s always exciting when your music or something you were working on is getting released and shared with people. I love that feeling!

– First off, how and when did Rob Bendelow contact you to tell you about his idea? Did he know back then that he wanted to make an album or things just went with the flow?

My husband reissued a SARACEN single on his label, and sent some copies to Rob. Rob decided to check who that guy is, and that way he discovered CRYSTAL VIPER, and me. I’m not sure if he was aware of the fact that I’m a huge SARACEN fan, but he decided to write a song (and then another one), which he thought would sound nice with my voice. No plans, no attached strings, nothing. Just a simple «hey, I wrote a song, check it out» (laugh). But when we heard it, we said «okay, maybe we should do a full album together». So we got back to Rob, and now the MOON CHAMBER album is coming out.

– Bart reissued not too long ago a SARACEN release, did this have something to do? 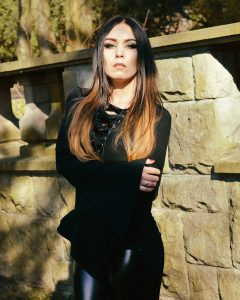 Yes, it was around the time when Bart reissued the SARACEN single on Skol Records. Some time later he also reissued the «Change Of Heart» LP, but at that time we were already working on the MOON CHAMBER album.

– Did Rob had a name for the project? What’s the origin behind the «Moon Chamber» name? And its meaning? Literally and not.

The name MOON CHAMBER was my idea. I had it in my head for a few years now, as I actually wanted to launch a doom metal project some time ago, what didn’t work out as I was too busy with other things. So that name was waiting for its time. There is no literal meaning here, but I think that this name has this cool classic vibe, like BLACK SABBATH, URIAH HEEP and LED ZEPPELIN.

– How did it feel for you to have Rob contcting you for this idea he had? Since I guess you are a fan of SARACEN, as with CRYSTAL VIPER you use to have guests artists on your albums, and one of them was Steve Bettney.

Rob contacted me and Bart without any specific idea or plan. One day we got a message, where Rob wrote he liked my voice so much, that he wrote a song for me. And few days later, another one. And that’s it, no strings attached. It was quite surreal, as we had no contact with Rob before, and we’re both die hard SARACEN fans. We really liked both songs, we discussed it, and then I asked Rob if he would be interested in writing few more, and doing full album with me. He is joking that we forced him to write more songs, but trust me, it’s not possible to force Rob to do something he doesn’t want to do (laugh).

– How was the rest of the line-up rounded up?

When Rob agreed with my idea of doing full MOON CHAMBER album, we started to discuss who could complete the line up. Bart suggested Andy Green from PAGAN ALTAR, as few months earlier they were wortking together, and what Andy did on the «The Room Of Shadows» was exactly what we needed. In the meantime Rob invited his SARACEN band mate, Paul Bradder, to record the keyboard tracks for the album.

– In fact you recorded all bass tracks on the album, but the actual bass player of the band now is Richard (Rob’s son). Does this mean there will may be live shows?

There are no plans like that at the moment, but never say never. For sure MOON CHAMBER is something very unusual, I believe that these songs would require bigger, more extended line up to be played live on stage

– Rob is in charge of the song writing and even of the lyrics. I bet is something new for you to sing the songs written by someone else. What are the pros and cons of this?

For a person like me, who loves and lives the music, there were no cons in this situation. I love recording, singing and playing, music is my biggest passion. I could do that all the time. The more music related things I can do, the better, so you can be sure it’s not the last project I’m involved in or which I’m launching. But indeed, it was quite unusual and new for me, to work on a new album where all the songs were written by someone else. 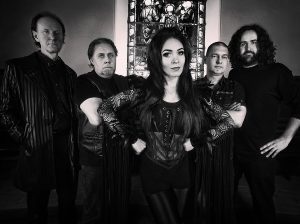 – The cover artwork, the band’s name, your video clip… You have a pretty dark aesthetic. What does inspire the imagery of the band?

All the lyrics are based on English folk tales and legends, and as the music of MOON CHAMBER is very epic and melodic – what matches the lyrics – it was logic that the artwork needs to match them as well. So I would say that the entire aesthetic was created naturally. The video was Rob’s idea, we can say it’s entirely his creation.

– This as well as the Folk parts and elements on the album seem to be a straight link to the British folklore inspired lyrics. Was this theme something you wanted to convey with your sound?

Exactly. The lyrics and music of MOON CHAMBER are one big piece, everything makes sense and is connected. We can say it’s one big concept, and the sound production is part of that concept.

– In general terms the album is deeply rooted in 70’s Rock and melodic songs that remind a lot to SARACEN, but the sound is pretty clear and modern without sounding overproduced. Was this how you envisioned? How was the production process?

The album was produced by my husband, Bart Gabriel. When we discussed the idea of doing the full MOON CHAMBER album, we agreed that it would make no sense to do a retro sounding album, or something that would sound outdated, as then it could be hard to focus on what’s most important, the music. We wanted to be sure that people will enjoy listening to it, and that it will sound natural. It wasn’t an easy task, as it’s exactly as you described it: we had to find a balance between the roots of MOON CHAMBER, the Rock music of the ’70s, and current releases, but without overproducing it. The album was produced and recorded the classic way – first we did all tracks in
demo versions, then we recorded everything the traditional way, with real drums, real amps and so on.

– All this about «Lore of the Land» being said; how could you describe it in just 3 words?

– Rock and Metal have always been male-dominated communities and in art in general women have always been made invisible, so Metal is not an exception. Do you think the role women play in the Metal world (and the way the crowd/society perceives them) has changed since you started with CRYSTAL VIPER?

That’s an interesting question. Rock and Metal scene are indeed male dominated, and actually always been. But I would lie if I would say I was ever thinking a lot about it. I just do my thing, I do what I enjoy. For sure I’m not thinking «okay, I’m a female so I am special, or I need to do it all in a different way». I don’t know, or better, I don’t think there is any «special role» for women in Metal and Rock music to be played, at least it doesn’t matter to me. What matters, is if you are honest in what you are doing, and if you are a good musician and artist or not. Perhaps people see it in a different way, but I don’t.

– Are there any woman artists that inspired you in your music journey when you were starting? Or any bands with female members you can look to for inspiration?

Yes, there are, there were, and there always will be. I like a lot of female singers and musicians, both metal and non metal. I’m a huge fan of Janis Joplin, Nina Simone and Etta James, and I love many female fronted metal bands, both old school ones like WARLOCK, CHASTAIN, BLACKLACE, ACID or ZED YAGO, and the newer ones, like NIGHTWISH, DELAIN or WITHIN TEMPTATION.

– As it’s usual, the «female fronted» term is often used to CRYSTAL VIPER and I’m sure it will be applied to MOON CHAMBER too. How do you feel about it? Are you OK with it or sense it like a non-accurate description solely based on your gender?

I know that a lot of people have a problem with that description, but I don’t. I know that are many people, both males and females, who simply are no fans of female voices, and the term «female fronted» states exactly that fact. Of course «female fronted metal» is not a genre, as you can have let’s say black, death or heavy metal bands with female singers, but it’s a description, like for example «Spanish band», «International band» and so on. Nothing wrong with that, at least in my opinion.

– Now out of pure curiosity, we interviewed you back in 2010 and you told us Death and Black Metal were popular styles in Poland, but Heavy Metal remained in the deepest underground. Has this situation change?

We have few cool young traditional metal bands in Poland, but I would say that the scene is still very black and death metal dominated. But to be honest I have no problem with that, as I’m a huge fan of
those genres.

– And finally, what are now your near-future plans? What can we expect from MOON CHAMBER after this album?

I’m now focusing on the promotion of the new CRYSTAL VIPER, as this is my #1 band. We just released new single and new video, and new album is coming out in November. We will also play short tour in Spain and Portugal at the end of the year. When it comes to MOON CHAMBER – we currently wait for the release of the album, then we will see what will happen. It’s gonna be interesting, as MOON CHAMBER is way, way different than everything I ever did with CRYSTAL VIPER.

Thank you for your support, Spain is a great country. We’ve been playing there many times, and we were always enjoying it a lot!