– Hello and thanks for taking the time. First of all, what’s the band currently up to?
Hello Tania…we are currently working on tour plans to support Out for Blood .

– You released your first full-legth album in 2004 and now you have released your second record so far, so I guess some people won’t know you yet or won’t be that much familiarized with you so, could you please introduce the band? Why SPEED\KILL/HATE?
We actually released the record 6/6/06 here in the U.S. , after this our record label folded and we spent a bunch of time getting out of our contract with lawyers etc. When we cleared that up we started the next record (Out for Blood). We chose the name Speed/Kill/Hate because it describes the way we see the band. Speed because the music is fast, Kill  because of the brutal nature of the music and Hate because of the vocals.

– And what have you been up to during these 7 years? Are all the songs in the album completely 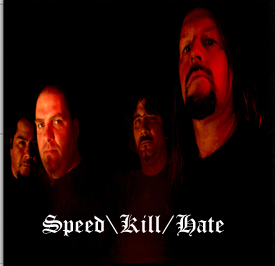 new?
From 2006 we toured supporting Acts of Insanity  and in late 2007 the label folded. We then spent time in 2008 getting out of our contract and finding a new singer. Then we recorded the new record 2009 lost it in a computer crash and re-did things .We mixed in 2010 and finally  released in 2011.

– «Out for Blood» is your first album with Bob Barnak on vocals. What has he provided to the band?
Bob is my favorite new singer period. He has added a lot to SKH. Bob’s voice is very easy to understand yet it is aggressive as hell. This something to me that is very difficult to achieve from any singer,and we were lucky to find him.

– I’m curious about the album name, does it mean your are now back for blood musically speaking?
Yes it does..we are looking to make a statement musically and hopefully we can achieve that.

– As I said, this year your new «Our for Blood» will come out but I guess you have already heard/read some of its feedback so, how’s being its response so far?
So far it seems everyone loves the record. We have had heard but positive things about OutFor Blood.

– And are you guys happy with the final result or is there anything you would like to change?

We are happy with the final result but can`t wait to start recording our next record.

– The album has been recorded and mixed by yourself at your own studios, are you happy with the result achieved? As I imagine a mixing the album yourseld can make the final result the way you wanted it to be.

We are all happy with the mix. It is a good representation of Speed/Kill/Hate.

– I could say one of the outstanding tracks in the album may be «No Remorse», as I think is a nice «description» of what the band is. What can you tell us about this song?
It is uptempo and aggressive, and also one of my favorite tracks.

– This «Out for Blood» is your first album with Hammerfist. How did you hook up with them and how’s going thus far?
Things are going real good. As far as the other labels ,we were offered a bunch of different record deals  however we just could not hammer out the details to our satisfaction with them.

– The album is a machine full of fast, aggressives and straight forward songs, though with good technical skills and a certain vibe that evokes old school Thrash Metal and a certain Hardcore feeling but, how could you describe the album for all those that haven’t heard it yet?
I think you just said it..it is the same for us.

– Due to this subtle blend of styles I would like to know what are your musical influences….

We all are influenced by all the old thrash bands. As far as guitar players, for me it was Van Halen, Rhoades, Malmsteen etc.

– 7 years are a lot actually. How much has changed the Thrash Metal scene in the USA?
The scene in the USA has really improved. You now see many more thrash bands surfacing. It is a good time for metal.

– And finally, what are your near future plans? Is thre any chance of touring Europe in support of the new album?
We are working on a support slot in Europe as we would love to bring SKH to all of Europe.