– Hello and, first of all, thank you so much for answering to our questions. How is everything doing right now with GOATH, being about to release your debut album?
Hi! Everything`s working really good right now. Got a few reviews, which were all pretty good so far, did a small european tour with Graveyard Ghould and Morbid Panzer that worked, so all in all we`re doing good.

– What prompted you to form a band like GOATH? Both of you are also playing in DEATRHONATION, a band that isn’t too different in the sense of being purely old school extreme Metal. Let’s say each offers a different musical approach but sharing the very same essence.
Yeah in some way. Deathronation is meant to be pure death metal even if it has a real dark touch, so that`s the difference. Muerte and me had the idea to do our own thing that is more into the satanic topics and in that special case more into black metal. So we`re not really sharing the same essence. In some way we are sharing the same influences.

– You debuted in 2016 with your first demo, which was already released by Ván Records. How did this signing happen?
Yes we released the demo on tape and cdr which were sold out pretty fast. I was in contact with Sven, cause he released also the Deathronation album and liked the Goath demo. He asked me, if all the demo songs will be on the first album too, cause he had the idea for a special vinyl edition of the demo before the album release and we agreed of course. We know Sven for a long time now and Ván Records is one of the best labels you can sign with. That’s the reason why Ván was the first label we asked for a deal.

– And now your debut album, «Luciferian Goat Ritual», will soon come out. How are you feeling about it getting close to the release date?
We´re looking forward to it for sure, cause we´re really proud of it because we all feel very comfortable with what we are doing and it´s not just a band or kind of a project. It has become a very serious part of our lives, a very unique kind of creation. 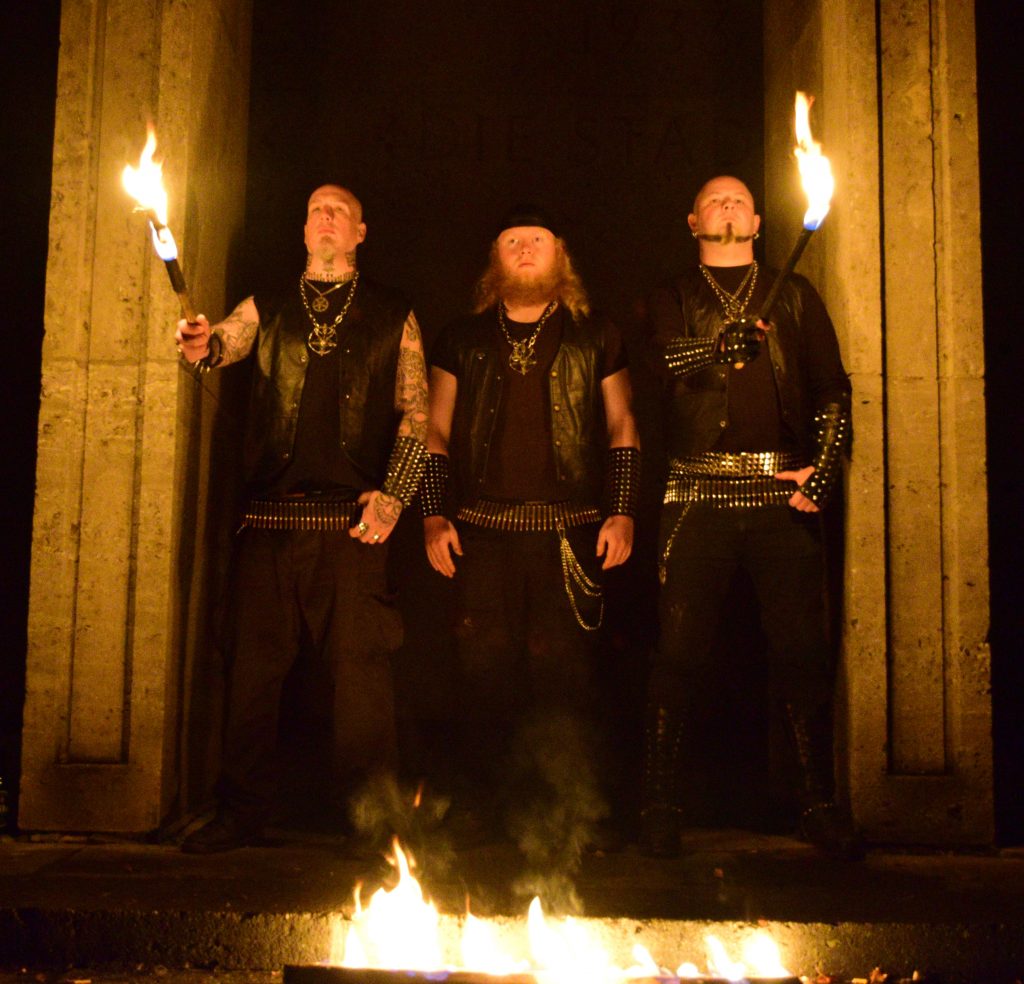 – How could you say has your evolution from the demo to this album been? Being honest I have to admit the demo disappointed me a little bit. I think the songs were great, the ideas were great, but the sound made it loose some points, and I specially felt like it lacked on feeling, atmosphere. But «Luciferian Goat Ritual» shows those good ideas, songs and songwriting perfected. I guess this is only my perception, as both works have been releases separated by just a months span.
It has been a pretty natural evolution. We came up with the idea of creating this kind of sound which lies in the musical passion of the past of everyone of us. The old bands like Deicide, Angelcorpse, Morbid Angel and also the early bm bands like Mayhem, Dissection and so on. We tried it out, recorded it after like five or six rehearsals and realized that it feels good. So it was a logical progress and we suddenly knew that we could go further, go beyond any borders to make this thing grow more and more and it became a bigger meaning to all of us, so that´s why the result sounds more reflected now.

– This being said, did you have clear what kind of sound did you want for this opus? How did you work on this aspect of the album?
We´ve  just let it run. There was no masterplan, just the pure intension to create something dark and furious and I think it worked out well!

– I was mentioning earlier the atmosphere, and this album sure has it. It’s pure evilness, it’s menacing, brings back that 80’s feeling of Metal being dangerous. I think nowadays a lot of bands focus on playing right and having a great songwriting but forget about these facts, which are equally important. What are your thoughts on this? Playing old school sounding Metal, what do you think is missing on today’s Metal?
Everything you mentioned. Nowadays bands are not serious with what they do. They´re doing their “job” really good when it comes to the craft, but are they really into it, every day? No. Do they sing about what they really mean or do they just use Satan as an image or abuse darkness for some pathetic lyrics, without really feeling any word of it. The answer is up to everyone. Just listen! We are into it, every day, every show, every ritual!!!

– A lot of bands into your style use to bring in a lot of Doom, Crust, Punk, RNR, etc. elements. It has caught my attention you play almost strictly Death/Black with subtle touches of Thrash, and some Heavy Metal (as in «The Temple»), and I think «Nihil» has a certain Doom nuance too. Just the right doses to keep things interesting but not deviating from the core. Is addingelements from other genres something just inherent to your style? It seems like you have a really clear vision of what you want to play and how to do it.
Yes. We have a vision and we´re all into different styles of metal. Be it Black Sabbath, Archgoat or classical metal stuff. We´re into it for a lot of years and we know how Goath has to sound. When it comes to the musical skills, we also know how to play it. The most important thing about it is: We´re a three-piece and we do not need to discuss about anything, not even a second and we do not feel a need to compromise for anyone, all without loosing integrity. We do what we do, come whatever may … and people do and will understand!

– I mentioned the track «The Temple» earlier, which I’d dare say it has some Rock too. In fact GOATH detaches a strong Rock n’ Roll vibe in the sense you do not add any additives nor play any tricks, you go straight to the point with no compromises. Basically, you have that RNR personality, which is not necessarily linked to RNR in its musical sense. Could you say GOATH follows or tries to capture a certain kind of ethos?
Certain kind of ethos? Don´t know. We´re also attracted to bands like Venom and Motörhead. That may be the answer. I think the rnr thing also comes naturally. We don´t have to force it, so noone of us really sees it this way. It comes straight to the point like every song does, if you feel it this way, thanks…then you´ve “entered the temple!”

– «Luciferian Goat Ritual» was recorded live, I guess that also helps to get something spontaneus and «alive».
Not spontanious but alive. We want the listener to join us the way you do when you see us live. Feel the fire, catch the spirit, let your mind go. Just watch us live, it´s a mass, a ritual, a very dark ritual…

– I also guess it’s important to be able to bring to the live scenario what we can find on the album, and recording with no tricks makes it easier.
We don´t need tricks. We´re not a circus, we´re not fake. What you hear and see is what we are, doesn’t matter if it’s live or on the album!

– The artwork for the album was made by Chris, of Misanthropic Art, with whom you have already worked with for DEATRHONATION. Would you mind to tell us a little bit how did you work on it and what does it represent?
We know Chris for many years know. He did nearly everything for Deathronation and the latest releases of Total Hate. We sent him some Goath tracks and told him approximately what we want. He’s really into our music, feels it, knows what we like and what fits to the music. It represents a ritual. Satan surrounded by witches, an interpretation of the Luciferian Goath Ritual.

– With this occult theme going strong into Metal nowadays, I guess some people could think your topics are also based on spirituality, but I see your whole theme like something that goes back to late 80’s/early 90’s evilness and devil worship. Am I wrong? Is it rather a matter of aesthetic, of something that fits the spirit of the band?
It´s both. It is not like that the image fits the band, like I said, this is us! When it comes to our personal believes there would not be enough space to get all things cleared up, but let me tell you: It´s aesthetic, it´s spirit and it´s within our hearts. We´re all sworn to this a hundred percent! We are all surrounded by HIS light.

– In fact in your music there’s a lot from that era, like the controlled chaos feeling of early MORBID ANGEL or NECROVORE. To what extent is it easy to control chaos and not sounding like a blurry wall of sound?
I think it´s just being one with the chaos, understanding your life in a certain way and understanding what your mind is made of. So it comes to a certain atmosphere, a certain passion and a certain sound… like i said, for us a natural thing, nothing to think about or like a construct. There´s no certain structure and that´s why every song sounds different but you realize that it´s all Goath.

– Anyway you also throw to this Black and Death Metal foundation elements of Thrash, inspired it seems by both the US and European scene, etc. So, which bands would you mention as the most important influences for GOATH?
Well, the ones I already mentioned like Morbid Angel, Angelcorpse, Deicide, Mayhem, Blasphemy, Archgoat, Malign, Dissection, Slayer and so many other bands of the 80’s/90’s black/death metal scene from all over the world.

– All this about «Luciferian Goat Ritual» being said; how could you describe it in just 3 words?
Satan, Chaos, Death!

– You are hailing from Germany, which seems to have a strong scene, right now with bands from different styles releasing new albums, like VENENUM, WITCHING HOUR having completed a new album, VULTURE and LUNAR SHADOW debuting… But how is it as an insider? Is there an actual sense of «scene»?
Absolutely. We´re all connected in some way. Venenum are good friends of us and I think in some way we´re all blessed the same way. Pure possession! Especially the scene in Nuremberg where we come from brought some great bands during the last years. Beside disband formations like Nyktalgia or Excoriate there are known bands like Venenum, Hellish Crossfire, Lunatic Affliction, Repent, Mechanix, Dead, Deathronation, Total Hate, Kingbeast and younger bands like Horns Of Domination, Maligno, Hellburst and Vitrol to name some.

– You have confirmed a few shows and also festivals to support the album, would you mind to shed some light so our readers won’t miss you?
Many great shows are confirmed so far, everybody should visit our homepage www.goath666.com to check our upcoming shows.

– And finally, any other near-future plans?
We´re doing a pro shot video for one song in a few weeks and then we got a few new songs in the making and we´ll play live and heavy as much as possible!

– That’s all from our side, thank you once more for answering to our interview. If you now want to add some final words; it’s your turn.
watch out for our live rituals, keep supporting the extreme metal scene, let the darkness enter and FTW! Thank you…