– Hello, first off thanks for answering to our questions. How is everything doing at the moment into the DEATHCULT’s camp just a few months after having released your debut album?
S: Hi Tania, you’re welcome. Well at the moment everything does quite good. We are planning some live activities for 2017 and also starts slowly to write new material. There will also be a cassette- and a LP Version of our album.

– Going somehow back to the roots, the band started out as a solitary band of M. Goathammer. How did the band evolve that you thought needed a full line-up?
GH: well I started to write and record the most of the early deathcult material back then. I saw a lot of potential in the songs and decided to gather friends to start what deathcult represents today: Death Metal in its purest form.

– It seems like a lot has happened in relatively just a few years; your formed in 2010 and your first demo came out in 2012. What did that first demo mean to the band? It was released by Invictus Productions, the label that is still supporting you. How did you get to work with them?
GH: it was the a very important step forward for us. We were at the recording process for the demo and I think Okoi showed darragh our stuff. He liked it a lot and wanted us for his label. And until today we are working together beside Iron Bonehead.

– Sadly one year later D. Virgin Killer was diagonsed with cancer and died a few months later. How did this affect the band? Not just in the band’s activity, but also on a more personal level. I guess such a tragic lost may be something that can change one’s ideas and perspectives on certain things and maybe channel it through music. 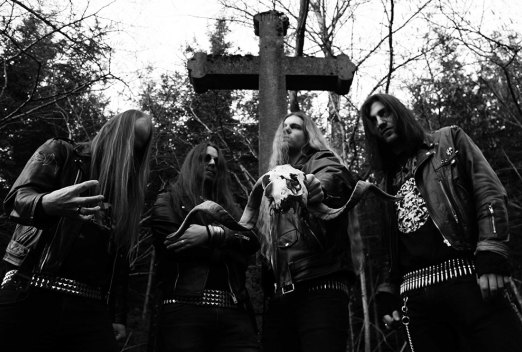 S: Music is alway a transformer of emotion. And D. was an important part of Deathcult when he was alive. His entity still surrounds us, especially on stage. We also celebrate every gig a special song, dedicated to him – He is somehow still with us. I once went to greenland with my wife and we sat on the top of this mountain wasteland. Then a guy climbed up, sat beside us and starts talking in swiss german. As you can imagine, it’s definitely not the place you expect other people from your country… there is just … well, nothing. So we started a conversation and out of the blue, he said I reminds him of a guy… Long story short, he also knew D. And could there be any better place to get that story and share some memories, than a cold and windy mountain peak? Domi has a place in our hearts and memories – That is truly a great gift.

– Then 2 years later the «Pleading for Death… Choking on Life» EP was unleashed. How had the band evolved since the demo came out?
O: I was asked by Nekros and Gothammer to joyn the band for some live shows due D.Virginkiller’s illness. I already knew Deathcult and I was really into their music. I’d known Domi since I was seventeen but wasn’t aware of his illness till that point. He wanted Deathcult to move on and thats why I took over the 4 strings of hellish crossfire. For me as a guitar player in first place, it was not weird at all to play bass next to two guitarists because they were doing a really good job.  After playing some festivals and shows we hit the OSA CRYPT studio to record the EP.

– And now you have recently released your debut album, «Beasts of Faith». How are you feeling about it?
S: Like you said it is our first album and we are very proud with the result. The album sounds exactly as we want it to be. In particular to me it’s a blast. It is the first time I hear my voice present on a record. Since I used to be a guitar player I never had it in mind to do vocals as a lead singer.
O. Finally the line-up is perfect i think. I could change to guitars which is a lot more comfortable for me and with Phoberos in the band, everything felt really natural in studio.

– You are once more delivering Death Metal with a traditional vibe, straight forward and raw in its form, and with that macabre atmosphere some bands don’t seem to pay attention nowadays. This makes me wonder what prompted you to form a band like this in first place.
O: We are all into oldschoold DM-stuff but we just play what we like. There are way too many bands out there who shouldn’t be there, you know. It is a must to pay attention on these things. We want to create music that is way more than just a bunch of riffs and melodies. Every little note, beat or scream has to serve the song and less is more sometimes. Also it not only matters what you play but how you play it. And don’t forget it is music from the devil.

– In general you seem to be inspired by Scandinavian Death Metal, as I said with its singular dark ambiences so, what bands could you mention as some of your biggest inspirations? And what are some of your non-musical influences?
S: Musically there are some Death Metal bands from the 80ies and very early 90ies who gives us boundless inspiration. Beside our passion to music there are some darker things who haunts us and soaked our musical output.

– Death is present all arround, in fact most of your lyrics deal with this. Is it important to portrait this death with your sound?
S: The lyrics are very personal, so it isn’t just a common concept or a theme to sing about.  But for me I think it is alway important to have a good connection between the audial, lyrical and of course the visual aesthetics. I think the lyrics are in line with the traditional death metal picture and that fits perfectly to our sound I guess.

– Are this kind of lyrics a form of expression for you or just something that fits the style of DM you are playing? Are there also some personal lyrics?
S: There are two Songs who already had lyrics before I joined Deathcult. So I can’t say much about the meaning of those, but as I know O Ketzer I am pretty sure, the lyrics for „Beasts of Faith“ are personal. „Death in July“ is also written by him and the lyrics handles with the loss of our brother D. Virgin Killer. But to speak about my own written lyrics, yes, they are very personal. For me it is important to sing about stuff I keep myself busy with. I think real emotions or thoughts who afflict you will bring also a permanent impression to the songs – at least I hope they do.

– Due to this I would like to know what is DEATHCULT and your music to you.
S: It’s a vessel. Deathcult is our pure devotion to Death Metal. It’s a raging beast.

– In fact even though you talk about death and darkness, opposite to a lot of newer bands, you don’t do it from a mythological or occult view. In fact considering both the album’s title and the cover artwork, could we say DEATHCULT is an antireligious act?
S: Is it an anti religious act? Don’t you have to believe in something to deny it? I often ask myself such questions and I am interested in religions as well. But I don’t like the idea of a spiritual concept used as a weapon of might and terror. It starts just with the ideological aspect of it as used a long time ago. And it somehow scares me to see all those people around me who just blindfolded believes everything someone preaches. That is absolute no option. We as Deathcult stands against all those wielding institutions. We won’t bow our heads before empty phrased liturgies. So if you take that point, then yes, we are. Beside of that, we don’t like most of this (pseudo) occult bands out there. They often sounds very narrow minded and boring to us. What’s the initiative point so sing about a religion or a cult you’re not familiar with?

– If I’m not mistaken the cover was crafted by Seventh Bell. How did you work on it? Did you give him any guidelines?
S: Yes you’re right with this information. He did also the cover illustration  for our LP Re-release and we knew, that he would fit perfectly. We had some ideas of what the cover should represent. So we talked to him about our references and our album concept and asked if he can implicate our thoughts and ideas and bring it all together. After a couple of day he send us some first scribbles. He did a great job on the illustration, we are very satisfied with the result.

– And what does it represent?
S: It simply represent our album title.

– You recorded the album at the OSA Crypt Studio, ran by Nekros and a C.H.A.O.S. member, Mentor. How positive was for the process as well as for the final result to work on a more familiar environment?
O: We’re really glad to have the opportunity to record in a familiar place. It makes a lot of things easier.

– Talking about such, for those who may have never heard about it, what is the C.H.A.O.S. circle and the bands that share this «banner»? If I’m not wrong you are also running de Chaos Ritval fest.
GH: yes that’s right. But we do also selected single shows.

– And the master and mix was handled by Olof Wikstrand, who even though being more known as the ENFORCER’s frontman he has also done a few productions. Why did you decide to work with him?
GH: Because as I was familiar to his previous work and know that he had the time to mix and master. He does a great job!

– Before the album was finished you parted ways with O Ketzer and S Phoneros joined. How did this affect the whole process of the new album?
GH: Not as much as people maybe think. When S. joined the band, we already had recorded all instrument parts and some songs already had the lyrics and their vocal lines. He has to learn a lot but and made an excellent job. We are very thankful to have him in the band, personal and musically.

– Also, did the fact BÖLZER are lately having  a lot of recognition and activity helped to take that decision? 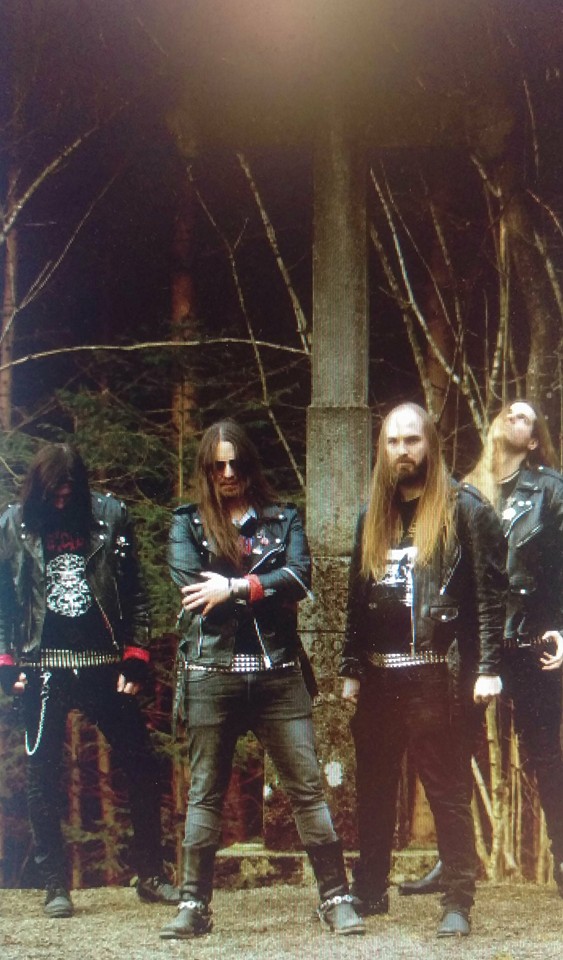 – All this about «Beasts of Faith» being said; how could you describe it in just 3 words?
S: Raging. Death. Old school.

– Before we wrap this interview up, and now as the end of the year is drawing nearer, could you please tell us what have been your 3 favourite albums of 2016?
O: no, we can’t.
GH: For me personally: Lethal Steels debut, Temistos debut and Vultures victim to the blade

– Finally, what are now your near-future plans?
S: We are planning some live activities and songwriting.

– That’s all, thank you once more for answering our questions. If you want to add some final words; feel free to do it.
GH: Thank you for your interest in Deathcult. Death is certain, life is not.