– Hello and, first of all, thanks for taking your time to answer to our questions. How’s eveyrthing going in the band’s camp? What’s keeping you guys busy?
Jennifer: Hey and thanks for letting us! There’s a lot going on in HB-camp right now. A lot of shows ahead, the release of the mini-album and plannings for next year. 2020 gonna be a hell of a HB-year I tell ya!

– You are about to release your self-titled debut EP. How are you feeling about it? What are your feelings on the final outcome now that it’s done?
Anton: We can’t wait to have it released and to share it with the rest of you! It feels great and we are proud of what we put together.

– How and when was the band formed? What brought members of bands like HYPNOS and HONEYMOON DISEASE together?
Anton: Our first meeting was at a bar in Vasagatan, Göteborg. After a beer or four we had a pretty clear vision on what we wanted to do. Jimmy and I first meet back in 2012 when I was a roadie for his former band Mamont. Since then we have always talked about being in a band together. The forming of this band came very natural. Hypnos and Honeymoon Disease have done a lot of shows together in the past. So hooking up to start this band together wasn’t strange at all.

– What have your former bands given you that you are incorporating now to HOT BREATH? Not just in music terms, but experience-wise.
Jennifer: A lot. You get more experienced for every show you make and every tour you’re on. But I think the most valuable thing we are incorporating in Hot Breath is the routines. We are delegating every little task that has to be done between all four of us and that makes our work as a band a lot more fun and a lot more effective.

– How did you come up with the band’s name? It can have different connotations. What is what you ant to evoke when someone that isn’t familiar with you sees your name for the first time?
Anton: It took a very long time to settle for a name. We had about 174 proposals, but in the end Hot Breath won the race. The name sounds disgusting and perhaps sexy at the same time. 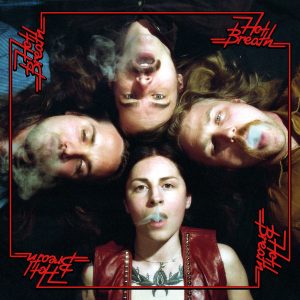 – After giving your EP some spins I can say the release is pure fun but, what is your music to you?
Anton: Something that the four of us mould together. Everybody has their opinion about something and we try to squeeze all of that into our music. If our songs looked into a mirror, the reflection would show our dirty faces.

– What do you want to convey to your listener with it?
Karl: We just want them to tap their feet, listen and enjoy the tunes. As you said; pure fun. It’s just rock n roll – no more, no less.

– You mix 60’s Rock, 70’s Hard Rock and Metal elements among others. What is the common ground? What’s the thread that ties all the songs together?
Karl: While making the songs, we never talked about metal, hard rock, ”60’s” or ”70’s” etc. except for when we felt a certain song was heading too far in some direction. Of course, since everyone in the band has a history of listening to a lot of music in those categories, some of that shines through our song writing and the way we play our instruments. As a first presentation of Hot Breath we wanted to show some width to the music and place the songs in an order so it would make sense to someone listening to the whole album through one sitting. It’s hard to point out one thing that makes THE thread that ties it all together, but we definitely had the intention of making songs that fit well together.

– The logo, the photo on the cover… Everything takes us back to the 60’s/70’s, not just your sound. Was it important for you that those influences would shine aesthetically too?
Karl: It’s an art direction that fit well with the times and that also seem timeless at the same time. The ambition is the same with the music, so one could probably say there is an intentional correlation there.

– Going further into the release; what do some of the lyrics here deal with? I feel like they have a deeper meaning than what they may seem at first glance, like they have a not too obvious significance.
Jennifer: I think the best lyrics are the ones that everyone can relate to in one way or another. So making the lyrics ”not too obvious” is something I really like. All the songs are somehow explaining a feeling, happiness, sadness or just madness.

– How easy is to take something classic and give it a twist to make it sound personal without straying from the path?
Karl: The trick is to go with your gut and not thinking too much about it. If the writing of a new song starts with one riff, there’s different paths to choose from and not one of them is “righter” than the other. Sometimes it feels right to let the song head in the more obvious direction and sometimes we feel like forcing it into a less obvious path and lead it to a point where it finds its way back again.

– In fact a lot of bands lately are playing a somehow traditional or even “retro” if you will kind of Rock, but most of them are into a more Blues or Doom/dark direction even though there’s lately a few bands venturing into this more classic, rawer, straight-forward rock n’ roll you’re playing. Is a resurrection happening?
Jennifer: I guess people are getting tired of 8 minutes songs, I mean, you can get to the point faster than that? Haha.

– On this subject, what could you say sets HOT BREATH apart?
Jennifer: I think a lot of bands still have this tough surface and that everything has to be super true and hardcore in so many ways. When you see us live, it’s Hot Breath and nothing else. We don’t have to act who we are or what we play, it’s only rock’n’roll but we like it.

– I believe you play that brand of Rock with that kind of energy that has to be experienced live. For some bands their essence is performing live but what is the essence of HOT BREATH? 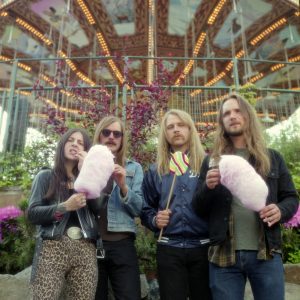 Jennifer: The essence of Hot Breath is definitely to preform live. The adrenaline you get when you’re up on stage and singing and playing your own songs in front of people that singing along or dancing to the beat, that’s adrenaline and love you can’t get anywhere else.

– All this about the «Hot Breath» EP, how would you describe it in just 3 words?
Jennifer: Hot & minty fresh. All at the same time.

– Having a front woman in the band I guess the «female fronted» term will be often used to refer to HOT BREATH. How do you feel about it? Are you OK with it or sense it like a non-accurate description solely based on gender?
Jennifer: I mean, I’m a female and doing the lead singing in the band so I guess that makes me a female fronting. But we are not only a woman in the band, there’s three other guys too. So it would be more accurate to call Hot Breath a ”four member rock band” , if it’s not enough to just call us Hot Breath.

– Talking about such, a few years ago in your home country the Kill the King was born as a reaction to the #MeToo movement. With actions and movements like this, would you say the Rock and Metal community is more inclusive or at least being more aware of certain issues that seemed unaddressed until recently?
Jennifer: I’ve seen a couple of festivals and venues that have cancelled bands that haven’t been inclusive in a way that made the venues actually cancel the shows. So that’s really good that they make a strong statement like that. Of course it can always be better and more communities who can do the same, but I  think we’re on a good way.

– As an insider, are things in the Rock community actually changing? Even though there’s a still a long way to go not just in Rock, but in our society in general.
Jennifer: Like I said in the previous question, I think things are changing to the good. Everything will not change over a night but with more voices heard and taking one step at the time there will be big changes. And I really think (and hope) that our generation will make it happen even quicker.

– And before we wrap this interview up, what does future have in store for HOT BREATH? What are now your near-future plans?
Jennifer: Our focus is basically all about the live shows right now. So the near-future plans is to get out there and spread our music live as much as we can and also writing new songs so we can enter the studio real soon again.