– Hello and, first of all, thanks for taking your time to answer to our questions. How’s everything going in the band’s camp?

Hi Tania , thank you for this space in your webzine . All is going good , we spend a lot of time in our rehearsal room, drinking and writing music.

– MORBUS GRAVE was formed in 2012. How were your first steps until you released your first demo in 2016? What kind of activity did you have during those years?
Well , at the very beginning we were in three , the songs for the first demo had been already composed but due to line-up problems they saw the light only in 2016. During this period of time the things are going very slowly , we took our time to create that then became Morbus Grave.

– You were through several line-up changes, I guess this had something to do with your «hiatuses»? Does your current line-up look more solid after having put out two demos?
Before recording “Throne of Disgust” the band was not solid at all , because the other guys played in “Black Oath” too so they left the band after a while , and me (Erman) tried to find other people, that follow the same path , to complete the line-up and continue the band . For sure the story of the band was not easier . In 2015 i found the right replacement in Maso (guitars/bass) and Pide guts on drums. Later 2016 Eddy and Eros joined the band. After a break and some line-up changes in 2018 with Johan (guitars) and Danny (drums),
the band started to write new material and this has given life to “Awakening of the dead” released in 2019 by Unholy Domain Recs and “Abomination” July 2019 both of them recorded, mixed and mastered by Maso (Macabro Bunker Recordings).

– In your filthy, raw, old school Death Metal you also seem to throw influence from horror in different forms, am I wrong? What horror movies or authors inspire you? 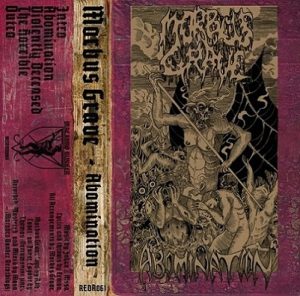 Yeah for sure !! Our main influence is old horror/thriller movies like : “I drink your blood and i eat your skin” , “Scream bloody Murder” , “ Nekromantik”, “henry- portrait of a serial killer”, “Maniac” just to name a few. If we speak about authors , i like a lot Old italian directors like Lucio Fulci , Mario bava, Pupi Avati. And of course Lovecraft is an other strong influence for the band itself.

– You transport these influences to your music, managing to conjure up a sinister ambience. Does amtosphere play an important role in your music? What kind of images do you want to paint into your listeners’ mind?

The concept about the band has always been linked to something sinister or otherwise obscure. All these influences from which I draw inspiration are combined with what is experienced in everyday life … nightmares, paranoia, pains ….are what is manifested in our music. We say that the vision that could be created in the mind of the listeners is as if himself lived a nightmare from which he cannot escape … if I can tell you a recurring horror of mine is being attacked by giant spiders torturing and devouring me … this is how I would like to convey to the listener ,a sort of nightmare without a way out.

– And musically, what are your main influences? You seem to draw from different scenes.

I started listening to metal when i was a kid, the idea has always been to create rotten and raw death metal …Autopsy, Death, Possessed , benediction for sure are some of the bands we love most …

– What fuels the band? Booze? Horror? Filth?
Good question… For sure everything you said. But weed too …We spend a lot of time in our rehearsal room , that is called “Bunker”, to drink and smoke .

– Your latest demo «Abomination» is out via Redefining Darkness. This is probably the biggest label you have worked with so far. How did everything happen and how are things going? Could you say you are now reaching more people?
Yep , Redefining Darkness Records contacted us time ago when we prepared a video preview about “Awakening of the dead” demo . Thomas from Rdr were very interested in working with us and this was a big surprise so far.. The things are going very good , Redifining darkness is doing a great promotion about the band and this permits us reaching more people.

– On this release you remain loyal to your style and to tradition. What’s to you the most important in an album of the genre? The overall feeling? The filthy sound? Or is it a mix of different elements?
Definitely the combination of both elements. I believe that in addition to the rotten sound the band must be able to give a bad and unhealthy feeling capable to capture the attention of the listener.

– With a well-known label into the underground supporting you, do you have plans for a full-length album?

At the moment we are waiting for the November tour we will be doing in Italy, after which we want to focus on writing new songs for a full-length album if possible. 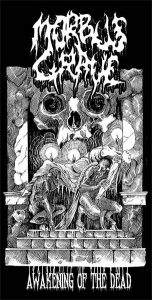 – You are hailing from Italy, a country that has always had a great Metal scene into different subgenres, and seems to be still healthy with newer acts such as THE RITE, THULSA DOOM or NECROMUTILATOR among others coming out but, how do you perceive it as an insider?
this is very nice, there are so many interesting bands in Italy that are having what they deserve. Unfortunately, Italy has always had some excellent bands that have never been recognized, if not the old glories (Bulldozer,Schizo,Death SS)) and there are good assumptions that our country has a good musical appreciation from a musical point of view

– In fact there’s now an obvious resurrection of old school Death Metal. How do you guys feel about it? Is it easier to get out there due to the growing interest or the fact that there’s a lot of bands doing this makes it harder?

things have changed so much.Once it was difficult to find the music because there were not all the channels that are there now.It was necessary to correspond with the groups by letter. The bands could be discovered by word of mouth or fanzines. The fact that now there is an increasingly growing interest in death metal is pretty cool but often I see that it becomes increasingly difficult to follow it because there are really too many valid bands … surely the most important thing for a band is to succeed to stand out with his own attitude and his own music.

– Are there any new bands into the style (or similar) that have caught your attention?
Surely Since years i’m following underground stuff ….Buying Lp’s and demos ….if i have to mention just a few of them …Rotted, Aseptic, Laceration, Kommand, Repulsive Feast , Guntless, Hyperdontia, Undergang and so on…

– And now, what are the near-future plans for MORBUS GRAVE?
We will do a mini-tour in Italy with our italian comrades Sepolcro . For us is the first time that we will have an experience like this so we are very excited about . We are preparing some merchandise , and later after this we will focus our attention to write new stuff .

Thanks to you Tania and your webzine.Play rotten death metal at maximum volume and support the underground.
In darkness…