– Hello and, first of all, thanks for taking your time to answer to our questions. How’s everything going in the band’s camp?
Thanks, it’s going well. We are busy with writing new songs for the upcoming release.

– You are just a straight-forward, no-frills (old school sounding) Death Metal band, not seeking to reinvent the weel nor to experiment. What are the goals and aims when you first form a band like this? What prompted you to form HYPERDONTIA?
I moved to Copenhagen, Denmark in 2014 and I had been playing with Mustafa for many years in many different bands when I lived in Turkey. We were always in contact and he had some songs and ideas and he asked me if I wanna do a home project with him. We didn’t plan or think much about how the songs should be. I knew Tuna and David from their other projects. I asked them if they were up for doing a small project and they accepted it. We recorded a 3 song EP called “Abhorrence Veil” and it took us a week or two to do that. We basically didn’t have any goals or anything. We are bunch of death metal lovers who want to play and enjoy music.

– We won’t go into details about the meaning of the band’s name (anyone can just Google that), but to say the least it’s morbidly unsettling. Did you choose that name because it fits the essence of your sound? Ugly, filthy…
David first came up with this name. Mustafa and I had no idea what Hyperdontia was before David suggested it. When we searched the meaning on internet and saw the pictures we thought it looked disgusting and cool!

– You moved from Turkey to Denmark some years ago. What are the differences between playing Metal in Turkey and doing so in Denmark?
Mustafa still lives in Istanbul, Turkey. I was born and raised in Istanbul and lived there til i was 27. To be honest the Metal Scene there is more or less the same anywhere. Northern people are maybe a bit more quiet and southern people are more intense but metalheads are just metalheads. The Underground scene was big in the 90’s in Turkey. And maybe a bit quiet in early 00’s. I can see that my friends organised a lot of concerts in the last 5 years both in Istanbul and Ankara. Mezar Organization brings a lot of bands from outside of Turkey and all the concerts are sold out as far as I know. People even from europe attend these concerts. 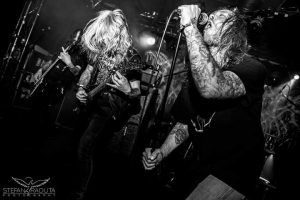 – Does Turkey have a healthy Metal scene? It isn’t too known as opposite to Denmark’s, with bands as UNDERGANG, TAPHOS or PHRENELITH among others showing people still have an interest in Death Metal, and with festivals such as Killtown Death Fest.
There are a lot of metal bands in Turkey. Maybe more than Denmark but people don’t really check maybe it’s because Turkey is outside of europe or people are judgemental. You should definitely check these bands: Engulfed, Diabolizer, Burial Invocation, Hellsodomy, Cenotaph which has been active for 25 years now, Decimation, Carnophage and so on… and concerts are much more intense than Danish gigs haha! People headbang and go nuts. You don’t see many people standing and starring at you when you are on stage.

– In fact you are an international act so, how do you use to record your material?
We record at our own rehearsal rooms and home studios and send what we record to each other. Things are much easier nowadays with internet. And Mustafa flies here to Cph once in a while to rehearse.

– You have now released a compilation entitled «A Vessel Fornlorn». Why did you decide to release a compilation as such just a few years after forming the band?
“A Vessel Forlorn” was supposed to be a split song but things didn’t work how we planned. It was just before our US TOUR and we wanted to release this song somehow. we had these live songs we recorded in Istanbul. And people were asking for this bonus track from Abhorrence Veil which wasn’t on the 7” we thought it could be nice to have them all together.

– In fact everything seemed to happened so fast: debut release in 2017, debut full-length in 2018 and now this compilatio, besides all your live activity. Did you expect to be so productive when you formend the band? To have so much activity in such a short time span?

No we did not. We always played music and I know Mustafa has much more material than 2 albums. We don’t record everything we have. We just enjoy doing this. So no rush and no stress.

– This compilation contains the songs on «Abhorrence Veil». Is this release still available? If I’m not mistaken it was rereleased some time ago in both vinyl and tape.

As i mentioned abhorrence veil was released with only 2 songs on 7” and 3 songs on cassette tape. The point was having all the songs on the same vinyl so people could listen to them all together on vinyl format

– You selfreleased that opus but was a big success. What did «Abhorrence Veil» mean to you? Did it open new doors for HYPERDONTIA? As you later got signed by Dark Descent Records.
We worked with DDR before Hyperdontia. Matt released Burial Invocation – Rituals of the Grotesque in 2010. And i think it was his first release or second. I might be wrong. I don’t know if it opened new doors. Maybe?

– It also fetures live songs from a gig in Istambul. Did you record them with the idea of having them on an album?

Tuna records some of our concerts just for fun. We didn’t even know he told the soundguy to record the entire set. No, nothing was 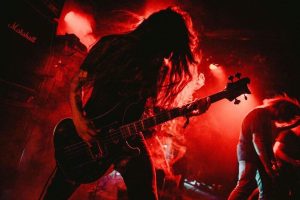 – There’s also a brand new song,  «A Vessel Forlorn». It sounds just like HYPERDONTIA, picking up here you left on with your album but, how would you say has the band evolved since «Nexus of Teeth» came out?

– Was this song written specially for this record or you already have some other songs that you haven’t released yet?

Some of the riffs were written before but Mustafa wrote this song just for that split we were planning to do.

– You just got back from touring the US a few months ago. How did everything go? Are there any real differences between the American and the European crowds?

It was great. We made very nice friends. Mortiferum guys are the best. It was so nice and chill to travel with them and we had a lot of fun. It is of course different but again but not in a negative way. As I mentioned before metal scene more or less same everywhere.

– Now you have a couple of festivals and besides this, what are some of your near-future plans?

Yes, we are planning to tour in europe next year and going to play at some festivals.

– That’s all from our side, thank you once more for answering to our interview. If you’d like to add some final words;feel free to do it.

Thanks for all the questions. Ölüm Metali!