– Hello and, first of all, thanks for taking your time to answer to our questions. Your first album is about to come out, how are you feeling about it? Has it turned out as you expect?

Hello, thanks for the interview. Feeling great. Yup, it has turned out quite as expected.

– You rise from the ashes of VORUM. After the «Current Mouth» EP no one saw this coming. What lead to the death of VORUM?

Things happened that led to other things and in the end everyone just had to accept the inevitable.

– And what prompted you to form CONCRETE WINDS? What 50% of VORUM forms the band? Or are you an anonymous entity?

CW consists of PJ and Mikko. We have played and written music together for a lot of years now and the ideas and the drive to write and play fast, ugly death metal doesn’t cease to exist. All abominations has to come forth.

– Tell us about your name, Concrete Winds. What does it mean? Literally and not. It somehow captures that feeling of anxiety you transport with your music.

It is nothing but meant to describe our audial manifestation. Originally from the first verse of the Vorum track Current Mouth.

– And about the album’s title? Is it a depiction of your music and spirit?

It is precisely that, yes. A continuation of the band name.

– There has been some delay with the release of the album, what caused this? Was it due to circumstances out of your hand?

Yes, as we also announced on our facebook-page, it was due to unforeseen reasons beyond our control.

– On this «Primitive Force» you somehow you pick up where you left with «Current Mouth». How do you regard this new band? A continuation of VORUM or a totally new entity?

It’s a new entity, but it hasn’t changed the way we write music. Everybody has their style of writing music so of course maybe one can here some familiarities between Vorum and CW

– It’s almost poetical, feels like an allegory. It’s like if death was coming back to life. As the afterlife of VORUM. Is everything you do musically connected in any way? Not just musically.

Well, this is connected with Vorum in the way that it is 2/4 of what was Vorum.

– Sound-wise, you seem to sink everytime deeper into chaos and barbaric sounds. What direction are you heading to? Forward or deeper? Further or below?

– «Primitive Force» is a brutal assault of relentless speed with no place for mercy or to take a breath, but at the sime time is creative, creating an interesting contrast and equilibrium. Would you rather strive for contrast/impact or equilibrium?

We strived to make an intense death metal record, which I think we did. Whether it’s equilibrium or contrast/impact, that’s probably up to each listener to decide for them selves.

– When I reviewed the album I said you create destruction. Kind of musical alchemy. Woud you say you rather destroy or create? What is CONCRETE WINDS for you?

– With zero atmosphere you manage to conjure up a sadistic, twisted, demential and sinister ambience. What emotions or thoughts are you channeling with your music? is there any specific mood you want to induce your listener in? Or any feelings you intend to instill?

– To me it feels like you puke on all rules, norms and on conformity even though always delivering a no-frills, straight forward, traditional sound. Is it easy to break the rules but at the same time not straying from the path of a traditional style?

You always want to do something different, but not just for the sake of it. It has to sound good as well. But in the end it’s just the way we write and if we think it sounds right, that’s the way to go, be it rule breaking or not. Rules are made to be destroyd, but there are no rules in death metal.

– In fact is an almost nihilistic, pretty underground (to me underground is not about how many albums you sell or how big your band gets) kind of attitude to my eyes. What is the band ethos? 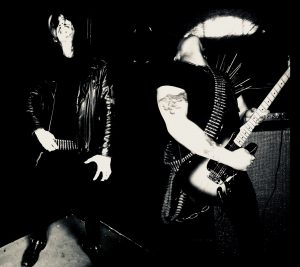 – There’s not much information on the album so, what do some of its lyrics deal with? Are at one with your sound and imagery?

Lyrics are included with the LP/CD. They are at one with the whole of it.

– You recorded the album at the Underworld Studios with Mersus. How did the recording and production process go? It sounds professional yet raw and dirty.

Mersus is very easy to work with, we already knew what we wanted before entering the studio and we understood each other in an instant, so coming up with the sounds and everything was no problem.

– The guitars are upfront most of the times, with a huge focus on riffing. How did the songs on the album come to life? How did you work on the songwriting?

Some stuff was sent back and forth, but most of the songs we put together on a few rehearsals that we had before entering the studio.

– All this about «Primitive Force» being said; how could you describe it in just 3 words?

– You aren’t a «revival» kind of band or one that can be tagged easily. You just play putrid, extreme Metal. I wouldn’t say you play Death Metal but DEAD Metal but, how could you define your sound? What is this movement of «death» for you?

Yes, there are a lot of different ”genres” now a days, but this is probably about each and every ones own opinion, how one absorbs the music. But sure, it is putrid and extreme. It’s aggressive noise torment. It’s death metal the way we do it in Concrete Winds.

– For all those who might be interested in getting their hands into this release, where and in which formats will it be available?

– And now, what are the near-future plans for the band? Do you plan playing live?

There are things going on for sure, so we will see if something happens already this year.