1- Hello, thanks for answering to our questions. What are you guys currently up to?
Currently, the band is putting together gigs promoting the new album “Still the Wretched Linger.» Beldam just played a Metal Showcase at Champion Brewing with Ruby the Hatchet and Ramming Speed. We have several high-profile shows coming up in the next few months, and in the meantime, we are investing all of our energy into promoting the album. New songs are always in the works, but for the moment, it’s all about the release and getting in as many shows as we can.

2- First off, could you make some history of the band?
The band started three years ago when guitarist Grahm Reynolds responded to bassist Addison Dodds’ ad to start a doom metal band. They quickly learned they had a shared interest in bands, shaping their songwriting partnership. Beldam added original singer Stanley Stepanic , and after auditioning seemingly every drummer in central Va., Cullen Wade came on board as the final piece to the doom metal puzzle. After that, it was writing and playing shows. Beldam’s original demo garnered attention from some metal streaming sites and compilations, sparking the idea that we had enough dark energy to record an album. So we did just that. In December 2015, Randall Guidry took over vocal duties and is clearly a force to be reckoned with. The band was lucky to connect with Stephen Kasner, who did an amazing job with the artwork, and has been an absolute brother through the process. Many thanks go out to him. Fast forward to March 2016: a righteous email and the band got together with HPGD productions to release «Still the Wretched Linger.»

3- How could you describe your sound?
It’s a good play on Sludge and Doom. A wall of sound with feedback, buzz saw guitars, bone rattling bass and crushing drums backed by hate-filled, vengeful lyrics is the essence of «Still the Wretched Linger.»
4- What are the band’s main musical influences?
EYEHATEGOD, Black Sabbath, High on Fire, and Graves at Sea are all very evident influences throughout the album. Of course, there are many others, but these guys have always stood out and really impacted Beldam’s past and present songwriting.

5- How is the feedback for your new album being?
Beldam’s first album has been positively received so far, from online sources as well as in live venues. «Still the Wretched Linger» has earned airtime on Grip of Delusion Radio alongside a few others such as Mari’s Cauldron out of Italy. We’re quite happy with the feedback and can’t wait get out on the road to support the songs.
6- And are your personally satisfied with the final outcome?
We’re definitely happy with the end product. You’re always going to nitpick your own work and want to make tweaks, but after everything Beldam has put into getting “Still the Wretched Linger” to where it is today, we are happy with the release. 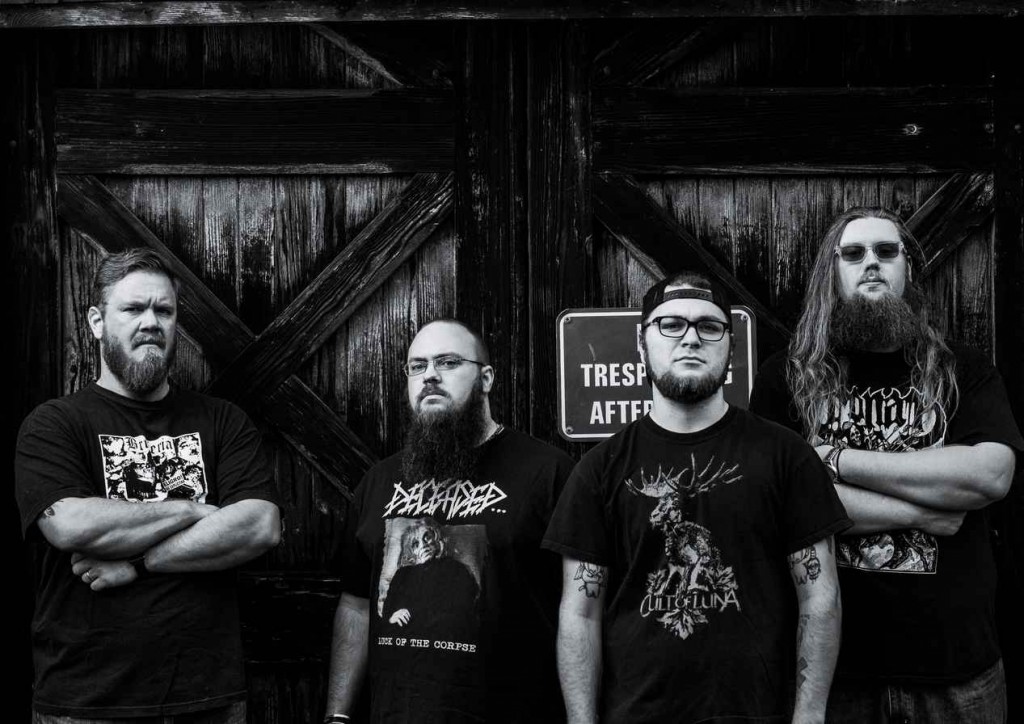 7- How could you describe this opus in just 3 words?
Full. Frontal. Assault.

8- How has the production process for your new release been?
The production process has been amazing. All of the pieces have fallen into place at the exact right time.  One of the  highlights has been working with Stephen Kasner. He understood what we wanted art-wise and where we wanted to go with it—he did an amazing job.
9- And how do you use to work on the songwriting?
Our songwriting process begins with either guitarist Grahm or bassist Addison bringing in chord progressions or completed songs to practice. The band will then jam the song through so drummer Cullen can add his parts and ideas. Singer Randall will either work from a rough demo ahead of time or create his lyrics at practice to make the song whole. It is all very organic and is a testament to the musicianship within Beldam.
10 – Finally, what are you near-future plans?
The band’s full focus will be on promoting «Still the Wretched Linger.» We are proud to be partnered with Clawhammer PR and HPGD Productions to get the word out on «Still the Wretched Linger.» Beldam will also be gigging as much as humanly possible and writing new material for the next album. Thank you for having us, and many thanks to everyone who has helped us make «Still the Wretched Linger» come to life: Stephen Kasner, Mike from HPGD Productions and Clawhammer Promo for working with us on the release. Far too many people to thank but they know who they are.