– You are the only member of the «band», have you ever considered having a full line-up? What are the pros and cons of being just 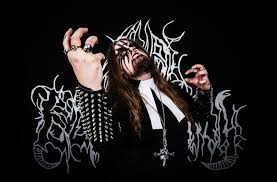 yourself?
During the several years I’ve been in numerous bands since the late 90’s I’ve discovered that I work best on my own. I’m a lone wolf when it comes to creating art. Black Metal is a very personal vision and it’s more and more difficult to fit that vision together when working together with several souls. Having more members of course has a lot of advantages. Playing and composing all by yourself is a load of work and the even worse thing is that you get blind for your work. Criticism is harder when it’s just you and noone else is there to point out what could be done better. But bands are always drama and rehearsals and shit.. Even with good friends there’s always conflict. Because great visions always clash, both in good and in bad. I have been walking a solitary road and like to compose and record in solitude. The new album was recorded in a real studio which was an interesting experience. Really hard but also rewarding. There I actually realized how easy it would be just to play one instrument in a band or do the vocals; once your part is done you can just lay on the couch watching others sweat. Apart from my loyal session drummer, it was only me that was sweating and cursing.

– Some months ago you released your newest album, «Western Decadence». What does its title refer to?
The title refers to the times we are living in. The grand, civilized Western world we are living in, at the highest peak of evolution is crumbling down in decadence like Rome back in all its glory. While we indulge ourselves in the latest inventions of technology and science, ridding ourselves from the pest of christianity (finally!) it’s only a turn for worse; to dullminded atheistic materialism. Abandoning the slave religions of the deserts does not mean that we should abandon spirituality altogether! No! We’re on the wrong path with that. I’m a spiritual person and while I rebel against the heavens I also bow to the old gods.. Satan, the ancient serpent of wisdom… I breathe His essence and spit upon the atheist empty minds! Even christianity of today has been ruined! I like the medieval close-minded fundamentalism more than this mellowed boring cumdrinking pathetic carbon copy of what it was. There’s not even point on fighting against an opponent that just bends over and takes it up the ass while apologizing to you. Fight you morons! It is islam and the cunt allah that will fuck you in the ass while you turn the other cheek! This is what I’m talking about on the album Western Decadence; the decline and fall of the West. All will come to an end.

– And now that have been a few months since it saw the light of day; what are your feelings on the final outcome?
I couldn’t be more satisfied. Every piece of the puzzle fits perfectly. The cover art is so fucking amazing as well as the promopictures with the beaufiful sex mistresses of Satan dripping lust but most of all the sounds of the album are pure perfection. I’m very satisfied with my compositions of course but the hard work in the studio paid off and the songs sound even better that I ever could’ve expected. The new album continues in the same vein as the previous one ”Perversions of Satan” but this time it serves my vision better. For me it’s perfect. And I’m glad that other people seem to like it too since there has been lots of positive feedback, both from reviews and followers of my disgusting arts.

– With this album, once more, you spread a message of blasphemy and impurity, that makes me wonder what is Black Metal for you and what shall it be all about.
Black Metal is my life. Whether I liked it or not it has become a part of me that cannot be separated even if I desired to. Black Metal for me is the gospel of Satan, the tunes of my soul’s worship to Lucifer. Black Metal is about Satan, death, hatred, evil, dark side of the world, darkness of nature, evil in man, blasphemy, desecration of all that is holy, darkness of the soul… It is Satan in audial form, capturing the primordial darkness into tunes of evil. Some cunts may think that Black Metal could be apart from some or all of these themes but they are simply and sadly wrong and those fucking hippies can go and fuck each other in some rainbow forest.

– Should be above all a matter of devotion? You have been and are still part of differnet projects so it really seems like Black Metal is your life.
People who play Black Metal with no devotion in it should choose some other genre to ”have fun” with. What makes Black Metal Black Metal is not the riffs or screaming vocals or blastbeat drums. It’s SATAN. What’s the point of going to a church if you don’t believe in god and Jesus Christ? It’s just fucking stupid. Still some people go, I know, but they are just stupid. Black Metal is the Devil’s Rock’n Roll, it was forged to be so. Along with white metal it’s the only rare metal genre that is defined by it’s content and not the sound or the musical structure. Some can argue with this but they are just wrong. And stupid.

-And could you say devotion is one of the characteristics of the Finnish scene? It has a really strong one.
Well yeah. I recently heard that the Finnish scene is so popular because the bands are serious about what they do. Well that didn’t come as a surprise to me. This is a small country and everybody knows each other. I KNOW how serious other Black Metal artists in Finland are about their art. I know all the main band people in Finland and it’s rarely when you meet some half-assed moron who plays Black Metal just for the fun of it or something. Finnish Black Metal bands really put an effort to what they do. They are serious with it. This is not really a happy country. We live in darkness more than any other country in the world. You can’t even imagine how it is when you don’t even see a glimpse of the sun for months. That drives people to suicide or deep depression. And from all this darkness and fucked up minds can come some really special Black Metal art. No wonder that Finnish Black Metal is on the rise. Devotion for sure is the keyword for Finnish Black Metal, there is no doubt about it.

– Hammer of Hate is your own label. How is it like nowadays, with so many bands and downloads, to run an underground record label?
Actually it hasn’t been my label for a couple of years now. I sold it to KVLT guys because I didn’t have the time nor the energy to run it anymore properly due to my dayjob. A shame really as I really enjoyed running it and working with great bands like Förgjord but running a label today is a real pain in the ass haha. Hammer of Hate was at that critical point that it was too big to be run along with my dayjob but not big enough to be the source of my livelyhood. So it was a difficult and heartbreaking decision to part ways with it but I’m happy that it ended in good hands.

– In fact you have done several split with different acts. I have always considered split albums to be some of the best things of underground metal, kind like a way of showing respect and supporting other bands. Is this your favourite format or is just easier to relese short legth opuses?
Indeed, I’m with you on this! Split release for me are a mark of brotherhood, companionship, teaming up to support each other. That’s how I see them. That’s why I don’t do splits with just anyone but only with bands that have a meaning to me, that I consider as brothers in blasphemy. I’m really proud of all the splits I’ve done with different hordes, Finnish and foreign. Very special communions.. And still more planned! It’s of course easier to create a song or two for a shorter release but the main focus of the fans is usually on the full-lenghts so I try to gather up those too once in a while although it’s a lot of work. It really drains everything from you when you complete a full-lenght! So it’s easier to do some smaller release in between as well and what could be better than a split with a brother-in-arms band.

– All this about «Western Decadence» being said; how could you describe it in just 3 words? 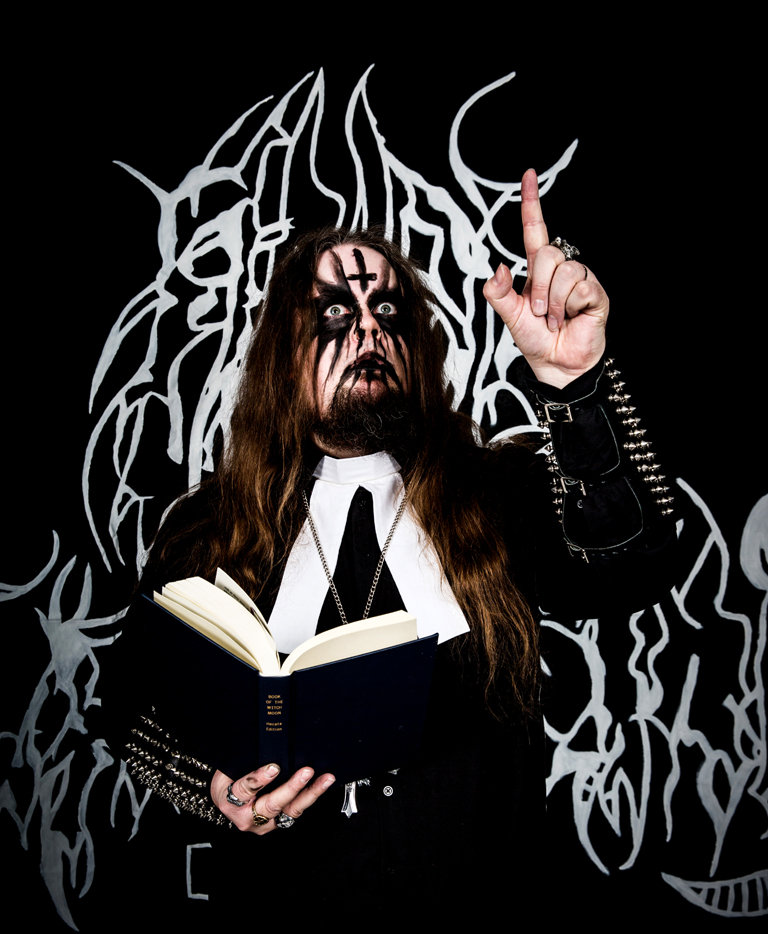 – Before we wrap this interview up, and now as the end of the year is drawing nearer, could you please tell us what have been your 3 favourite albums of 2016?
Fuck these are always hard! I always forgot what was released in what year hah.. Well here goes:
WARDRUNA: Runaljod – Ragnarok. I fucking WORSHIP Wardruna! It’s something so primal and beautiful. It takes me to places.. I can almost breathe the scent of the trees surrounding me when listening to Wardruna. Something so primordial, ancient.. Love it.
ANTIMATERIA: Valo Aikojen Takaa / KORGONTHURUS: Vuohen Siunaus. Splitted place for the 2 best Finnish releases of the year. Both are bands of good friends and both simply excellent.
WHOREDOM RIFE: The Worship Of Idols Instead Of God. Most likely there are more that I should mention but this really stick to me. Norwegian Black Metal like from the 90’s!

– Finally, what are now your near-future plans?
Trying to get myself to rehearse for the final live show and hopefully that will spark some sort of inspiration for future blasphemies!