– Hello, thanks for taking your time. How is everything doing right now into the WARSENALS’ camp? What’s keeping you guys busy?
Hey, right now everything is going pretty well, we’re finalizing the preparations of our Mexican tour that will be in February 2016. We got some other cool stuff coming up next year that we can’t announce yet, but we’re working on that. We’re also composing some new songs for an eventual second album.

– WARSENAL is a newband that has just released its debut album so, first off; could you please make some history of the band?
First of all, Mathieu and Francis have been friends for a while and Mathieu started playing guitar and one year later Francis started bass. We then found a drummer and did pretty much a Megadeth and Metallica cover band. We met Antoine in a gig/party where we were playing. We wanted to start composing our own stuff, but our first drummer wasn’t ready for this I guess, so we got rid of him and asked Antoine to join. On our first rehearsal we were supposed to start with Antichrist from Slayer, but we never played the song and right away started composing an original song. We felt that connection between all of us three and we knew Antoine was the man. So that was how Warsenal was born in 2012.

– This debut album is entitled «Barn Burner». What are your feelings on the final result?
We’re pretty satisfied with it. I think it’s a good debut album that will help us get our name out there. We wanted to do a throwback 80’s style album and die hard Thrash and Speed Metal fans seem to enjoy it, so we’ve totally reach the goal we were aiming.

– Starting to talk about the album, why did you pick «Barn Burner» as its title? I personally think it fits the aggression on the music.
Yes, we felt the expression Barn Burner was totally fitting with our energetic music and riffage, bringing something interesting and exciting with our riffs and the tempos changing all the time. Also, Barn Burner was a Montreal Stoner Metal band with whom we played on one of our first gigs in Montreal, when they were on tour with Skeletonwitch in 2012. The band was really riff-oriented, just like we are. We were totally amazed by those guys performance. The band broke-up in 2013 though. So, we wanted to pay them a tribute.

– It’s a super old school and fast Thrash Metal album with some other nuances, but unlike 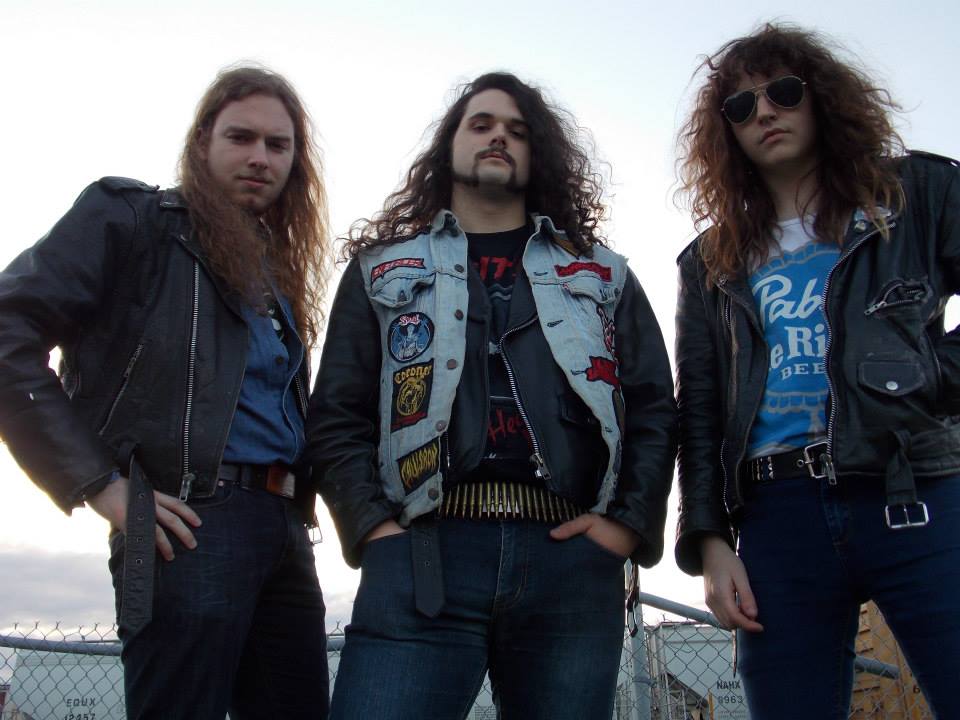 most bands nowadays, isn’t that much on the Crossover side. Did everything end up as you expected?
Yes, totally. We wanted to stand out of the mass, by going somewhere else than the big wave of Crossover Thrash bands happening right now. We just feel like there are too many of them sounding like a mix of Municipal Waste and Violator. It has just become too generic. Don’t get us wrong, we love the Waste and Violator and some new Crossover bands, but there are just too many right now. We wanted to do something a bit different while staying in the Thrash and Speed area, something more surprising perhaps.

– You mix Thrash Metal from different scenes with some Speed, some Punk, even a certain MOTÖRHEAD vibe so, what could you say are some of the most influential bands for WARSENAL?
It’s really like a big melting-pot of bands and musical styles. For Mathieu, it is more 80’s Old School Thrash and Speed bands such as Megadeth or Destruction for example. He’s also a huge fan of Thrash bands’ first album. It’s always fast, true and raw. Added to that a touch of Black Sabbath and new blood’s Enforcer and you pretty much got Mathieu riffs inspiration. For Francis he is more into Jazz so you can feel the groove in its bass and riffs. Antoine is more of a Punk fan so you can feel the energy and aggression when he is pounding its drums. That being said, it would be too restrictive to say those are our only major inspirations. We get some elements from all kind of music. We are really opened minded toward many type of music.

– The sound on the album is really organic and pure. In fact I read you recorded it live, so I guess this is just the best way to get the sound that fits the spirit on your music, doesn’t it? How was the recording and production process?
Indeed, we did a 2 days live studio recording. It was pretty exhausting to rush 9 songs in two days, but that’s the price to pay, since we wanted to keep the true and raw spirit. Same thing for the production quality, it was a personal artistic choice. We don’t like the overproduce, almost robotic, sound of most nowadays metal bands. We wanted to give the listeners the feeling we get when we listen to our favorite 80’s albums.

– Songwriting here feels more mature, even though the three songs from the demo fit perfectly, as you haven’t loose the spirit. Structures are more interesting and tempo changes are also quite attention grabbing. Was the songwriting process difderent?

No, we pretty much kept the same process. Mathieu and Francis find some riffs, put them together and build a song, then show the riffs to Antoine, he puts drums on it and then the magic happens. But we’re definitely going into that direction with the more interesting song structures and the tempo changes. I think we found our sound and we will continue evolving in that direction while keeping the pure spirit of the 80’s Thrash and Speed. 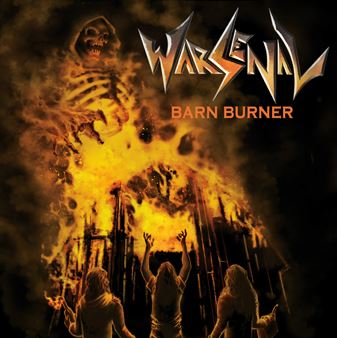 – You also have here plenty tempo changing riffs, in fact guitars I think play a really important role on the album, both with riffs and solos. In fact some guitar melodies create a good balance with the aggressiveness on the album; was this a hard work or it rather came out naturally? As the album feels really honest.
It really all came naturally. The songs most of the time are built around the guitar riffs, so everything just flowed without any major efforts.

– It also caught my attention how a strong presence bass has on the album, providing really singular riffs, maybe even with a subtle Jazz inspiration?
Yes you’re right, like we mentioned earlier, Francis is a big Jazz fan. He actually studied Jazz bass in college and since we’re a three-piece band, we came to the conclusion that in order to step out, we should give more place to the bass, since we can’t do guitar harmonies. Francis usually doesn’t even play the guitar riff and he does his own bass riff, but everything fits together. We just feel it’s more interesting this way as the listener can listen to the album while paying attention to the guitar work, at first, and then listen to it again paying attention to the bass work and he will have two different experiences of the same album. We think it’s a good thing, because, this way, people can listen many times to our album, without getting too bored of it haha.

– Now there are a lot of bands providing a «retro» sound into different styles but; what could you say sets WARSENAL apart?
Euhm, that’s really a good question. I think it’s the fact that we don’t want to bring back a retro sound or mimic the music of some bands that were there in the 80’s, but rather, compose like if we would have been part of the 80’s, and also, probably, our “trademark riffs” with plenty of notes flying everywhere.

– On the other hand, are you aware of what’s going on in the music industry nowadays? Do you dig any of those bands taking back a more “old school” sound?
Oh yeah, we really dig bands like Enforcer, Cauldron, Horisont, Kadavar or Graveyard, for example, who are keeping it old school sound while having their own sound.

– And talking about Canada specifically; how’s the state of its current Metal scene? There are some classics bands such as ANVIL, SACRIFICE or EXCITER for instance and also younger bands into different subgenres, from CAULDRON to CAUCHEMAR. Any new bands worth mentioning?
There are some really great bands coming out of Canada right now. Some new bands, other than Cauldron, Striker, Cauchemar or Skull Fist, worth mentioning would be: Metalian, Droid, Dealer, Black Thunder, Vicious. There are plenty of others, but it would be way too long to name them all.

– All this about «Barn Burner» being said; how could you describe it in just 3 words?
Fast Raw Riffs

– Now before we wrap this interview up, and as the end of the year is drawing nearer, I would like you to tell us what have been your 3 favourite albums of the year as well as the worst one.
Our 3 favorite albums would probably be: Satan – Atom by Atom; Magic Circle – Journey Blind; Raven – ExtermiNation. It would be impossible to choose the worst album of 2015 because it probably belongs to a band we don’t like and don’t even bother listening to. But I guess we can state our disappointment about the new The Sword’s album “High Country”, it really is a good album with some great catchy rock songs, but we miss the old stoner sound with heavier riffs. 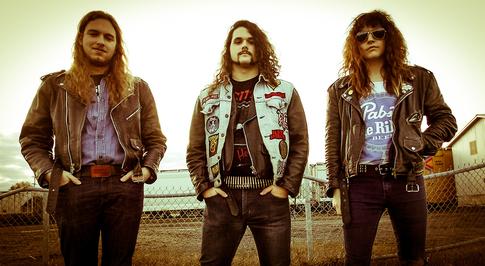 Touring the most places we can to spread our music and composing new songs to have another album soon.

Thanks to you.
Keep it Fast, True and Raw!