– Hello, thanks for taking the time. How is everything going right now with STEELWING? What’s going on right now into the band’s camp?
Riley: No problem at all! Right now we are mostly focusing on the promotion around the new album and on making plans for 2016. We’ve been working our asses off this year finishing this album and then going on a two week tour in the middle of the pre-release chaos so it’s nice to have a short break before we go at it again.

– You have just released your newest album, «Reset, Reboot, Redeem”. What does its title represent it? Could you say it is somehow autobiographical? I think it fits the evolution on the record.
Riley: Yes, I guess you could say it’s an intended double meaning. Mainly it represents a metaphorical “reset” of mankind – such as the biblical cataclysms – in order to pave way for the next step in human evolution, but it also represents where we are as a band right now: shedding skin, presenting a new sound and look and redeeming things from the past we’ve not been proud of in retrospect.

– Here you keep the old school Heavy Metal foundations, but you also add a lot of other elements, as some Speed Metal nuances,a s shown on the title track, also with subtle nods to 70’s Prog I think. Was your intention to create with this new opus something wider?
Riley: Absolutely. When we wrote these songs we decided that we would not limit ourselves to just being a “traditional heavy metal” band, but would allow ourselves to draw influences from whatever we felt like – be it death metal, punk, electronic music, etc. There’s plenty of NWOTHM (or whatever you wish to call it) bands out there and when everyone’s inspired by the same handful of 80’s metal bands, of course everything starts to sound the same, and we did not want to be a part of this anymore.

– In fact there’s so much variety every song has its own personality. Was this something important for you to get?
Riley: Not intentionally, but each song does have it’s own theme and as the music, lyrics and vibe focus in on this theme the songs will naturally pull in different directions. To us as songwriters we will always think each song has its own personality since we’ve poured so much of ourselves in it, but I think it’s a very good thing if the listener actually feels this objectively.

– The aforementioned title track develops really interesting, with changes in its structure and sounds in over 5 minutes. This makes me want to know how was the overall songwriting process for the release and if it was different at all to your previous albums.
Riley: Well, for one thing we worked on these songs for up to three years. A lot of ideas have mutated and changed totally over the years, but we’ve really worked hard on making every song perfect in its own way, not allowing any “fillers”. For the previous two albums the songwriting was much more rushed – we didn’t have time to stop and think about what we were doing and whether it was good or not, we just went with the flow. This time we analyzed and argued about pretty much every note until we were satisfied. It was Alex and me who wrote everything: Alex writing most of the riffs and song structures and me writing the lyrics and vocal melodies, but from there we worked a lot as a band in the rehearsal room to perfect the arrangements together and fitting our different musical personalities and influences into the new sound.

– Due to this diversity I would like you to comment on certain songs on the record. For instance there’s a song in your mother tongue, «Och Världen Gav Vika», which I think has some Thrash, and even Hardcore influences. What’s the story behind this track?
Riley: I had played around with the idea of writing post-apocalyptic lyrics in Swedish for some time, and finally it just clicked with this track. The lyrics are much inspired by the Cold War and the fear of nuclear apocalypse of the time, as well as the Swedish punk scene that often deals with the same lyrical topics. Curiously enough, during the time we were working on this song, there were once again rumoured intrusions by Soviet submarines on Swedish waters… 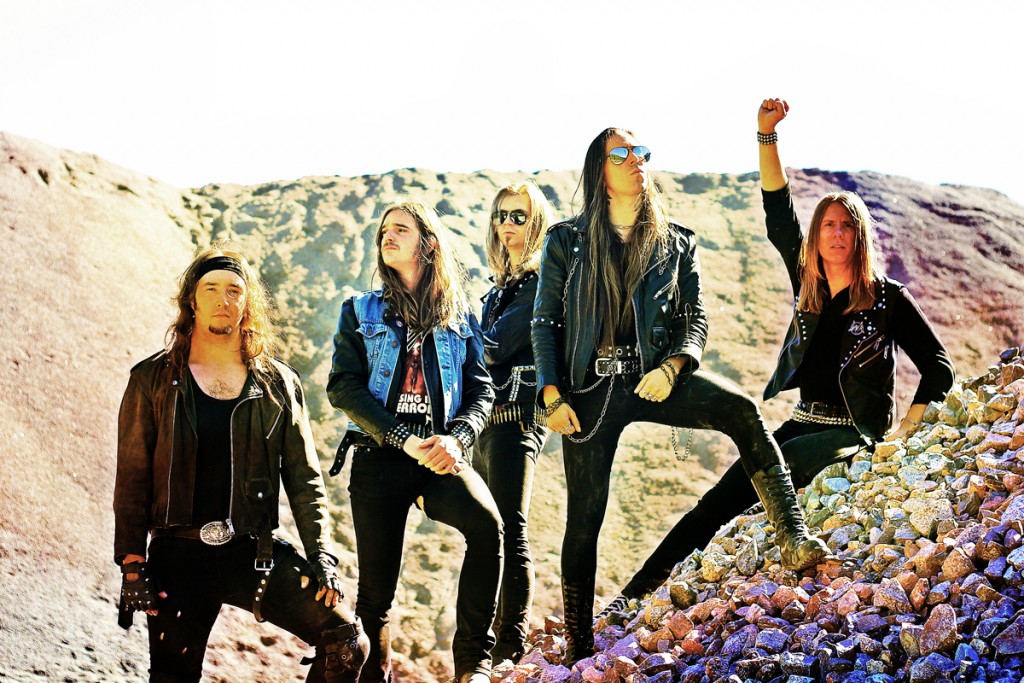 – And also, what do some of the lyrics on the album deal with?
Riley: For me as a lyricist there is a very clear concept which all of these lyrics fit into, it is the misanthropically fueled Nietzschean metaphor of man being a rope stretched over an abyss between the beast and the overman – a volatile hybrid that must chose to either evolve to the next trans-human state or destroy itself. There is a thought behind the track list as well, where the A-side deals primarily with the destruction of mankind and the B-side explores the next step.

– On the other hand “Architects of Destruction” is one of the gloomiest tunes on the album, almost funereal, it even seems to have certain, really subtle Black Metal influence that creates a nice contrast with the galloping rythmn. What could you comment on this cut?
Riley: This was the first song we wrote after the “Zone of Alienation” album and it has changed a lot over the years – we’ve played something like three different versions of this song live. Just before we went into the studio we realized it wasn’t as good as we wanted it to be, so we changed it up again, and then we added even more new elements in post-production, such as the female backing vocals by Meduza Queen, political voice-overs, etc. When it all came together, it turned out very powerful and it really sums up the current state of the world with religious terrorists and right-wing warmongers working together to divide us all with fear, hate and violence.

– Then there’s the epic closing track, «We are All Left Here to die». Over 10 minutes of a brilliant songwriting where instrumentation and backing vocals seem to play an important role and build a one of a kind sonic landscape. I personally think it portraits the whole album. Like suming up in one song everything done on the previous songs. Was this that you wanted for the last song?
Riley: Yes, we wanted the album closer to sum up all the hopelessness and leave a lasting impression on the listener. The lyrics describe what our lives really are, if you strip away all mysticism and superstition – and I don’t mean this in a “fuck it, nothing matters” kind of way, quite the opposite: make the best of your precious time, don’t waste it on religion, patriotism and other bullshit.

– Overall I would dare say this is your most aggressive and darkest record to date. Was this how you envisioned or rather a natural evolution? Or maybe also your perosnal life and feelings in a certain moment in time help shaping the sound of an album?
Riley: I guess we’ve all been through a lot in our private lives during the years we wrote this album and of course that reflects in some sense, but it was also a very conscious decision to make this album darker. After all, that’s what draws you to metal in the first place, the aggression and seductive darkness, and it’s good to take a step back sometimes to consider what you’re doing and why.

– In fact I found a certain MERCYFUL FATE/KING DIAMOND vibe. Is this an influence to you? And what other bands could you mention as an influence for STEELWING?
Riley: Well yes, Mercyful Fate and even more so King Diamond have definitely influenced us, but for some reason I guess we haven’t really let this influence shine through before this album – perhaps because so many other Swedish bands have been doing it already. But as I mentioned before, we have let so many different bands from all kinds of genres influence us this time… For me it’s been The Plasmatics, Emperor, At The Gates, Bombus, Dia Psalma, Dissection, Agent Steel, Huntress, Morbid Angel, Vektor, GWAR, Entombed, Agent Side Grinder, etc., etc… And Alex will be able to name a million other bands that influenced him as well. Of course, our classic heavy metal influences will always be encoded in the DNA of everything we do, it doesn’t take a rocket scientist to figure out we’re inspired by Judas Priest and Iron Maiden, for example.

– So having crafted such a unique album, which I think shows a huge volution in comaprison to your previous albums, could you say what we hear on «Reset, Reboot, Redeem» is your ultimate musical personality? Or is there always room for evolution?
Riley: There is always room for evolution, but I would say this is the first album where we definitely found our own sound, whereas the previous two albums were more of a mix of our 80’s metal influences with a post-apocalyptic touch.

– In fact this album is coming out almost 5 years after your previous «Zone of Alienation» was released. Has this gap of time helped mature the album?
Riley: Very much so, like I mentioned we really took the time with this one to figure out what we wanted to do and how we wanted to do it. We didn’t accept any songs we were not 100% satisfied with.

– All this about «Reset, Reboot, Redeem» being said; how could you descirbe it in just 3 words?
Riley: I think the very title of the album just answered this question for you!

– Now before we wrap this interview up, and as the end of the year is drawing nearer, I would like you to tell us what have been your 3 favourite albums of the year as well as the biggest disappointment.
Riley: To be honest, I haven’t listened to many albums released this year, but three I can think of that I really liked was “The Children of the Night” by Tribulation, “Meliora” by Ghost and “Alkimia” by Agent Side Grinder. Biggest disappointment? Perhaps “The Book of Souls” by Iron Maiden, although I didn’t have any high 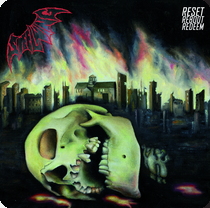 expectations in the first place.

Riley: Right now we’re looking at touring plans and festival shows for 2016 – it’s time to bring the redemption to the roads as well!

Riley: Get your copy of “Reset, Reboot, Redeem” and let it get to you!