1- Hello, thanks for answering to our questions. What are you guys currently up to?
-Khazaddum just released our EP, In Dwarven Halls, both digitally and as a small run of physical copies via bandcamp. We are also busy finishing up the writing process on our full length which will be recorded in 2016. The band will embark on it’s first mini tour in early February.

2- First off, could you make some history of the band?
-The idea for Khazaddum started of as a recording project in celebration of the seminal works of J.R.R. Tolkien. Alex Rausa (ex- Devolving Messiah) came up with the concept of doing a J.R.R. Tolkien themed death metal band. He wrote several songs and enlisted Pete Kissane (Burial Ritual) for drumming duties. He then got Luka Djordjevic (ex- Carnal Befoulment / ex- Promethean Parallax) as the lyricist and vocalist. Luka’s Dwarven like appearance was icing on the cake. Pat Gunderson (H1N1/ Slug Shell) was also enlisted to record guitar. The three track EP, In Dwarven Halls was recorded at Belle City Sound by Chris Wisco in late 2014. Even though the concept was to do a recording project, the band played one show as a showcase of the music. Continuing with their individual live bands, Khazaddum was temporarily put on hiatus. In 2015, Alex, Pete, and Luka started discussing the notion of making Khazaddum a full time live band. They started writing new material and honing in their craft. The decicision was made to officially release In Dwarven Halls, and start playing live shows.

3- How could you describe your sound?
-Khazaddum is unapologetically death metal. While the band derives influences from a wide scope of musical tastes, death metal is paramount. Drawing inspiration from the genres greats, they attempt to capture the epic feel and scope of storytelling comprising the immense Tolkien mythology through music. Combining the tradition of both a technical and melodic approach to deliver death.

5- How is the feedback for your new album being?
-So far so good, The EP was released very recently and physical copies are just now being distributed. So the 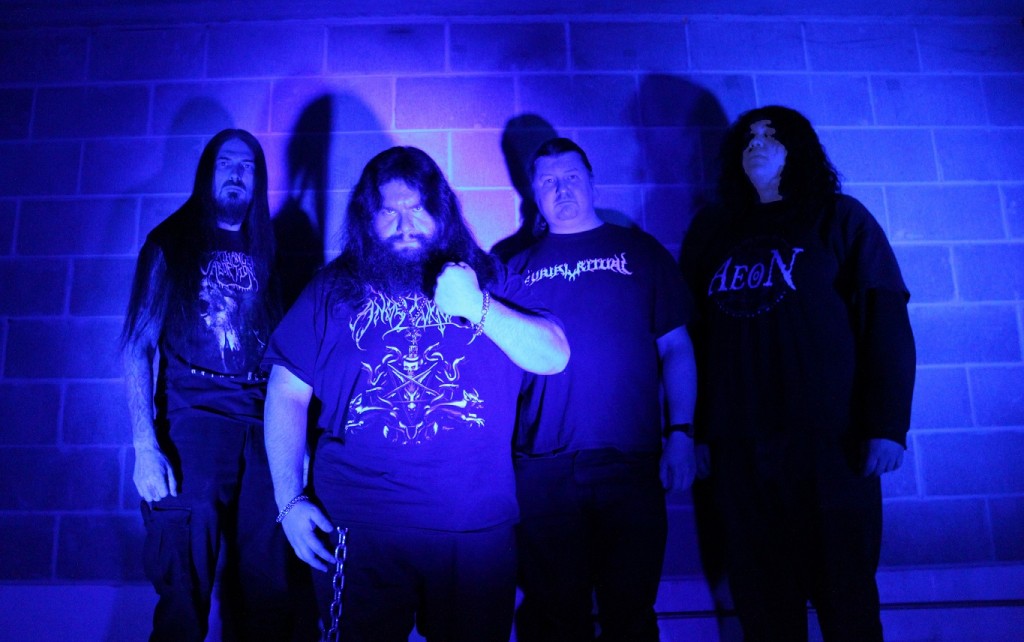 feedback is still in it’s infancy stage, but it has been quite positive so far.

6- And are your personally satisfied with the final outcome?
-In short, yes. The music is a good base and jumping off point as work continues on the forthcoming full length. It was well recorded and produced at Bell City Sound. Also, the visual art on this release was masterfully created by Kosta Djordjevic who in cooperation with Luka will be responsible for all future art duties.

7- How could you describe this opus in just 3 words?
– Tolkien Death Barrage

8- How has the production process for your new release been?
-Every step of the actual production process was smooth. The writing was organic. The actual recording also went very well and turned out sounding powerful. The art conceptually fit like a glove and the overall result is a product the encapsulates the bands vision.

9- And how do you use to work on the songwriting?
-All the music is written in the same manner. Alex writes a song, and demos it to a click track. He then sends it to Pete who writes and demos the drums. Luka, upon hearing this version, comes up with a theme for the song, and writes lyrics. This is how all of the songs have come to fruition so far.

10 – Finally, what are you near-future plans?
-Well, as was previously stated, Khazaddum is doing a mini tour in early February. Playing live shows in support of the In Dwarven Halls release are the plans immediate future. They are nearly done with the writing of the forthcoming full length album which will be recorded in 2016 and is to hopefully be released later that same year. There are also plans in the works for a longer tour also later in 2016.

11- That’s all from our side, thanks again for taking your time to answer our questions. If you now want to add some final words; feel free to do it.
-Khazaddum is an homage to the immortal works and epic mythos created by the modern day Homer, J.R.R. Tolkien. It is our reverence for these tomes anthropomorphized through epic and technical death metal. Thank you Queens of Steel for this interview, and hails for Dwarvan Halls!
Facebook: https://www.facebook.com/Khazaddumband
Bandcamp: https://khazaddumband.bandcamp.com/
Merch: http://khazaddumbandmerchstore.bigcartel.com/
Youtube: https://www.youtube.com/channel/UC2jfXi-j7mIjtysRSKyx9Vg