– Hello, thanks for taking the time. How is everything going right now with REVEAL! soon after releasing your «Scissorgod»? What are your feelings on your new record?
Hey, Crakk here. It’s good, Tania, we’re like a real sharp pair of the biggest scissors you ever laid eyes on. I think it touches better on the essence of what RVL! is and want, the creamy center of what we are I guess.  Like you said, it’s the third one – and to me the record really is about the alchemical three  (3); i.e. the combination of the two(2) polar opposites that makes something new, like a shadow in the sense that without both light and dark (contrast) there’s nothing. You know, like Muspelheim/Nifelheim, or the digital 1 and 0, or two lovers, or whatever. Two has always been fascinating to me, and Scissorgod deals with both sides of what we are. Both power and paranoia, or strength and weakness, and I think that’s liberating; to be the full you, although always crooked.

– Going somehow back to the roots, your started playing under the name of WASTER, after two demos (if I’m not mistaken), you changed your name to REVEAL!, what prompted this and what is the meaning behind the band’s name?  How does it relate to you as a band?
We started really young, and it’s the same band as in 2008 (well, some people change, and maybe you have to cut them loose, snip snip), but we were more or less children with fucked up heads. And if you’re being honest the whole way through, your past is what it is and discussing what was good or bad is pretty pointless. The music has to speak for itself and trying to summarize it in a sentence would just be to color it however it suits me now, and probably speak more of the present than the past. But to change it was probably mostly to mark going from something fun to something serious; a progression that created itself, but we had (and have) to be willing to put every possible drop of sweat, blood and dikk possible into the mix. Why we chose “RVL! or Reveal!” is because it spoke to us, I don’t really want to pick the cleverest band name imaginable; it shouldn’t be about rational logic but like all things in music we rather follow our “magkänsla” (means ‘stomach – feeling’ in swedish and is about what feels right deep down in your middle section, like a primitive sixth sense). 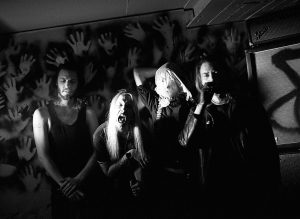 – How much of different entities both bands are?
Yeah I think I answered that above.

– 2011 was the year when your debut album, «Nocturne of Eyes and Teeth» came out, which had a good reception and turned into a highly regarded album into the underground. What did that first relesae mean to you? Did it open new doors to the band and what effect did have on REVEAL!?
I think like most things we make the impact isn’t felt right away, but rather comes slowly but surely.  Like Flystrips; people hated that record when it came but it’s turning into a cult-classic with years, either we’re ahead of the curve or like a mile behind it.

– You almost came out of the blue again in 2016 to release the «Cadmium» single, and a few months later released «Flystrips», your second full length album. What was the band up to during those 5 years?
Well, we took a sabbatical for a couple of years, internal struggle, opiate-addiction, fukked up lives, backstabbing, someone dissapeared for some years without saying anything to anyone.. Shit like that.. life shit I guess, Tania.

– And 3 years later here is your Third Coming with «Scissorgod». Nine bizarre tracks in an insane ambience. Where do such macabre ambiences flow from? How important are atmospheres on your records? It almost feels like being the common thread between songs (even releases) that have each their own identity.
I don’t really know what the difference is between ‘music’ and ‘atmosphere’, it should be the same – right?

– «Scissorgod». A title that paints unsettling images. What is the significance behind it? 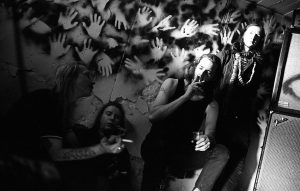 – There’s some new elements on this album, like the importance of wind instruments. How did this come to be? What role do they fulfill in your music? As those electronic noises.
We’ve always used whatever noises or instruments that works best with the music.

– Sound-wise, you seem to sink everytime deeper into unsettling sounds and landscapes. What direction are you heading to? Forward or deeper? Further or below?
Since we burnt all bridges we had, haha, we dig below to get out of this fukking mess.

– How could you describe not just the sound, but the essence, nature of «Scissorgod»? 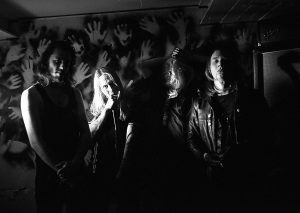 – It’s a creative and honest opus with a certain RNR attitud or Punk ethos I could say, being like a middle finger to standards and not caring for established genres nor compromising, I could also apply the «RNR» focus to the straightforwardness of your songs. Is it just my perception?
No, I would say this is accurate. We never made a difference between subgenres, no problems following blessed are the sick with million dollar babies, or divus de mortuus with strange days.  I think this is the Uppsalian approach, and it is how we grew up.

– One of the words that I think could describe your music is «chaos»(or «madness»), a kind of sonic one, delivered with ferocity and rage. Due to this I would like to know what is REVEAL! and your music personally to you.
RVL! is AIDS in valhall. It is the portrait on your wall that winks in the corner of your eye, and you being unsure if it really happened or if your grip on reality is slipping. It is when your girl is being unfaithful, and you tailing her from her back home from work, and finding out that it’s with your own brother, who died in a car accident 4 years ago. It is the attempt to break out from the same short and horrible nightmare that repeats 20.000 times every fukking night. It is the attempt to break out from this fukking nightmare that begins every morning and pauses when you fall asleep only to begin again when you wake up. It is the attempt to not need drugs every day to deal with whatever part of reality that doesn’t live up to your twisted expectation, even though you live a spoiled life with both running water and heat at home. It is my childhood smashed under a microscope, pissed on, and set ablaze. It is good drugs in my cup, and good drugs in my nose. It is the same feeling I got when I was 11 and heard de mysteriis dom sathanas for the first time and got scared but couldn’t shut off the record player. It is everyone I love in Uppsala, and the reason I’m not dead yet.

– You also manage to evoke a feeling of angst among your listeners, turning «Scissorgod» into some kind of insane experience than just a plain listen. Is this something you strive for? What kind of emotions do you want your music to convey?
I think it gives strenght and pleasure to the ones that are twisted, true and honest. I think it gives the opposite to the people that are normal, faked and false. The sane are feeble of heart.

– It’s one of those experiences that must be undergone in different (altered) mental states. Was it also necessary to be in a certain mindset to write these songs? 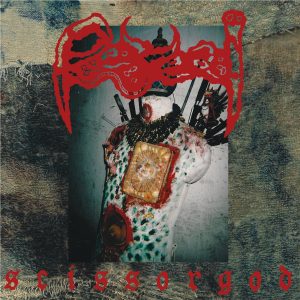 Yes and no. I wouldn’t necessarily call it an ‘altered’ state, but I think you have to be hungry for RVL! to play RVL! or listen to RVL!. But personally, every time I put on the record it takes me there instantly.

– The first thing that caught my attention off «Scissorgod» was its singular cover, in fact you have never had average artworks. What’s the sculpture on the cover and what does it symbolise?
We’ve always been into painting and making art as well as music, which is something a lot of bands should be doing. Because the same people make the music as well as the artwork and lyrics everything really connects and creates this RVL!-‘world’ which you can enter when listening to the album and caressing the cover and shut of your dumb head and space out/in. In the case of Scissorgod, the cover is a photo self-portrait (sculpture) of me/Crakk, and Spine made it into a cover with a disposable camera, some amphetamine, and dirty/bloody rags from some night that went a bit too far as a frame. But it’s meant as a ‘whole’ together with the back and insert. Actually, the sculpture used as cover has a box over the heart which contains an original December Moon demo by morbid, as well as some other highly charged artifacts with poetical power. And every knife is fucked up moment in my life (crakk’s life) which the norns blessed me with. There’s more but I don’t want to spoil everything for eventual buyers.

– All this about «Scissorgod» being said; how could you describe it in just 3 words?

– Finally, what are now your near-future plans?

All my plans end in No Future.

In Hoc Signo Vinces; we are the AIDS of Valhall, the scalp-collecting dogs that piss on moses and the crooked, one toothed smile a child gets when it cuts off the necks of snails with a scissor.
Bye.