– Hello and, first of all, thanks for taking your time to answer to our questions. How’s everything in the band’s camp right now?

Hello, thank you for having us! We‘re doing great so far. We had a great release show for our album and just came back from a mini tour with our friends from Vultures Vengeance.

– Starting to dig into the band, why did you choose the name «Midnight Prey»? What does it mean literally and personally to you?

I think it came by listening to hours of NWOBHM bands really. We were teenagers back then and the name was a result of the good old „let’s put two random metal words together until it sounds cool“ – trick I guess. Although now of course, after quite a few years of band history together, it stands for a lot more. All the stories we can tell and all the people we met along the way, all that is Midnight Prey.

– You play a music style firmly rooted in an 70’s and a little bit 80’s sound. What motivated you to form a band like this in the first place?
For me the sound of that era was always a straight forward approach to music.  We were always listening to a lot of different kinds of music.  But old school Hard Rock and Heavy Metal always seemed to be the core of everything else for us.

– You were formed in 2012. What have been the steps you’ve taken since the release of this debut album?
It has been a long journey until this album. A lot of songs have been written and forgotten. We had some minor releases and some cool shows and also some shitty and/or weird ones.  We learned everything from scratch, so I’m glad we took our time for this release and didn’t rush it.  At the time we went to the studio, we had a good idea of what we want and what we didn’t want this record to be.

– You have just released tour debut album. How are you feeling about it? What are your feelings on the final outcome now that it’s done?
It feels great. Holding your own record in your hands is always a very satisfying moment and I think we‘re all pleased about the final product. Nevertheless you should never relax! We are collecting ideas and looking forward for the upcoming songwriting sessions.

– There’s Hard Rock, there’s Punk, also NWOBHM… What have been the main musical influences for MIDNIGHT PREY? Are there any new bands (let’s say from the last 15-20 years) that have inspired you?
Of course we all listen to loads of the classic stuff. Deep Purple, Motörhead, Uriah Heep.. you name it. But I guess our biggest musical influence is the fact, that there is no «main» influence. I listen to everything. If a song makes me feel in some way, it’s a good song. No matter if it’s Hip Hop, Jazz, German Folk or electronic music. There are still great and innovative bands out there as well. I went to show from Black Midi lately. How the hell do you even call this genre? I don’t care, but that show was intense!

– And what does inspire you outside from the music realm? It can be a moment, a trip, a memory, a book…

– The album’s title, «Uncertain Times», seem to have a subtle social touch, but it can be interpreted in several different ways and relate to it also on a personal/emotional level. But what does the album title mean personally to you?
We are not only a band, but best friends as well and we have known each other for many years now. When we moved to Hamburg from the south of Germany we had rough ideas about our future, but no actual plans. That time is where a lot of inspiration for this record came from.

– «Uncertain Times» is a very dynamic album, quite diverse, but it feels like that sense of darkness is what ties all tracks together. How easy is to get equilibrium between diversity and cohesion?

That’s hard to say. A lot of our songwriting happens in the moment. But I suppose we all have a similar understanding about how a song should feel and where it should go from a certain point.  At the same point we were never afraid of trying something new. None of us ever says „we shouldn’t do that, it’s not metal enough“ or „not punk rock enough“. If it sounds good, it sounds good. 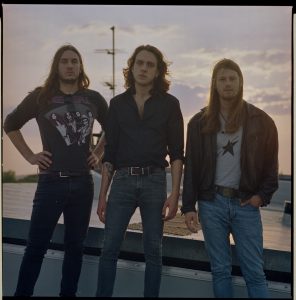 – After having released a few short-length releases, did you approach differently the work of those compared to the work you did behind this full-length?
We had a bit more concept, concerning the sound we wanted to achieve, I guess. Otherwise it was mostly straight forward.

– And how could you say has the band evolved and grown in musical terms since you were formed?
Like I said, we learned a lot along our way. We got better at our instruments. Not good, but better haha. We always try out new stuff and I think we will never stop to do so.

– Was it easy to get the sound (production-wise) you had envisioned? It sounds very crispy and almost analogue.

As a matter of fact it was easy, yes. But that is only due to our sound-engineer Jörg and his studio Soundlodge. He really understood our vision and brought it to life. The instruments are recorded pretty much as they are, without a lot of sound processing, just amps and microphones. I guess that’s the reason why it feels analogue to a lot of people, even though most of the signal chain was digital. We try to achieve live sound in studio, not the other way round.

– As I said, you seem to specially draw from the 70’s, what did that era had that is missing in today’s Rock/Metal scene??

– All this about «Uncertain Times» being said; how could you describe it in just 3 words?

– And finally, what are now your near-future plans?
We are going to start writing new songs for our next release. Besides that, there are some plans for a special format I don’t want to say too much about right now. But you should definitely stay tuned!

– That’s all from our side. Thank you once more for answering to our interview. If you’d like to add some final words; feel free to do it.