–  Hello and, first of all, thanks for taking your time to answer to our questions. How’s everything going in the band’s camp?
Hello. Everything is fine, thank you. The first rehearsals for upcoming live shows started some time ago.

–  DIABOLIC NIGHT a pretty new band that has is about to release its debut album so, first off; what motivated you to form it? Were you sure since the beginning that you wanted this to be a one-man band? Why?
I started Diabolic Night more than 6 years ago. It has always been my ambition to write down my very  own vision in a musical form. The concept behind Diabolic Night doesn’t fit to the typical band structure where everyone brings in their ideas. It wouldn’t be the same in the end. With Diabolic Night I enjoy the  freedom to express my own vision exactly as I feel it. In a full time band, it’s usually the case that everyone wants to contribute their ideas in some way, which is completely justified, but not for Diabolic Night, that’s why I want to keep this as a one man project.

–  You play a very traditional Thrash Metal with elements from different styles, from Heavy Metal to Black Metal. Did you have a clear vision of the kind of music you wanted to play with DIABOLIC NIGHT and how you wanted it to be aesthetically?
The songs I write reflect exactly the music I listen to since my earliest youth. I think the biggest influence  for everything is the traditional Heavy Metal which is responsible that Diabolic Night sounds the way it is. For more than 15 years now the same albums ended up on my turntable. If you still get the same emotions as when you listen to these records for the first time, I think it has an enormous influence on the music you write by yourself. You automatically get back to the same kind of music – you build up your own world and sink into it.

– How did you come up with the name? It is a way of starting to build a dark imagery?

The night had always a huge impact on our lives and everything around. The night swallows the light, every shadow is absorbed and returns as one – the only thing that remains is total darkness. This is what Diabolic Night is about. 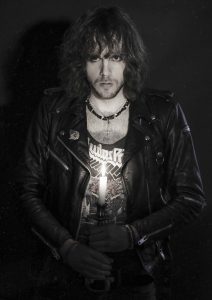 – Your first releases (demo, EP and single) were released through your own label, Mortal Rite Records. What differences have you experienced working with a label such as High Roller?
I couldn’t have found a better collaboration than with High Roller Records. As you mentioned I released my previous discography by my own label «Mortal Rite Records», where I was able to gain a lot of ​experience. Due to the growth of Diabolic Night in the past years, it’s not longer possible for me to distribute this as a one-man label, so I’m happy to have High Roller on my side. The promotion and advertising are going absolutely well and since the official announcement that I signed the contract, lots of people became aware of Diabolic Night for the first time.

–  And now you have just released your debut album «Beyond the Realm». Do you approach differently the work of a demo compared to the work you did behind this full-length?
The «cornerstone» of all releases has always remained the same. I wouldn’t say that the past releases are much diferent to each other. But there has been a constant development from one record to another, yes. Compared to the previous releases, the traditional, classic Heavy Metal content can be noticed in a stronger way on “Beyond The Realm” than it was before. This results to a very dynamic way of playing and the album «breathes» through a lot of melodies.

–  You  focus a lot on great guitar leads, being a very guitar-driven album. In fact some guitar melodies create a good balance with the aggressiveness on the album; was this a hard work or it rather came out naturally? As the album feels really honest.

As I mentioned before, due the fact that the “roots” of my musical interest since my earliest youth has  always been my favourite, traditional Heavy Metal records, it was a rather natural development that melodies like you hear on my album were perpetuated on “Beyond The Realm”.

– The bass also plays an important role I’d dare say. Did you have a clear idea about how you wanted this album and every instrument to sound like?
When I started to work out the concept for «Beyond The Realm», I already had my final vision in mind, right from the beginning – How the record shall sound like, what the lyrics shall be about and what it should express visually. It was very important for me that the bass takes the dominant role in certain parts of my songs. In a lot of albums the bass stays in the background and doesn’t come alive. I wanted exactly the opposite to this. As a very important influence I would like to point out Geezer Butler’s bass playing on «Heaven And Hell» and Ian Hill on «Stained Class».

–  Anyway I think you have a trademark element; behind this speed and the overall straight-forward approach there’s underlying a very dark vibe.  Do you put a focus on the overall vibe or does it just come out naturally?
It’s a very important aspect for me to create an atmosphere also within the songs, not only in an intro/outro. It comes out naturally. Especially when you create a song, everything around comes together and breaks down like a big wave overall.

–  Where does this darkness come from? Books, movies, a painting, a moment…

When you mean the darkness or rather the atmosphere in my music it mainly comes from my vision to  life. Of course you get inspired during your life through specific moments and music or any source of inspiration. Paintings like Thomas Cole’s “Voyage of Life” or german expressionism of the 1920s also had a huge impact on me.  ​

The listener shall sink into the world of “Beyond The Realm” and its content of what the record is about.

– «Beyond the Realm» isn’t a concept album but I think most lyrics have a certain common thread, that most of them revolve around similar concepts, which are they?
«Beyond The Realm» has become a very personal album, with which I also immortalized certain experiences of the past years. I want to give the listeners the opportunity to create their own vision without going deep into the content of the lyrics now. «Beyond The Realm» symbolizes the never-ending fight between good and evil which lasts forever, even after death. A few songs are closely structured into each other and can be read as story, although I don’t see the album as a pure concept album. In this case the content of some songs stands too much for themselves.

– All this about «Beyond the Realm» being said; how oculd you describe it in just 3 words?

–  Now there are a lot of bands providing a traditional sound into different styles but; what could you say sets  DIABOLIC NIGHT apart?
I think an important fact is that I don’t limit myself to one genre, everything flows into my music that has always inspired me – besides of extremely speed structures, it’s also a melody that needs to stuck in in my mind. I never cared for stereotyped thinking of playing only kind of genre even if it’s  clear that the “cornerstone” of Diabolic Night has its musically structure deep in European Metal (Especially from Germany and Scandinavia) like it was done 30-35 years ago. 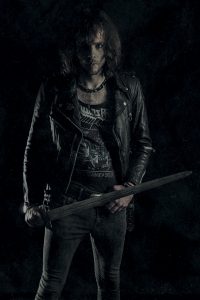 –  On the other hand, are you aware of what’s going on in the music industry nowadays? Do you dig any of those bands taking back a more “old school” sound?
There are a few bands out there which I really like and who do their own thing without trying to sound frantically like it was recorded in 1984.

–  And finally, what are now your near-future plans? You have a live line-up. Are there any touring plans?
I got a live line up, ready for the first live shows next year, since the last gig in 2015, so I am looking forward to present the songs live on stage. Further news will follow soon.

–  That’s all from our side, thank you once more for answering to our interview. If you’d like to add some final words; feel free to do it.

Thanks for the interview and the support.