1- Hello, thanks for answering to our questions. What are you guys currently up to?
We are about to release our debut EP Volume One: Morpras and trying to focus on out of town shows to promote the album. We have also been applying to every awesome Metalfest we can and plan to have a tour based around the festival dates (pending we get on). Additionally we are pushing hard for endorsements to get the band recognized on a more professional level. We have also made some play through videos and lyric videos for fans to check out!!

2- First off, could you make some history of the band?
The Band started with Connor  Adams (vocals) and Corey Skerlak (guitar and vocals) making a “Macabre” style death metal songs for fun. After writing a few, the band decided to get a band together and Bryn Herbert joined the band first on bass. It took the band a while to find a drummer and get ready for shows. We basically hibernated and focused on writing our debut EP. After the band connected with John Thomson (drums) we they played our first show in Calgary at Lord Nelsons with Stab.Twist.Pull, and Burning Effigy put on by d Annihilatrix Productions. After fully entangling John into the band, we recorded their first EP Volume One: Morþras at Hillbilly Wizard Sound. The EP was mixed and mastered by Dan Swano, founding member of Bloodbath, at his studio Unsound Studio. After we played a few shows we band decided to get another guitar player and Tres Thomas joined the band on guitar to complete the band and complete our three headed vocals attack!!!

3- How could you describe your sound?
The sound of the band can be described as a earlier death metal style, now coined as a “Murder Metal”. Early on we had a large focus on our songs being about serial killers, but as the band grew and evolved we started to included subjects such as horror films, aliens, and conspiracies. We do try to bring in other sounds and styles, some of our new songs have some black/thrash metalish style riffs. We like to use samples to enhance the aural sensations we try and bring through our songs. With either actual words spoken by the killer,audio from news footage and eerie noises.

4- What are the band’s main musical influences?
The biggest influence for the band starting was Macabre a Murder Metal band from Chicago. Since other members joined the band, the influence has been open to a much more diverse sound due to the different music tastes of the members, which nice because it brings a lot of ideas and opinions to work with when writing new music.

5- How is the feedback for your new album being?
We’re about to find out. There has been a lot of positive response to the bands demos leading up the this EP. There is a lot of excitement for people to get their hands on this upcoming EP and we can’t wait to hear what people think. Its been a bit of a process with having to get some samples we have on the album cleared with CBC. After that and the physical production process was completed it was just a waiting game for the EP to come in.

6- And are your personally satisfied with the final outcome?
Yes! I could not be happier, the recording was done at hillbilly wizard sound here in Edmonton by our good friend Greg Wright.We sent the e.p over-sea’s to get mixed at mastered at Unisound Studio by Dan Swano (founding member of Bloodbath) which really beefed up the EP. Sonically the album is very heavy and aggressive, yet sounding clear, and we are very pleased with how well the songs represent the story’s we tell about various victims and honorific tales.

7- How could you describe this opus in just 3 words?
Reality is scary.

8- How has the production process for your new release been?
It was a learning process, we thought we were really prepared for going in the studio with our pre-production. Luckily, we got a chance to use some really interesting recording techniques for our drums, and Ginn Guitars was kind enough to lend us one of their Titan Azure model guitars to track the songs, so over all we were really happy with the process and the overall sounds and tones we got. We would highly recommend Hill Billy Wizard Sound for anyone needing recording! 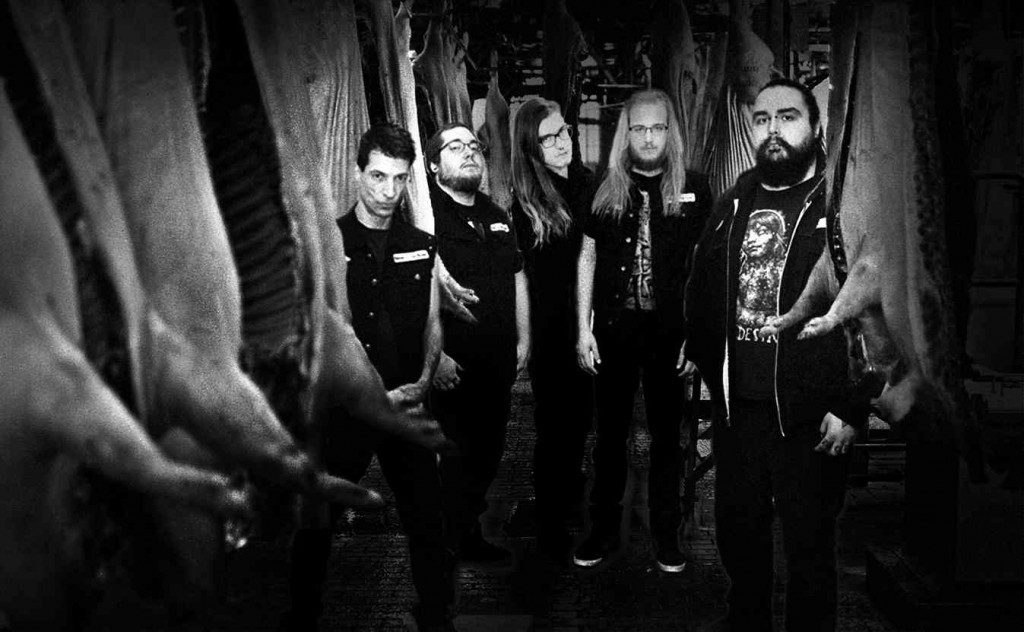 9- And how do you use to work on the songwriting?
The stories we hear that impact us the most are the ones we tend to write about. We do a lot of research on the people and topics that we sing about to ensure we have the most accurate details in our songs. We want to make sure that we are not glorifying these murderers instead using the medium of Death Metal to convey these gruesome stories and kind of scare people, for lack of a better idea, into knowing that these are real and not a celebratory event.

10 – Finally, what are you near-future plans?
Our plans are to get on the road and do as many shows as we can to get our music out to as many people as we can. We are planning a lot of video related content such as play throughs, lyric videos and video updates to keep our presence on social media strong. We want to keep people interested in coming out to our shows by continuously writing more material and having an energetic performance . We also want to have support from companies willing to provide us with instruments to ensure that we can keep making frightening music.

11- That’s all from our side, thanks again for taking your time to answer our questions. If you now want to add some final words; feel free to do it.
Our music may be about some realities shocking events, however we want to remind the listener that we are only retelling the stories for the victims and to promote awareness, not to glorify these killers.