1- Hello, thanks for answering to our questions. What are you guys currently up to?
R: Hi. Thanks to you guys for the interview! Well, we’re currently promoting our latest release “Formula For Anarchy” as much as we can. We just came back from Europe and it was amazing as usual – we did Brutal Assault Festival in Czech Republic, and several gigs in Russia, Romania, Croatia and other countries. A couple of weeks ago we played in a festival here in Santiago alongside acts like Gojira or Lamb Of God – it was pretty cool. IN the next weeks we will be traveling through Chile to continue promoting the new album. Fortunately, everything’s going great so far. We are really happy and excited about this new material.

2- First off, could you make some history of the band?
R: The band started in 2003 under the name Nuclear. From 2006 to date, we have released 5 studio albums under different local and international labels (“Heaven Denied”, “Ten Broken Codes”, “Jehovirus”, “Apatrida” & “Formula For Anarchy”). Musically the band plays an old school thrash mixed with raw punk from late 70s and 80s. We try to keep touring as much as we can as it is probable what we love to do best. In 2014 we inked a deal with the English label Candlelight Records and, in a way; it is kind of a new start for us. It has been really difficult for the band to be constantly paddling out against the current and the signing came in the best possible time. We have still 2 more albums to go with Candlelight so we are excited about things to come.

3- How could you describe your sound?
R: It is definitely angry and intense. We don’t care about the trends or what someone else might expect from us sound-wise. We just do what we do, we do not over protool anything, just try to bring back the essence of what we used to hear back in the day and make it sound fresh.

4- What are the band’s main musical influences?
R: Thrash Metal, Punk, Hardcore and Old School Death Metal – all mixed together. We do not consider ourselves as purists in metal. There are always great aspects in other genres that we try to incorporate to our music. Some of our favorite bands are Kreator, Discharge, Benediction, Sepultura, Napalm Death, and many others.

5- How is the feedback for your new album being?
R: Very good so far. We’re very happy with the reception of the new album; we have had very good reviews and great feedback from the audience at every gig. As soon as the album was released -June in Europe and August in United States- we have received nothing but good words about it. We are really happy with the result and Candlelight’s work. 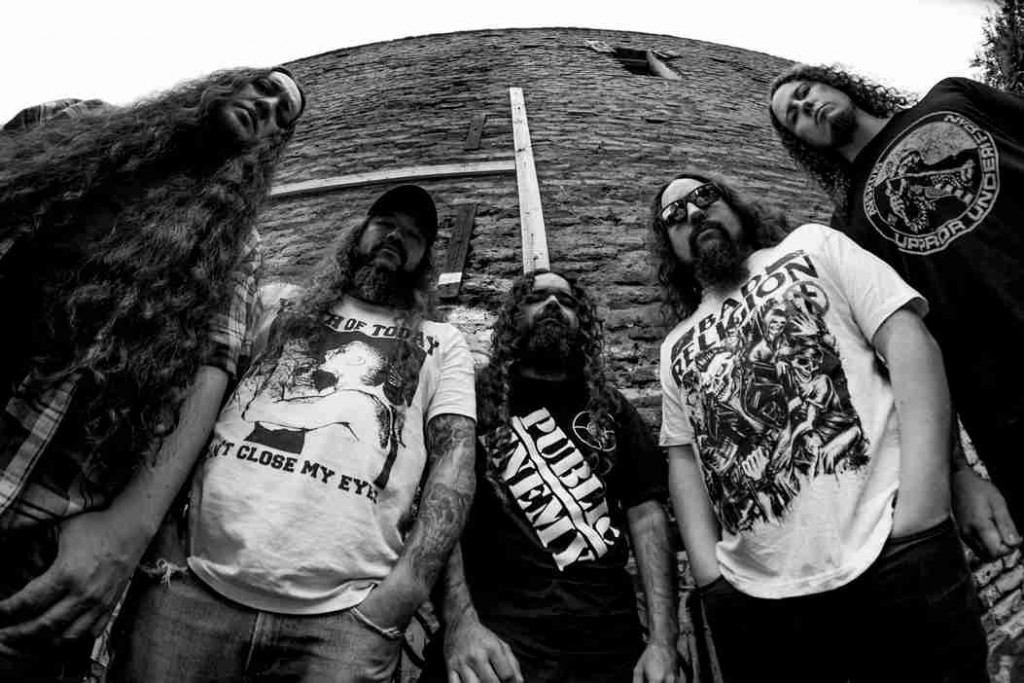 R: Totally! We worked very hard for this album. After the European tours of 2014 we came back and locked into our rehearsal room to write the new stuff for months. We wanted it to be 1 step ahead from the last one and I think we achieved it. We knew the album would come out through Candlelight Records so we had some extra pressure in that sense. At the same time, we did not want it to sound mechanized or unnatural so we decided not to use the metronome and just play as natural as possible. We loved it. It is practically our rehearsal room inside your headphones!

7- How could you describe this opus in just 3 words?
R: South American Violence.

8- How was the production process for your new release?
R: From the beginning it was how to «move» our rehearsal room to everyone’s speakers. We spent some time to figure out how to sound in the album as close as we do live and I think we finally did it. Sebastian Puente -one of the guitarists- lead the process and he always tried to make it simple. Drummer started first playing along with both guitarists inside the recording room trying to just feel it. It was great. Once those tracks were laid down, everything just flew. The complete recording was done in 1 week. Insane!

9- And how do you use to work on the songwriting?
R: It is a team work. Usually it starts with a riff idea from Francisco or Sebastian, and then we include a lyric idea from Matias or Francisco or just play it a couple of days without lyrics. Sometimes we have a new lyric idea and music is just made upon it. Independently every idea is heard and analyzed by the band and we usually try to finish the songs together. I think diversity is the key to a fresh composition. At least it works for us.

10 – Finally, what are you near-future plans?
R: We plan to continue promoting «Formula For Anarchy» everywhere we can. Perhaps release a new music video. We have some exciting gigs to play here in Chile – we will be returning to cities we have not visited in a long time so you can imagine. Also, we started next year’s tour plan!

11- That’s all from our side, thanks again for taking your time to answer our questions. If you now want to add some final words; feel free to do it.
R: Thanks to you guys. It’s been a pleasure to answer to your questions. We would like to invite all metalheads reading this interviewto know more about the band by visiting our website www.nuclear.cl or to give a listen to our albums in Spotify, Deezer or iTunes. Check out «Formula For Anarchy» and stay supporting underground metal everywhere! Cheers.
Nuclear
www.nuclear.cl
www.facebook.com/nuclearcl
https://twitter.com/nuclearthrash