1 – Hello, lots of thanks for answering our interview. How is everything going into the IN-QUESTS’s camp right now?

MiQe – Everything’s just dandy, we are alive and kicking. The new album is finally out; we just had the release party which was awesomely fun and lots of new shows coming up.

2 – You have just released «Chapter IIX – The Odyssey of Eternity», 4 years after your previous album came out so, what have you been up to during this time? As you didn’t play many gigs in between either.

MiQe – We wanted to really focus on the new album, fine tuning the whole concept to get the best possible end result. This is why we decided to say no to a lot of gig offers and only do the bare minimum shows. Of course there were a couple of very good gigs we felt we really had to accept anyway e.g. Euroblast Festival 2012 Germany and support for Hypocrisy (End of Disclosure Tour), to name a few.

3 – How is the feedback your new opus is getting so far?

MiQe – So far reviews and fan reactions been very positive which is really awesome. A Polish magazine already gave 10/10 so we could not be more satisfied.

4 – This has been your first record with bass player Frederick so, how has ffitted in? And what could you say has he brought new to IN-QUEST?

Of course as a new member, the creative process is hard to get in to. Although everybody got their input in the music, the writing of the album is mainly done by Douglas, Gert and myself. But there are so many other things that both Frederick & also Korre contribute, in Merch designs, taking care of the multiple web channels, packing and sending out merch orders etc. Everybody more or less grows in to their own roles in the band and believe me, there are more than enough things to take care of.

5 – Dwelling into this new opus; what’s the main concept behind it?

MiQe – Eternity is the massive concept and the obsession of the number 8. We spend a lot of time (an eternity) researching the concept and song structures.

6 – After giving the album some spins I could say is your grooviest so far. Was this something you were striving for?

MiQe – Indeed, we wanted to focus more on catchy grooves this time, but still keep the typical in-quest hypnotics and technicality as we always strive to do. Personally I think this is one of the best efforts we done so far, technical brutality with lots of groove is definitely something that I enjoy.

Frederick – using 8 string guitars on this album pushed us to write more groovy stuff. The fast picked riffs like on Made Out Of Negative Matter don’t sound good on the low F# string. It gets messy when played so low.

7 – Anyway it maintains the technicality of «Made out of Negative Matter» but with more catchy moments. Could you say you have created a more accessible record with this new one?

MiQe – For sure the previous album we went for a more Technical and Avante Garde direction and pushed the envelope in a more “jazzy” technical direction. But we felt for the new CD we had to reflect more on groove and catchiness. So this CD is for sure way more accessible. We already think ourselves it is kind of the missing link between “MooNM” and The Comatose Quandaries album which proceeded the previous.

Frederick – It’s more easy listening than the “MooNM” but that doesn’t mean it’s “instant” metal which you get after one spin. You’ll discover new melodies and sounds after every listen.

8 – There are some new elements, as no blast beats. What was the main reason behind this?

MiQe – We wanted to introduce more of a sphere element this time and for that reason we felt that blast beats would not really fit in. Live we still play a lot of faster songs from older CD’s with tons of blasting moments, so we still get the aggressive outlet for ourselves and fans anyways.

9 – You have also used 8 string guitars, how do you say has this affected the sound on the record? I personally think it helps getting a lower and heavier sound.

MiQe – 8 strings and hypnotic leads indeed helped to get a more deep and dark atmosphere on the CD. We tried also tried a different vocal approach which got a more spooky feel to it. 8 string guitars on this 8:th release are also some of the reasons why we decided to write about eternity/infinity since the infinity symbol is an 8 on the side.

Frederick – like said earlier we wrote slower and groovier stuff. We used really thick .90 strings on the low F# string and real tube amps instead of digital recording to keep a natural heavy sound without going into “djent mode” with that industrial machine-like sound. The bass of this album is also tuned in F# but instead of going lower than B I tuned my E string up. We kept a rather warm bass sound to make that F# sound lower.

10 – There’s a great balance between different and some new musical influences wih that heavy sound with a superb melody for instance. Considering this is a really dynamic record, has been something easy to get?

MiQe – Not at all, it has been a long and hard writing process to get all the structuring, hypnotic leads and vocal layers to fit together. The foundation (Drums & main Rhythm Guitars) of this production was recorded with Jochem Jacobs (ex-Textures) @ Split second Sound in Amsterdam. But most of Leads, Bass and vocals we did ourselves in Douglas “DougTape” Home Studio.

11 – Anyway you have never done the same album twice. How important is for the band to renew yourself and keep things interesting? Could you say this can be a challenge both for your listener as for yourself? 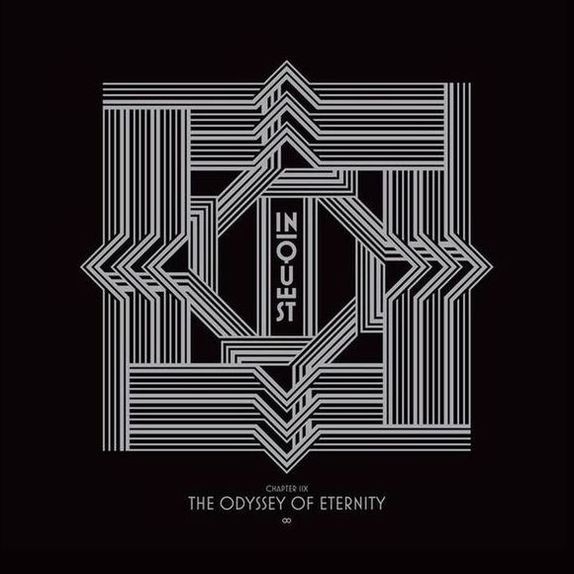 MiQe – I agree on this point, this has always been a goal for this band to not get stuck in trying to repeat the same kind of album over and over, which for sure can be a big challenge. But In-Quest was never about taking the easy way out. We have always strived to push our limits and try to be as innovative as possible. This can sometimes make it hard for the listeners to get into or understand a new release, but we cannot always please everybody and mainly write this way mostly for our own development. I think that is probably also a big part of why most labels never really showed that much interest in us since there is not really a big market for a band like us.

12 – All this about «Chapter IIX – The Odyssey of Eternity» being said; how could you describe it in just 3 words?

13 – And finally, what are your near-future plans?

MiQe – We are planning a video shoot at the moment for one of the new tracks. Hopefully we can land some more foreign shows soon as well and of course to start making plans for the next CD.

14 – That’s all, thank you once more for answering our questions. If you want to add some final words; feel free to do it.

MiQe – Thanks for the inverview and hope to see you on a show in the future. If you don’t know the band, plese feel free to check out out on our land page www.in-quest.be and links to youtube, FB, bandcamp, etc. Spread the word!!