– Hello and, first of all, thanks for taking your time to answer to our questions. How’s eveyrthing going in the band’s camp?

We are approaching the release of our new EP/MLP as well as the new full album so it feels good. I have not listened to the recordings since the mix/mastering so it will be nice to listen to the vinyls when they show up.

– As this is our very first interview with you I would like to start from the beginning. You started in 1990 as DESIDERIUS. What kind of activity did you have during that period?

In the early years it was a young and novice band that tried their way and tried to find the right style, so to speak. We recorded some more or less official recordings and did a few gigs. Then there was no activity during 1994-1996. After that, the band started up again and rode on with various line ups and album releases until 2007. Then time for resurrection again in 2017.

– How your sound evolved into a slower, doomier direction?

In the beginning it was a mixture of tempos and maybe more speed tempos in the arrangements. But the albums written during 2002-2006 gradually became heavier. The most recent albums since the resurrection are generally very heavy material, but there are parts with a little up-tempo too.

– You had a good run ad a quite creative period until you split up in 2007,what prompted that?

Certainly several reasons. But a combination of lack of inspiration, motivation, lust and lack of time. As well as things that happened in private life.

I had started writing some riffs in the same style and was thinking a little about Runemagick but no serious plans. I think the real reason was Daniel at Kill-Town Death Fest in Denmark who once again asked us about having to play at the festival 2018. When we made the decision to say yes, the corpse began to live again… creativity started to flow! 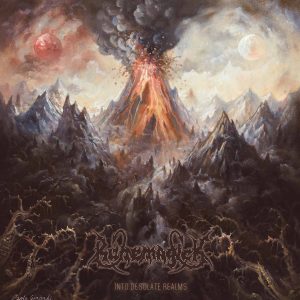 – During that hiatus all of you were involved in different projects, some new some older. What have you brought from the experience in new, fresh projects to your two latest albums with RUNEMAGICK?

Hard to say but hopefully you develop as a riff-writer and composer. Then surely new influences are added to the writing without thinking about it or planning it yourself.

– Very early on your career you managed to be signed to Century Media or to work with people like Andy LaRocque. How did that feel your a young band?

It was a good time. Century Media was and still is a big company so we were maybe a little too small band during that time but it was still a good time. I knew Andy before and helped him in the studio for a number of years.

– In fact your new album «Into Desolate Realms» was recorded between your own studio and Andy’s Sonic Train Studios. How did everything go?
The drums were recorded at Andy La Rocque’s Sonic Train Studios. Daniel and I were there for two days for rehearsals and making the last adjustments in the arrangements of the songs. And we recorded drums on all the songs in the studio. Then we continued with guitar, bass and vocals in our home studios and in the rehearsal room. Johan Bäckman did the mix and master of the album in his Raven Noise Studio.

– I think you’ve got a clearer sound that makes some elements on the album have a bigger pressence, almost a subtle epic vibe. Was this how you envisioned the album or do things work in a more spontaneous way?

We wanted it to sound like classic Runemagick but try to get some more life (or should I say Death) into the sound especially with regard to the sound of the instruments. The drums were partially pre-mixed by Andy as we recorded. We wanted the drums to sound good but a little dirty and without using triggers/samples. For the guitar sound we made a mix of my old classic Runemagick guitar sound and another amplifier that had more of the «string sound». So we used two amp signals for both guitars. Then the bass guitar is quite dominant in the soundscape but it gives a heavy weight in the overall sound.

– One of those elements is the almost sinister psychedelic that helps enhace the whole atmosphere. Where do your atmosphere/imagery come from? Books, movies, moments…

I find that much of the inspiration and creation grows out of myself in some way. Hard to explain. I write a lot of the music in my head, ie without instruments in my hand. Then I try to document with simple demos as soon as I can.

– And what feelings or images do you want to convey with your whole sound?

It varies. Everything from a bleak future of doom, a reset of everything and the like. But also topics around other dimensions, astral deities and ancient history.

– It’s obvious you have your own identity, and every album is different still being familiar so, what does define the sound of RUNEMAGICK?
That question might be easier for a listener to answer than it is for me. But I guess we have a special style in the riffing and song structures – our sound is perhaps a bit unique in itself.

– And is evolution a constant process for the band?

That’s not something we plan. But it might be boring if everything sounds exactly the same. But I like to hear that it is Runemagick but that we can still weave in some new things now and then.

– The cover artwork was crafted by Paolo Girardi, it has his signature style and his skills, as it is impressive. How did you work on it?

Yes he is a very good painter! Great respect! We already had a vision for the cover and I drew a simple sketch that he started from and it turned out really good! 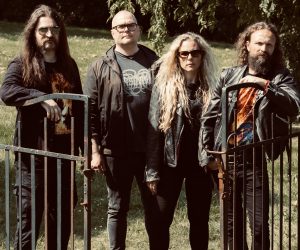 – On the other hand, after several years working with Aftermath Music, «Into Desolate Realms» is coming out via High Roller Records. What happened with Aftermath? And how did the collaboration with High Roller arise?

We have had a good collaboration over the years with Aftermath and still have good contact, Haavard is a nice guy! High Roller is a bit bigger as a company and therefore has more resources like better distribution etc. And we do not feel that the label is too big for us. So when we got in touch we decided pretty quickly that it felt right to try something new.

– All this about «Into Desolate Realms» being said, how could you describe it in just 3 words?

– And finally, what are now your near-future plans? With RUNEMAGICK or with any of your other projects, as for instance I’ve seen you just got back to SACRAMENTUM.
This year there are many releases with Runemagick. New EP/MLP “The Opening Of Dead Gates” in September and the full album “Into Desolate Realms” in October. A split vinyl with Chthonic Deity and several reissues on LP and CD. There are currently no shows booked in the fall. But next year we have booked 3 festivals so far. Possibly there will be a few more dates. Then I am fully booked with other bands and projects like The Funeral Orchestra, Den Tunga Döden, Gravfraktal, Saltas and as you mentioned Sacramentum will play a few gigs next year. I am very busy this and next year so to speak.

Thank you very much for the interest and interview! I hope you all will join us into desolate realms!