1- Hello, thanks for answering to our questions. What are you guys currently up to?
Jesse (Bass/Vocals): Hey there, we are hanging out. What are you doing? Oh, also we’re drinking a beer and working on new material as always. This weather is really the best for digging in you know what I mean? I go back to work tomorrow after an amazing summer off. Someone’s got to teach the kids.

2- First off, could you make some history of the band?
Russ (Guitar/Backing Vocals): Sure, I’ve made history out of less. Oh boy. Jesse and I met through a common friend in 2006 and he came on board to play bass in a band with me that shall remain nameless here and pretty much forever going forward.  The two of us decided a year or so later to form our own thing and explore a heavier sound, which we did, naming it Prostitution, and brought on Ben Bloom from Aberrance to play drums.  After I took a year or so off to switch coasts around 2014, we reformed Prostitution with Jason Spence playing the kit this time and here we are.

3- How could you describe your sound?
Jesse: Ever watch the movie War Games? Pretty good, huh. Watch that a few times over, then put on Dark Side of the Moon on repeat for several day, mix it with some blueberries, and a healthy does of black metal and there you have it. Guess there’s a thrashy glam component too. Wouldn’t want to forget that.

4- What are the band’s main musical influences?
Russ: Personally, I don’t listen to much music that sounds like what we do, but I can try to guess at what the band is influenced by or sounds like as a unit.  I think we all grew up on late 80’s/early 90’s music; Lots of progressive rock like Yes and Floyd, and pop music like The Beatles and The Ramones.  I know Jason loves grind music.  I love Tame Impala. I love Ulver. It really goes all over the place.  I think the other guys listen all over the boards as well. 2 kinds of music right? Good and bad.
Jason: Uh, huh, uh (inaudible groaning)/ I like early Sabbath, Discordance Axis, and Gwar

5- How has the feedback for your new album been?
Jesse: Well, since it’s not out yet, a little hard to tell. I played it for a few people and they really liked it. Maybe they were just blowing smoke up my ass, maybe not. Wonder what that would feel like.
Russ: When we play the songs on the EP live, people seem to like them, I think they stand out from the older stuff, which is a good thing, me thinks.

6- And are you personally satisfied with the final outcome?
All of us: Yes 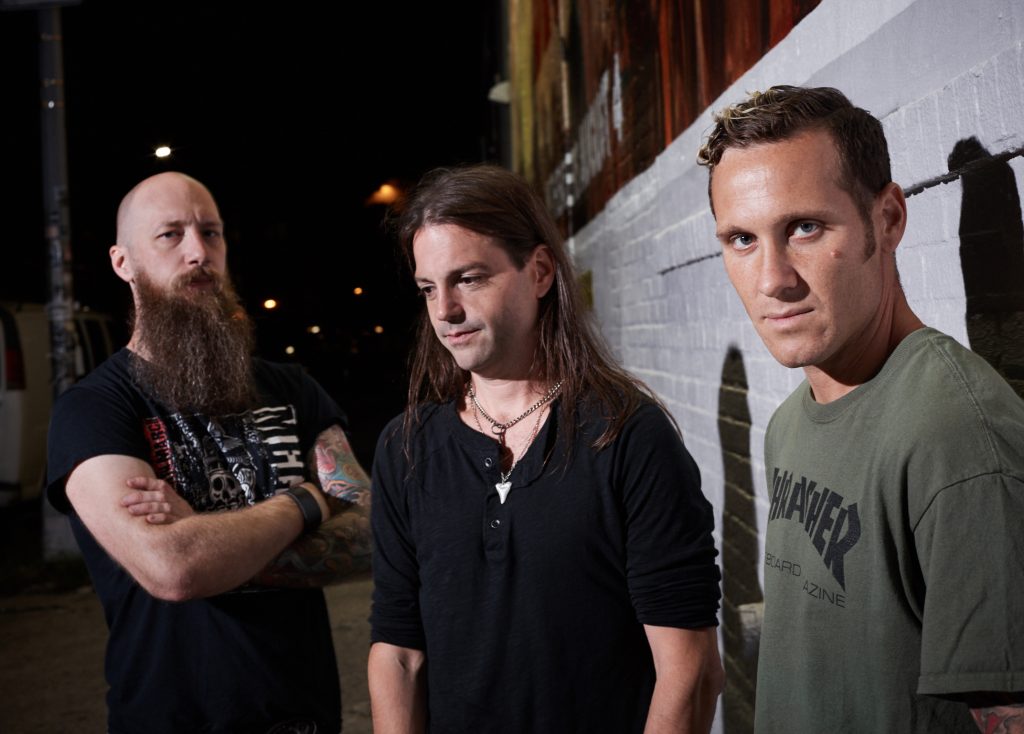 8- How was the production process for your new release?
Russ: Exciting.  Anthony and Ray were absolutely amazing to work with and such cool dudes.  I was living in Mountauk, Long Island at the time and so the tracking was done individually with bass, drums, and guitar basics being done on 3 separate days if I recall correctly.  I think we all felt pretty relaxed during tracking and it led to pretty groovy performances, which is nice.  The end result speaks for its self.  We added vocals, overdubs, and sprinkles. Boom….there ya go.

9- And how does the songwriting process work?
Jesse: Usually starts off with acoustic guitars. We like to hear each note so there is no bullshit. When you play with distortion, delay, and what have you it’s hard to hear what is actually going on. We prefer clarity. One of us usually comes in with a riff, then we just keep on going. We all have our strong points. Russ brings the heat and provides some of the hottest riffs known to man, I’m good at arranging and piecing it together, Jason, well Jason provides a stern fatherly bearded back beat which really ties it all together. Sorta like that rug. See what I did there? Do you?

10 – Finally, what are you near-future plans?
Russ: What I’ve been doing a lot lately is kickboxing.  It’s a new up and coming sport, so I think I might stick with that for now.  I can’t really figure it all out now…. Was I close on that?
Jesse: I’m going to keep dominating. All I wanna do is continue play music and dominate some more.  I guess one day it would be nice to live somewhere else, maybe California. Yeah, that would be cool. For now we are going to march forward as a band and see what comes of it. We’re hungry and have the goods so that’s a start.
Jason: I should probably quit drinking cause I’ve been getting kicked out of a lot of bars lately. Also, I’m gonna keep reading this StarWars picture book, it rules. On a serious note, I’m going to continue to advocate for dogs (pitbulls are my fav) that have been abandoned or abused and need an new home.

11- That’s all from our side, thanks again for taking your time to answer our questions. If you now want to add some final words; feel free to do it.
We are very grateful and lucky to have what we have. Thanks for listening.