1- Hello, thanks for answering to our questions. What are you guys currently up to?
No problem thanks for the interest, this is Holly and Jeff. We have a lot going on that we’re excited about. At the moment we’re getting ready to release our second Album called Execution Of Violence, which will be released on Oct 13th.  We’re also getting ready to go on tour through Colorado, New Mexico, and Texas. The tour kicks off on the CD release date.

2- First off, could you make some history of the band?
Holly and I have always wanted to start an old school death metal band. And in 2013 we had the opportunity to do so. We had Joe in mind right away since we knew him from our local scene and knew he was into exactly what we were. We found our drummer Ryan from an ad online. He gives drum lessons and after I asked if he could recommend any good drummers he coincidentally was thinking of forming a band in thew same style. We all clicked and started writing right away.

3- How could you describe your sound?
We started out wanting that old school Swedish death metal sound, and obviously we have that element for sure. We are inspired by that chainsaw guitar tone. But I think we have put our own twist on it as well. There are definitely some influences from styles other than Swedish death metal and that’s what makes us Bloodstrike.

4- What are the band’s main musical influences?
I think first and foremost it’s all about the riff, or the songwriting. We like simple, catchy, heavy songs. There are some great tech bands out there but for us you have to be able to head bang to a riff rather than having to listen for where the beat is going. So the obvious ones for us are Grave, Entombed, Unleashed, Entrails, you know all those great Swedish metal bands. There is also bands like Bolt Thrower, Slayer, Morbid Angel, At the Gates, Black Sabbath. The list could go for days. If it’s heavy and done well we like it.

5- How has the feedback for your new album been?
Well we’re pretty tight with new material and as of right now the album isn’t out yet. But the response from our inner circle has been very positive. We’re pretty stoked about the new material so we’ll see when it comes out on Oct 13th.

6- And are you personally satisfied with the final outcome?
Absolutely we are. We’ve been working hard on this album starting immediately after In Death We Rot. We’ve logged more time as a band and it shows in the songwriting and riffs. This album feels more like Bloodstrike just starting to hit our stride. We’ve also stepped it up with the production of this album. Our new friend John Bart Van Der Wal mixed the album. He did a killer job. Then we passed it off to Dan Swano to master it so needless to say we’re super stoked with that.

7- How could you describe this opus in just 3 words?
Brutal / Heavy / Classic 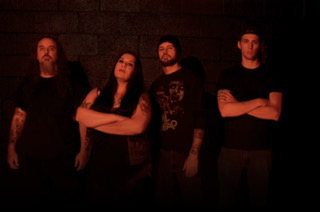 8- How was the production process for your new release?
We have our own studio so we record whenever we want. We would record practice on a regular basis. So pre-production lasted as long as needed. Then we were ready to record so it was easy for us to transition into that. We all put in the hard work to put these songs together.

9- And how does the songwriting process work?
We let it work itself out. Anyone can come in with an idea and we all contribute to the process. We do have 2 main riff writers in Joe and Ryan, Holly writes all the lyrics and I write some riffs and help with song structure and vocal melodies. I also become the producer when it comes time to record.

10 – Finally, what are you near-future plans?
We’re pretty stoked to have our second full length coming out on Oct 13th. After that we hit the road for a two week tour with our friends (Forceps) from Brazil. It should be a blast. After that I’m sure we’ll start working on album number 3. We’ve already kicked around a few ideas about that album. We have ideas of touring outside the United States and hope to do that sooner than later.

11- That’s all from our side, thanks again for taking your time to answer our questions. If you now want to add some final words; feel free to do it.
We’d like to thank you for taking the time and interest in Bloodstrike. Keep an eye out for us cause we might be coming through your town. We are going to keep forging on and don’t plan  on stopping anytime soon.
Horns up! Look for us at:
http://www.bloodstrikemetal.com/
https://www.facebook.com/bloodstrikemetal/
https://bloodstrike.bandcamp.com/