1- Hello, thanks for answering to our questions. What are you guys currently up to?
Hello there.  This is Srikanth from the band Bevar Sea. We’re currently busy with the album release work. We’re planning a few shows in India to promote this as well, so the management is working over time.

2- First off, could you make some history of the band?
I (Srikanth Panaman) started this back in 2007-8 as a hobby project, and once we hit a stable line up in 2010, we decided to take this seriously. Our first album came out in 2012 and this is our second album that’s coming out on October 31st this year. We have done a great job improving a lot about the first one, so we hope the crowd likes it as much too.

3- How could you describe your sound?
We’re a stoner doom heavy metal band. Each of those elements vary in ratio depending on the song but those are the keywords I’d use.

4- What are the band’s main musical influences?
Cathedral, High on Fire, Trouble, Black Sabbath, Sleep and many more. The first album was way more stoner and the second one is more metal and less blues influenced.

5- How is the feedback for your new album being?
I think people have felt that the second album is definitely different musically and also has improved production and performances. That’s pretty much what we feel too.

6- And are your personally satisfied with the final outcome?
Quite satisfied. We spent a lot of time since recording the first album on understanding our sound, the tones, the kind of mix we’d like, etc. We learnt how to play better and also learnt how to record and produce better. I think it all comes across in the final output.

7- How could you describe this opus in just 3 words?
High on Cathedral.

8- How has the production process for your new release been?
For the first album, we recorded everything at our home studio, but for this one, we really wanted big drums and guitars that are cranked loud to the point where we would get induced feedback. That is where good tones lie. We also wanted to use a few fancy mics that our poor home studio can’t afford. The only solution was to go around the 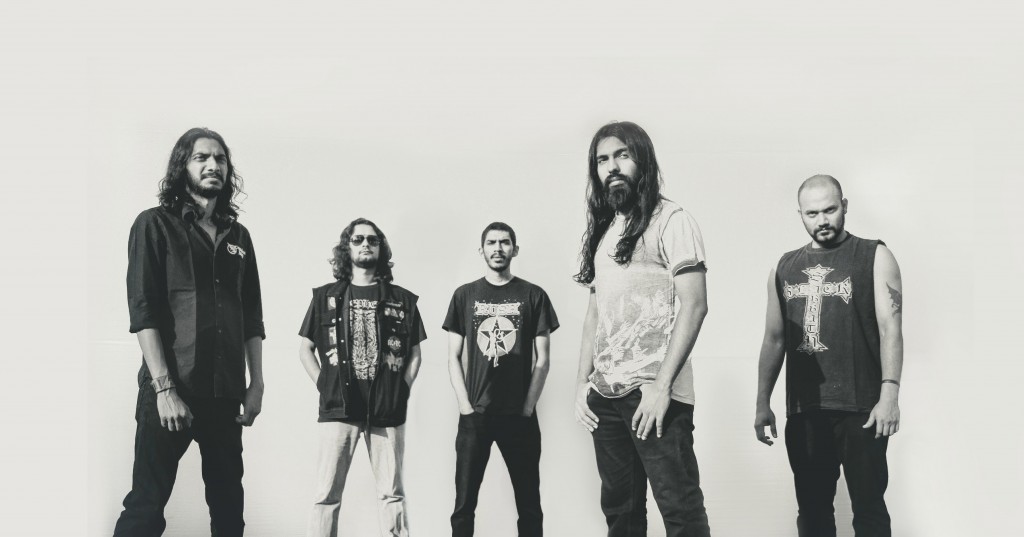 city looking for that big drum room and the mics. We found that and we rehearsed and finished writing before we went to the studio so it was all well planned and executed perfectly. We were very happy with the results after recording, but Matt Lynch (from the band Snail) took it to another level when he mixed it. We’re a content band at the moment!

9- And how do you use to work on the songwriting?
I first go at it on my own. I use a drum machine software on my tablet, set it to a comfortable tempo and come up with riffs, and more riffs that can go with the riffs I already liked and then come up with a rough structure with what I have. I then show them to the other guitarist of the band Chacko, and we work out two guitar parts and I brief him on what I’d like from him in terms of harmonies and solos. We both then take it to the rehearsal room and start arranging it with the drummer and the bassist, and once we’re decently happy, we’d get the vocalist in on the new song and then fine tune the arrangement till we’re happy. That’s how we go about writing a new song. All the songs I wrote were done this way, except the acoustic tune Heathen which was written by Chacko when I was recording the drums and was arranged pretty much while in the studio.

10 – Finally, what are you near-future plans?
We want to give this album the promotion that it deserves and then take the band to the next level. We also want to get some tour dates in Europe planned for the near future as we’d like to play to the core doom audience soon. Otherwise, we’re just planning to write and record more after a few months.

11- That’s all from our side, thanks again for taking your time to answer our questions. If you now want to add some final words; feel free to do it.
Thank you for supporting the underground from halfway across the world! Watch our bandcamp and Facebook pages for the latest on the new album, and help spread the good word if you like what you hear.