– Hello Kaiser, thanks for taking the time. How is everything going right now with AD HOMINEM? How is everything going (your feelings, reactions, etc.) with the release of your newest album, «Antitheist»?
Hi, well everything goes as expected, Osmose is satisfied with it so am I. It’s a new step in AdH disco and this is a good thing, for sure. I hate repeating myself so these changes are a good omen, in any case. For sure some people will always be disappointed with whatever you do, but who cares as long as the diehard remain faithful, not counting those who’ll get into AdH while they weren’t before. In the end I just don’t give a shit really, as long as I’m satisfied myself.

– After working on a more industrial way (so to speak), with programmed drums, you used again a real drummer. How did you think it could fit the album?
Actually I didn’t use any drum machine since the first album. “Dictator…” sounded more industrial but it was a real drummer. This time I wanted to give a more human feeling with a more rock’n’roll touch.

– In fact the overall album I think it has a less ambiental approach, or at least ambiences are not as importantt as they were on the last, let’s say, two albums, being more straight forward and somehow dirty. Was this the idea you had in mind? Do you plan everything with your albums or is it more of a spontaneous effort?
Depends on what you call ambiences. All I can tell you is that I planned this album to be groovier, as well as I didn’t want to use many indus samples. But hey, I now feel like doing industrial stuff again, so who knows how the next album (if any) will sound!

– Talking about such, there’s more to the album than just Black Metal, it also has some Thrash or even a bit of Death Metal I could say. Due to this I would like to know what different kind of music are you influenced by or what kind of music do you listen to, as in the past you have even had some Industrial nuances I think.
AdH always had thrash/death influences, that made the project different from the casual black metal stuff. I actually listen to different kinds of music, from rock/metal to electronics. I’ve been listening to stoner, sludge and globally rock bands lately. I guess I also want the songs to be more interesting to perform on stage. I’m bored watching brutal bands, so why would I compose such stuff?

– This fits perfectly the themes on the lyrics, which are your usual themes, kind of prising the end, but with maybe a bigger focus on religion (antireligion that is). Could you say «Antitheist» somehow works as a whole? The cover artwork also depicts this quite 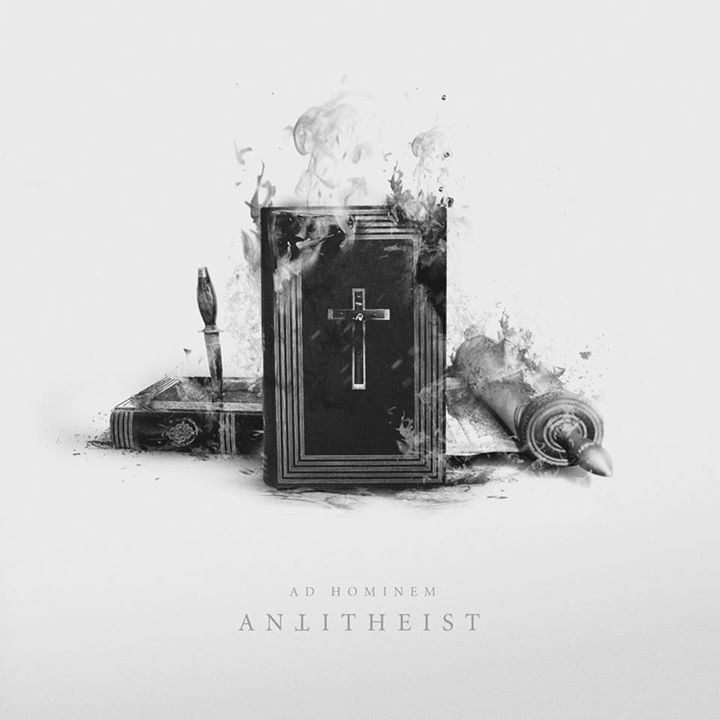 good. In fact your covers have always caught my attention, as tend to differ a lot from an album to another. Would you mind to elaborate a bit on the artist and how was he artwork crafted? How did the idea arise?
Yeah, “Antitheist” is the quintessence of what the project stood for since the beginning. It is the gathering of all ideologies behind it, with a new dimension (musical and lyrical). D Studios made the artwork, and it’s far the best I’ve ever had for AdH. I just asked him something simple, mainly white. I imagined something more abstract, but when I saw the front cover I found it was the classiest ever, still being brutal.

– Your music is, as always, fuelled and filled with a special, powerful, hate and rage, and it seems to be an important part of th essence of the band. Due to this I would like to know what kind of emotions you want to express with your music and transport to your listener.
As I don’t calculate anything, it will be tough for me to answer this question properly. I guess it’s all the anger and hatred in me that are unleashed through my music. It’s hard for me to write more personal / philosophical / so-called smart lyrics, as what I compose for AdH only inspires me brutality towards those I depsise.

– All this about «Antitheist» being said; how could you describe it in just 3 words?
Listen to it (3 words aren’t enough to describe it).

– Finally, what are now your near-future plans? That’s all, thank you once more for answering our questions. If you want to add some final words; feel free to do it.

Thanx to you for supporting the band. Now the time has come for playing those songs on stage. So keep yourself up on www.facebook.com/adhominemofficial, as tour dates are online there. Cheers & keep hating.