– Hello and first of all, thanks for taking the time. How is everything going right now with MAGISTER TEMPLI? What are you currently up to?
Abraxas: Howdy! And thanks for taking an interest. Right now we are pretty busy with the release and tour planning, but we will soon be out playing again, starting at No Sleep ‘till Dublin in the end of August. All in all I would say that it’s a good time for us.
Baphomet: Hi, and yes, a lot of stuff going on. Looking forward to get the album out and to play live again, especially now that we have some of the new songs in our set.

– Next month you will release your second full-length album, «Into Duat». How are you feeling about it? What are your feelings on the final product?
Abraxas: Had you asked me two months I wouldn’t have known what to answer, because we spent such an intense and long period searching for flaws in the sound and so on. But now I think I like it. It feels well-rounded, the concept is properly covered and the songs sound sort of nice together. I’m still a bit surprised that it’s getting such great reviews, though; I had thought that this album would be more of an acquired taste thingie.
Baphomet: The songs and concepts are bit different on this album. It was really interesting to explore the Egyptian angle and I like that we were aiming forward and not looking back at what we’ve done before when writing the music. The process after recording is always terrible, because you really can’t go back, but when the cover art was in place and I stopped listening to all the damn details, I started to enjoy the album.

– On previous releases you explored the works of Crowley, and this time you focus (thematically) on Egyptian mythology. How did your interest for ancient Egypt arise?
Abraxas: I have always been interested in religion and mythology, but to be completely honest, if not very surprising, my interest in Egyptian Mythology specifically probably comes from my studies of the Golden Dawn system of initiation and magic, and from Crowleys interpretations of it. 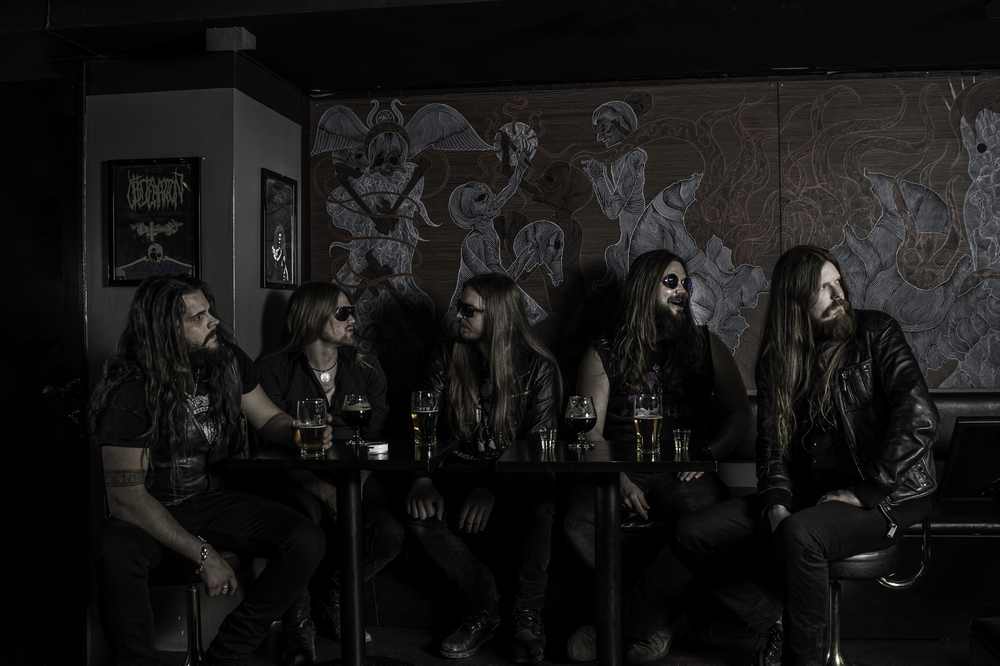 – Anyway it shouldn’t really be that different to writing about certain works of Crowley, as he was initiated into the Hermetic Order of the Golden Dawn, an order that sets a lot of ideas upon Egyptian symbols so, would you say somehow your new album is still part of a somehow similar wide concept?
Abraxas: That is entirely true. I think all my lyrics, even the Lovecraftian ones, are my interpretations, descriptions or expressions of various esoteric processes and states of consciousness. Sometimes very explicitly, like in Master of the Temple from our first album, and at other times more subtle, like for example The Innsmouth Look. So I guess that’s the wider concept.

– In fact it the tracklist order took my attention, starting with «Creation» ending with «Destruction» and with songs such as «Osiris», it seems you are somehow desplaying a variation on the formula of IAO. What could you comment on this? Or is it just my perception?
Abraxas: Now you are impressing me and making me very happy! As you might have guessed, the Golden Dawn system is the core of my being, so to speak. While the title of our last album was sort of a Jeudo-Christian-Platonic, mythological play with the IAO formula, it was actually mostly concerned with the process of the Inner order of the Golden Dawn RR et AC and the eventual aspiration into the Third Order. This album is mainly about process of the outer order of the Golden Dawn, as seen from the perspective of the Adept/Tiphareth. So yes, the album as a whole, and Creation/Destruction in particular is definitely based on the IAO formula.

– Lyric-wise you aren’t just telling Egypt myths, you rather give them some twists and new interpretations. Would you mind to elaborate a little bit on how did you approach the lyrics?
Abraxas: Well, I was both inspired by how the Egyptian myths have changed over the course of the millennia the Egyptian religion was practiced and by how the founders of the Golden Dawn system and later Crowley reinvented the myths and employed them to teach people the esoteric arts. So I guess I decided to do the same, like the creation myth on the album doesn’t really exist in Egyptian mythology as such, but all the pieces are there, Neit is the mother of Ra (the sun god), Mut is the mother of Khonsu (the god of the moon) and so on. So I guess it felt right and interesting to make a sort of sexual-alchemical creation myth about certain pairs of Egyptian gods and goddesses.

– The album is entitled «Into Duat». Duat was the underworld in ancient Egypt, the realm of Osiris, god of rebirth. Why did you decide to name the album like this?
Abraxas: I think it had to do with the movement of the album, starting with the creation and the journey of the God of the Sun, and then it gradually turns darker with Osiris’ death, Horus’ Revenge and Anubis leading the listener into Duat, where eventually also the redemption is found. I really like the Egyptian way of seeing Duat as more real than the world of the living.
Baphomet: It’s also easier to get people to remember the name of this album than the last one, which always has to be shortened to LLL. I saw it referred to as “Lucifer Leviathan Logs” somewhere, like it was some kind of occult lumberjack metal.

– In fact considering the album’s title and its theme the meaning behind the cover seems quite obvious but, does it have any hidden symbolism? Who’s the artist and how did you work on the artwork? 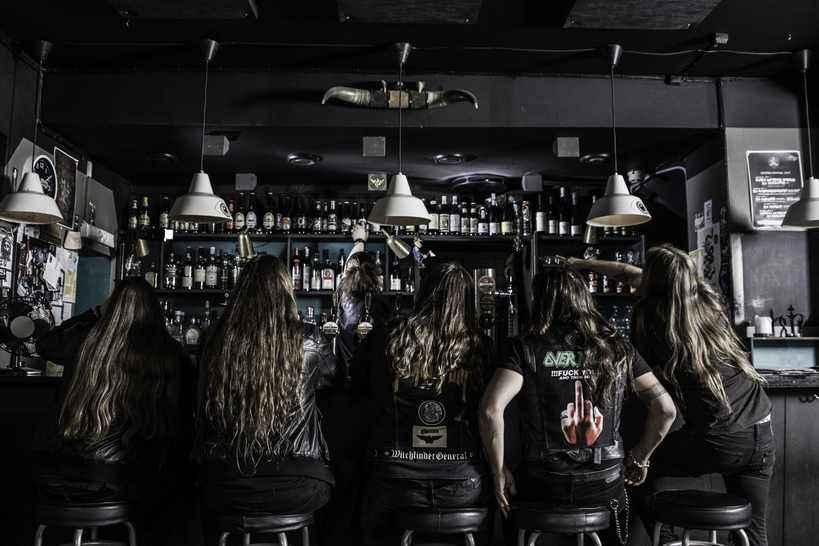 Baphomet: The painting on the cover is done by the German artist Stefan Bleyl. The painting is actually not painted for this release. I had been looking for something that would really stand out and fit the concept at the same time, and after a really long time of searching for the right expression, I almost stumbled upon Stefan’s work, and to me it was perfect. In my head it was the gate to the realm of the gods and the water was the river Nile. I contacted the Stefan, who liked the idea, and we made a deal.

– Musically you sound heavier and less Doom (still there though in smaller doses) with each release. Could you say you’re getting closer to your ultimate sound? Or more confident about what you are doing? As I guess a debut album it may be more of a learning experience, and the second a quest to your own trademark sound.
Abraxas: I think it has been a gradual movement, some of the songs on the first album were quite old already when we recorded them, while the newer ones on that album, like Tiphareth, were pretty Heavy Metal. That being said, we really enjoy the doom spice, so I don’t think we’re ready to let it go entirely anytime soon.
Baphomet: I really don’t know if we are closer to the ultimate sound. We’ve always had a very free writing process. So if it sounds kick ass, we’ll take it into the song. For all we know, we might turn to more doomy things later on, depending on the concepts and what comes natural. I do think we’re getting better, though, both as band and when it comes to arranging songs, but I think our lack of interest in getting a trademark sound, might make things more difficult businesswise, but I have to say I like it like that.

– You somehow follow the path started with the «Nyarlathotep» 7». Was that some kind of turning point? Was this a direction you knew you wanted to follow or rather a natural evolution?
Abraxas: We knew quite early after LLL that we wanted to do an Egyptian album, Actually, I started writing a song about Egyptian Mythology while we were clearing out after the release party for LLL. Nyarlathotep just sort of happened, and being a Lovecraftian figure he wouldn’t really fit in on an album about Egyptian mythology, so we made a 7’’ and a Silent Movie instead. 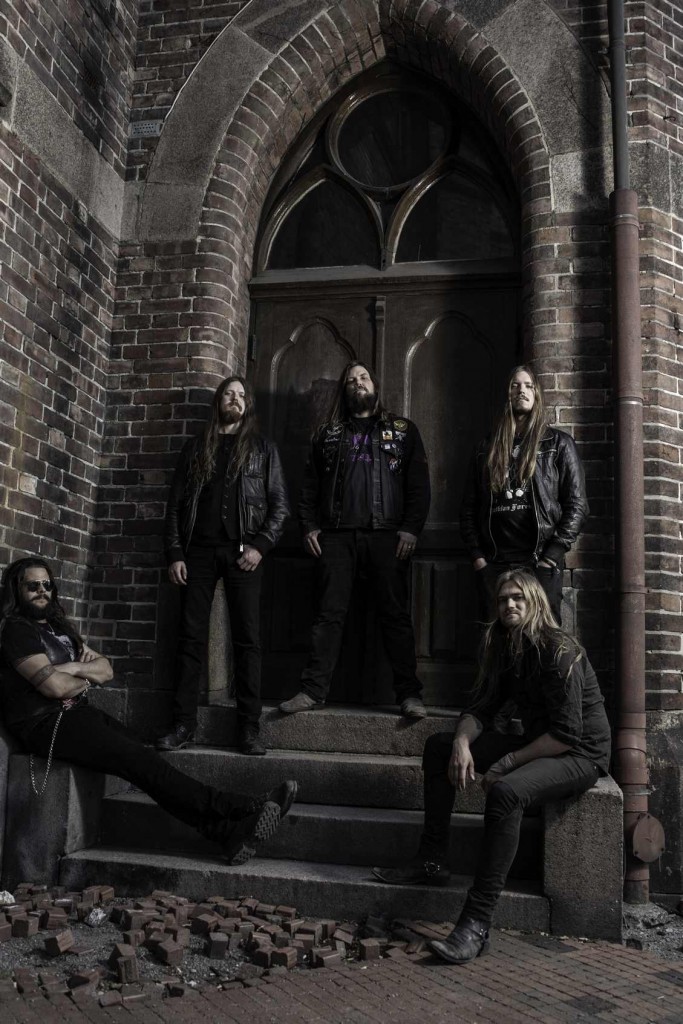 – «Into Duat» is a really dynamic album, does the fact most of you are playing in other different bands help to this?
Abraxas: Maybe, we listen to a lot of different music too, but I think the main reason is the combination of having a concept that has to evolve in a certain way and simply not having any rules when we write the music, sort of letting the inspiration lead us where it wants to.
Baphomet: The idea behind the band was to combine everything we liked in one band. So in every song there’s always a tension between all these influences. In this way, all our different experiences from other projects come together as well, even though Magister Templi is not similar to anything any of us has done in the past.

– In fact some of the songs have a certain assonant tone to them, thanks to the natural changes along with the really organic sound. In certain moments some tracks reminded me to MANILLA ROAD (among others). How important is for you, both as songwriters and performers, to keep things dynamic? While in the songwriting process, is this something you have in mind?
Abraxas: Well, as I said, we try to let the songs evolve naturally instead of forcing a genre on them

– This being said; how did you record the album? It sounds really natural, almost analogue, and it has soul, like a live vibe.
Baphomet: As with all our other recordings, we do things really basic, to get that organic sound. We record drums, bass and one guitar together without click. This way we get the natural noise and mistakes you would get from a live concert and the rise and fall in tempos. Then we simply add the other guitar and some leads, before laying down the vocals. We use only amp gain and a minimum of effects when mixing. You’re not supposed to hear all the details in all the instruments, which is in a way the modern metal sound, it’s how they all come together that’s important. We always get some critique, as some people feel we sound too muddy, but that’s the sound we’re aiming for.

– All this about «Into Duat» being said; how could you describe it in just 3 words?
Abraxas: Isis – Apophis – Osiris… You got me there 😉

– Finally, what are now your near-future plans?
Abraxas: Well, we’re playing in Ireland in a couple of weeks, at a thing called No Sleep ‘till Dublin, then it’s the release and then a three week 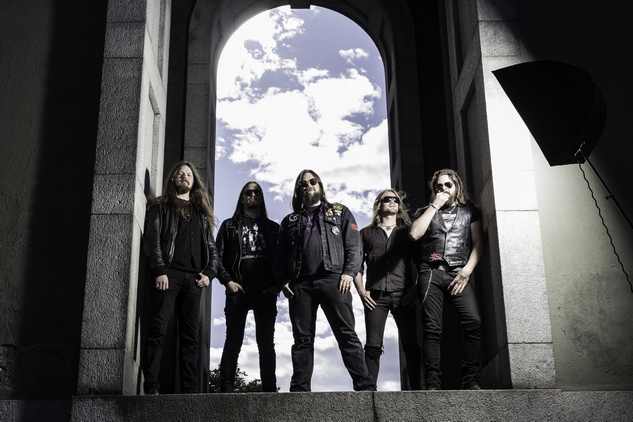 European tour with Christian Mistress (US), after that I hope we get loads of festival bookings, and maybe another tour next year, who knows.

– That’s all, thank you once more for answering our questions. If you want to add some final words; feel free to do it.
Baphomet: Thank you, Queens of steeeeel!
Abraxas: Check out Kêrnyx! A great, all new, Italian heavy metal band! And Dark Quarterer! A very old Italian band, but goddamn, I love it when old bands make great new records, and Ithaca is the best new albums I’ve heard in a good while! Those Italians!