1- Hello, thanks for answering to our questions. What are you guys currently up to?
Hello, thanks for having us. We are working on spreading our recently released album Resilience. We just had a line-up change and we are now preparing the live show we plan to play in the next moths with some gigs around Europe.

2- First off, could you make some history of the band?
The band started in 2013 and the first thing we did was to write down the first songs to experiment and determine the direction the band would have taken in terms of style and sound. After few gigs, in September 2014 we recorded the first demo and first confirmations for 2015 shows arrived. We had a short tour in Eastern Europe in August as well as some shows between France and Luxembourg during the fall. By the end of the year the recording of our first full length was completed and in early 2017 we signed to the Japanese label Ghastly Music: “Resilience” was released on May 5th.

3- How could you describe your sound?
When we started, the whole idea of the band was to include both the death metal sound and elements taken from other genres like fusion and ambient, as well as melodic openings and meter changes. What actually came out is a mixture of these intentions with the playing styles of each member that of course influenced a lot the final outcome.

4- What are the band’s main musical influences?
We have different musical backgrounds, so our influences are quite diversified. Of course our influences include bands like Obscura, Revocation, DevilDriver, Necrophagist, Death, Beyond Creation, The Faceless, Gorod, The Black Dahlia Murder, As I Lay Dying, In Flames, Sadist. Furthermore each member has his own particular influences. For example, in the past years I dug into hardcore punk music and this influenced me a lot.

5- How has the feedback for your new album been?
I think the feedback we had until now has been really positive. We received enthusiastic comments and considerations for our work, and, for some guys that are just starting out a career as a band, this is really important because it pushes us to work harder and to do even better in the future.

6- And are you personally satisfied with the final outcome?
Yes we are all in all satisfied with what came out. Obviously we know where we have to improve and what could have been done better. But as a first album I would say that what we managed to produce makes us proud and confident in the possibility of doing even better.

7- How could you describe this opus in just 3 words?
Powerful, impetuous, insolent. 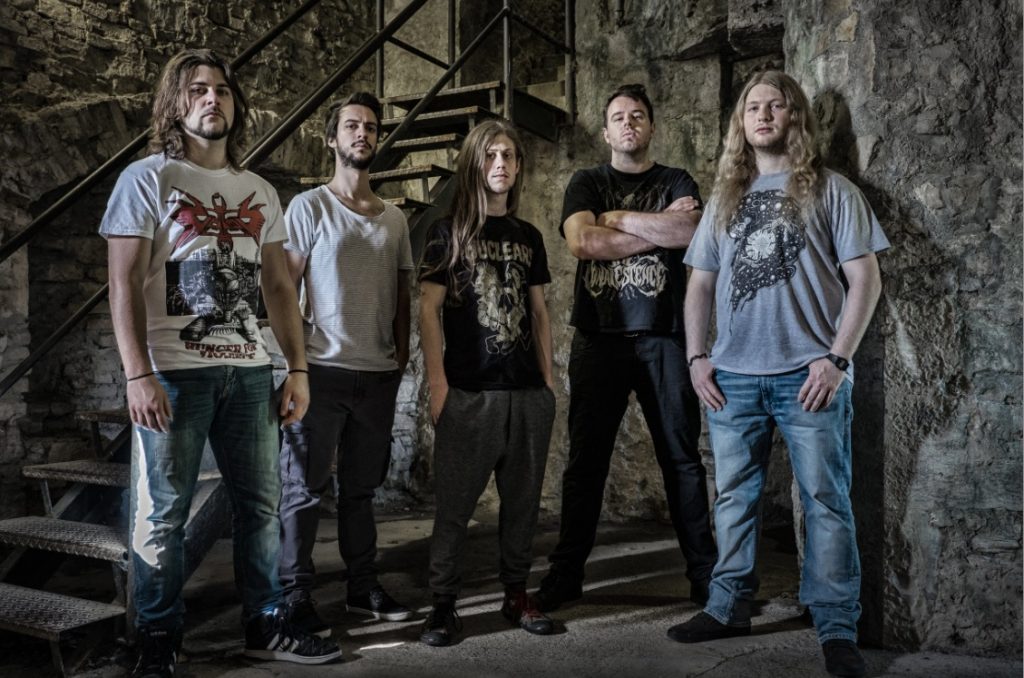 8- How was the production process for your new release?
It was pretty much complicated since we didn’t do all the stuff in a single studio, but the work was broken into pieces and different studios and people took care of each phase of the process. I recorded the drums at Nadir Music in Genova which is Tommy Talamanca’s (from Sadist) studio. Vocals, bass and guitars were recorded in a home studio and then the tracks were mixed and mastered at The Metal House by Ettore Rigotti.

9- And how does the songwriting process work?
As for the writing process of our last release Resilience, the songs were written and structured using mainly Guitar Pro 6. Starting from nearly definitive guitars tracks we wrote down the drums and the bass and finally we merged all together and did the refinements. The vocal parts were added when the instrumental part of the songs was completed.

10 – Finally, what are you near-future plans?
Our near future plans include for sure touring to support and spread our last release. This is actually what we are working on at the moment and we hope we can make some cool announcements really soon.

11- That’s all from our side, thanks again for taking your time to answer our questions. If you now want to add some final words; feel free to do it.
Thanks you too for having us. Cheers to everyone from Integral! Bye!
Social, stores, contacts:
Facebook www.facebook.com/integralbandofficial SoundCloud www.soundcloud.com/integralband YouTube www.bit.ly/youtube-integralband Bandcamp www.integralband.bandcamp.com Email info@integralband.com