– Hello, thanks for taking the time. How is everything going right now with VULTURE? What’s keeping you busy at the moment?
Mattes: Hey Tania, we’re doing fine! Currently we prepare the last bits and pieces right before the release of our debut album. Next week we’re about to shoot our first promo video and are eagerly looking forward to this. Still, there are lots of things to do and manage though.

– VULTURE is a quite young band and you are just releasing your debut full-length after the successful «Victim to the Blade» EP so, first off; could you please make some history of the band for all those who don’t know about you yet?
Mattes: We are Vulture and we play High Speed Metal. Our trademarks are lethal speed, riffs sharper than a razorblade and screams ‘n’ shrieks that will cut your throat. Vulture was formed in 2015 by S. Genozider, L. Steeler, A. Axetinctor and my humble self. Last year we released our first EP entitled ‘Victim To The Blade’ which got quite good responses from all over the globe and gave us the opportunity to play some cool shows across Europe. On August 25th our first full length album ‘The Guillotine’ is finally about to be unleashed.

– Your debut album, «The Guillotine» is coming out again with High Roller Records, a really good label for underground bands I think. How did you hook up with them? Are you pleased with your cooperation thus far?
Mattes: Yes, definitely! High Roller Records stand for high standards regarding Heavy and Speed Metal and overall we’re really satisfied with every aspect of our collaboration. When we were about to release ‘Victim To The Blade’ and were searching for suitable label, HRR were our first choice and by no means anything has changed in that matter.

– As expected «The Guillotine» is a Speed/Thrash straight-forward onslaught. As you are hailing from Germany anyone would expect a more Teutonic kind of style, but you rather seem to draw more from Canadian Speed Metal, especially on this opus, since «Victim to the Blade» had more of a Bay Area feeling.
Mattes: There are tons of bands playing Teutonic Thrash inspired Metal in Germany. It was our aim not to jump on this bandwagon and instead to deliver the goods, that we are starving for ourselves. In that matter Thrash and Speed Metal bands probably make up only about 50% of our influences. The other half consists of proto metal and NWOBHM bands with a focus on Judas Priest.

– Anyway you seem to have broaden a little bit your sound, for instance you dig deeper into those synth intros with a strong 80’s vibe. Why did you decide to explore this a little further?
Mattes: With ‘Delivered To Die’ we already took our first steps in that direction and we wanted to follow this path on ‘The Guillotine’. As all of us are big fans of 70s/80s Horror movies and their soundtracks, it just felt right to commence the one or the other song with these atmospheric synth intros to set the listener in the right mood. In general I’d say, right from the beginning of Vulture it has been our approach to put emphasis on a dark and menacing vibe. 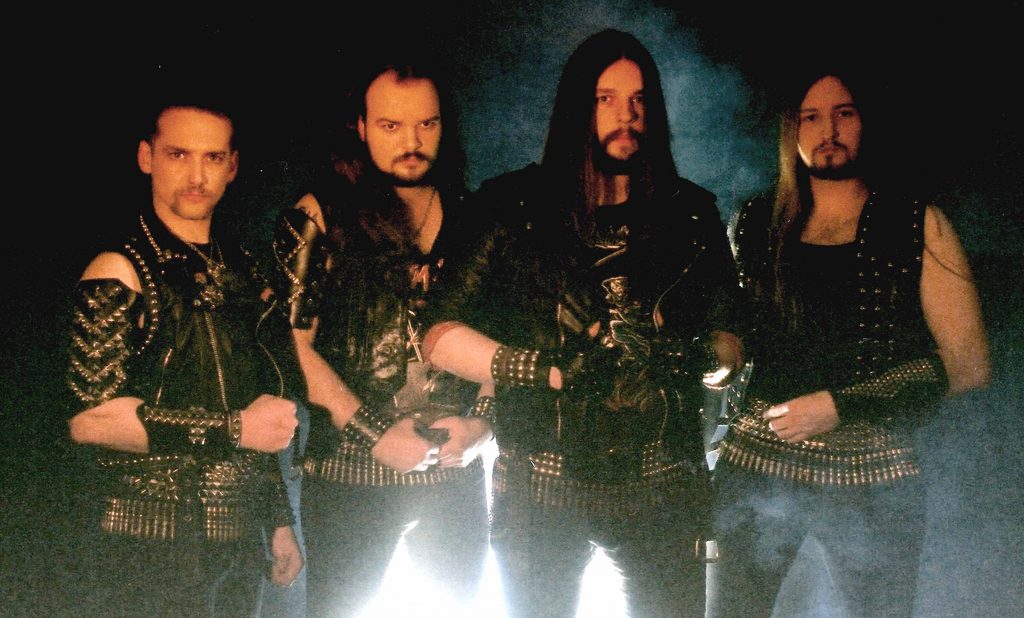 – In fact, have you broaden to more influences? As I think I can find SABBATH inspired things on the album, rockier parts, certain NWOBHM or some kind of KING DIAMOND/MERYCUL FATE kind of darker atmosphere.
Mattes: The bands and styles you named also had an impact on us when we were working on our previous release. I guess the difference is that a full length album allows you to attempt certain styles. Our aim was to fill the longer runtime with more variety and thrilling ideas without losing the focus. In the end I think we did a quite good job on that.

– Songwriting has improved a lot since your EP came out, with what feel like more thought out compositions, resulting in a more personal and varied album. How has the songwriting process been this time around? Or is it just that with more songs you just were able to elaborate a little bit more your material?
Mattes: Thank you for the warm words. The songwriting process did not effectively differ from the one on our previous release. Since we live in different cities across Germany, we don’t spend a lot of time in our rehearsal space; the main part of the songwriting happens online. First, we collect riffs and vague ideas and try to put them together or overthrow them immediately. During heaps and sometimes heated discussions over a longer period we refine the song ideas and add solos, lyrics and vocal lines.

– Having Olof Wikstrand as guest vocalist on one of the songs I think adds to this diversity. Why did you decide to have him and what could you say he brought with his cooperation?
Mattes: We met Olof during our stay in London, when we played at Live Evil Festival, and stayed in touch afterwards. He’s been a helping hand ever since then. Olof did one hell of a job on ‘Adrian’s Cradle’! His clearer voice marks a good contrast to Steelers rather rough vocals.

– If I’m not mistaken you guys live in different cities across Germany so did this had any kind effect on the process behind the album?
Mattes: It makes things more complicated I guess, haha! As I said before, it has a huge effect on the whole songwriting process and other organizational stuff. Our first rehearsal in which we played new songs was right after the recordings for ‘The Guillotine’ for example. To practice on a regular schedule is a luxury we simply cannot afford, which is the reason why every individual is in charge to be very well prepared.

– In fact I think the closing song, «Cry for Death», is a summary of all elements we can find on the album. What could you tell us about this song? Is this the reason why you thought it could be a good way to end the album?
Mattes: Yes, indeed. We felt like ‘Cry For Death’ deals with all the elements that make ‘The Guillotine’ outstanding for us. It varies from slower parts to remarkable melodies over ultra-violent riffs to classical 70s proto-Metal and brings the album in a great crescendo to a conclusion.

– Anyway I guess a debut album might be kind like a self-knowing process so, could you say you are now closer to your actual sound?
Mattes: Probably, yes. We found out that our sound has to be unpredictable, surprising and full of contrasts, which is a thin line to walk on. Complex structures, technical riffs, atmospheric arrangements and simple catchy tunes have to balance each other to make a song interesting and clutching.

– The sound is also great, feels really organic and natural yet clear without being modern or overproduced. You worked with Marco Brinkmann again. I guess working with someone who already knows what kind of sound you need makes things easier?
Mattes: ‘Easy’ is definitely not the right word to describe the album production this time, haha. The original idea was to record the album in about a week short after New Year’s. What fools we were to think everything would go smoothly. We had to come back like three times to Hellforge studios to record the last bits and pieces and went to hell and back with the mix. Marco has the same high standards that we have ourselves, which makes the work tenacious and exhausting but also very productive. In the end I’m confident, everything payed off and the final sound speaks for itself.

– With your music you manage bring the listener straight back to the 80’s, with that primitive Thrash Metal with fierce speed and sometimes really dark songs, with a threatening feeling. What do you think did the 80’s have that lacks into the nowadays scene?
Mattes: There are still quite a few bands who know how to play dark and refreshing Heavy Metal, for example Antichrist, Ranger and Nifelheim, just to name a few. But in general lots of bands confuse the issue and ruin their sound with a compressed and bombast production instead of focusing on a haunting atmosphere.

– In fact this album contains just 8 songs. It’s short and straight to the point, like albums used to be back in the 80’s, and also a perfect length for vinyl I’d say. Could you say this has helped make the album feel more intense?
Mattes: Actually we recorded a Deep Purple cover of ‘Stormbringer’ as a ninth song for the record, but had troubles to press it on wax. The album would simply have gotten too long for a 12’’ LP. In order to avoid a double LP or any other compromise, we decided to put the song on the B-side of the ‘Vendetta’ single. Anyway, a runtime of 38 minutes seems just perfect. It leaves no time for fillers, yet gives every song the chance to develop itself to the maximum.

– Anyway I think atmosphere helps in enhancing this intensity feeling. Atmosphere is something a lot of bands into the genre have seem to have forgot about. What effect could you say the overall evil and dark atmosphere has on “The Guillotine”?
Mattes: I agree with your point. Atmosphere is a very important element that makes an album outstanding compared to others. It was our approach to create a dark ambience not only with our music but also with the whole visual aspects concerning the release, including band photos, inlay and cover artwork.

– On the other hand, your cover artworks have always been great, and with a really old school look. You have worked again with the same artist, Velio Josto, and this time you have got a cover that could have perfectly been a cover for an old horror movie. Who came up with the idea?
Mattes: The idea came up right at the beginning of the songwriting process. ‘Triumph of the Guillotine’ was the first song we finished short after the release of ‘Victim To The Blade’ and we felt like it was the right title for the then upcoming album. With the cover artwork we wanted to attach right at the album title. Since Velio Josto is also responsible for the artwork of ‘Victim To The Blade’, two of our shirt designs and an extra logo, we knew already who to deal with. And once again he proofed that he is the only one to visualize our ideas.

– In fact you have some horror themes in the lyrics on the album. Would you mind to elaborate a little bit on this and how these themes fit with the cover artwork? It seems like you have also expanded a little bit on your topics.
Mattes: On the new album we still sing about murder, our music itself and horror themes. Old Horror movies had a deep impact on our lyrics. ‘This Night Belongs To The Dead’ for example deals with John Carpenter’s ‘The Fog’, whereas ‘Adrian’s Cradle’ tells the story of ‘Rosemary’s Baby’. Nevertheless, our lyrics are just a medium to describe our music: thrilling, sharp, fast and lethal.

– And all this about «The Guillotine» being said; how could you describe it in just 3 words?
Mattes: High Speed Metal!

– And finally, what are now your near-future plans?
Mattes: We’ll play a couple of shows at the end of summer and hope to spread ‘The Guillotine’ as wide as possible. Personally I’m really looking forward to share the stage with Exciter, Satan and our brothers in arms Iron Curtain at Storm Crusher Festival.

– That’s all, thank you once more for answering our questions. If you want to add some final words; feel free to do it.
Mattes: Thank you Tania for the interesting questions and the nice chat.