1-Hello, thanks for answering to our questions. What are you guys currently up to?
Mantus- We’re up to quite a bit, actually! The big thing is just trying to get the word out regarding our first album, “…On the Precipice of the Ancient Abyss.” The internet and social media has been particularly instrumental in the success we’ve had so far, and we’ve gained a substantial following for how unknown we are. We are also very excited to announce that we have begun the writing process for our next album. I’ve always been a huge fan of albums that tell a story from beginning to end and not just an amalgamation of songs, so we’ve decided to attempt an entire trilogy of albums. The first album in this trilogy is going to be called The Bonds of Servitude, and we’re sincerely hoping to have it completed by March of next year. We’re going to be incorporating atmospheric tones into it, but I think the basic idea behind it will still be reminiscent of our first album.

2- First off, could you make some history of the band?
Mantus- This project has undergone a multitude of changes, but initially the group was myself and a friend of mine that played drums in 2008. I had been in a number of bands, primarily death metal, throughout my teen years, but the music didn’t really speak to me in the same way that black metal did. After my band, Grim Blessing, split up, I kind of decided that I wanted to go a lot more minimalist with the people I worked with and with what kind of music I wanted to do. Thus, Unholy Baptism was born. We wrote a five song, self-titled EP amongst the two of us, but we really wanted to have a full live setup, so Moloch agreed to contribute guitar to the project, since I’m primarily a bassist. That album was recorded over the course of about two weeks and then we started playing live locally throughout 2010. Due to a variety of circumstances, the project was put on hold from 2010 until the beginning of 2013. Once that hit, Moloch and I got back together and decided to start working on the project again, with the intent of managing it as a studio project. We did quite a bit of practicing in Moloch’s garage during this time and got a lot of great work done. Unfortunately, I’m a bit neurotic when it comes to musical endeavors and arrangements, and we went through a number of rewrites. I actually ended up rewriting the lyrics for almost every song on multiple occasions. We started production of …On the Precipice of the Ancient Abyss late in 2015. Studio space is extremely limited where we live, so it was a bit of a struggle finding a place where we could do the recording. Through a number of rewrites and a pretty steep learning curve, we have finally nailed the sound and aesthetic that we were looking for.

3- How could you describe your sound?
Moloch- Our sound began as a direct descendant of the early 2nd Wave of Black Metal; very harsh guitars, simplistic riffs, and straight-forward, aggressively blasphemous lyrics. However, over time we have evolved to incorporate more nuanced, ambient, and harmonizing elements into our songs while still paying tribute to those who originated the genre. We take a holistic approach to songwriting that is focused on achieving an atmosphere of darkness, despair, mystery, and the triumph of evil.

4- What are the band’s main musical influences?
Mantus – I listen to so much black metal! It truly is the only type of music I listen to, because nothing else out there really speaks to me in the same way. Darkthrone and Mayhem are both huge influences to me. These bands are really so representative of the black metal musical style and aesthetic, it’s hard to be in a black metal band and not be influenced by what they did in some way. I’ve also been pretty influenced by the Swedish scene as well. Marduk, in particular, has always been one of my favorite bands and I think they are pioneers in their own right; Dark Endless is one of my top ten favorite albums of all time. I also have been getting into atmospheric and depressive black metal lately. I think that I’m just drawn to music that has a raw feel to it. DSBM is, to me, that perfect cross between doom and black metal; it invokes that raw emotion and anguish, but can also be suffocating as well.
Moloch – We can trace our roots all the way back to 1st wave bands such as Hellhammer and Bathory, but our primary influence is a blend of 2nd wave bands like Darkthrone and Mayhem, and longstanding acts that are relevant today like Marduk and Inquisition.

5- How has the feedback for your new album been?
Mantus – The easy answer is that we have received mostly positive feedback! The fact is, we’re just getting off the ground as a band, even though we’ve been doing things on and off as a band for almost a decade. I was thoroughly shocked how many plays and downloads that we have gotten through our Bandcamp page, and I like to think that people are listening to it. Our Facebook page and our website have gotten quite a bit of traffic, but if people have something negative to say, they’re mostly keeping it to themselves! We had someone just recently tell us that they thoroughly enjoy the album, and it’s feedback like that that makes us so appreciative of the fans that we have. Obviously, everyone’s tastes are different, and I certainly don’t expect everyone to like it. I’ve always said that if one person is personally affected or changed in some way by my music, then I consider that worth the effort ten-fold.
Moloch – It is still early days, but the beauty of the internet is the very immediate and widespread reach that can be achieved. We have had a surprisingly warm reception from people all over the world, and we are hoping to grow our audience even more with institutional notice such as this. 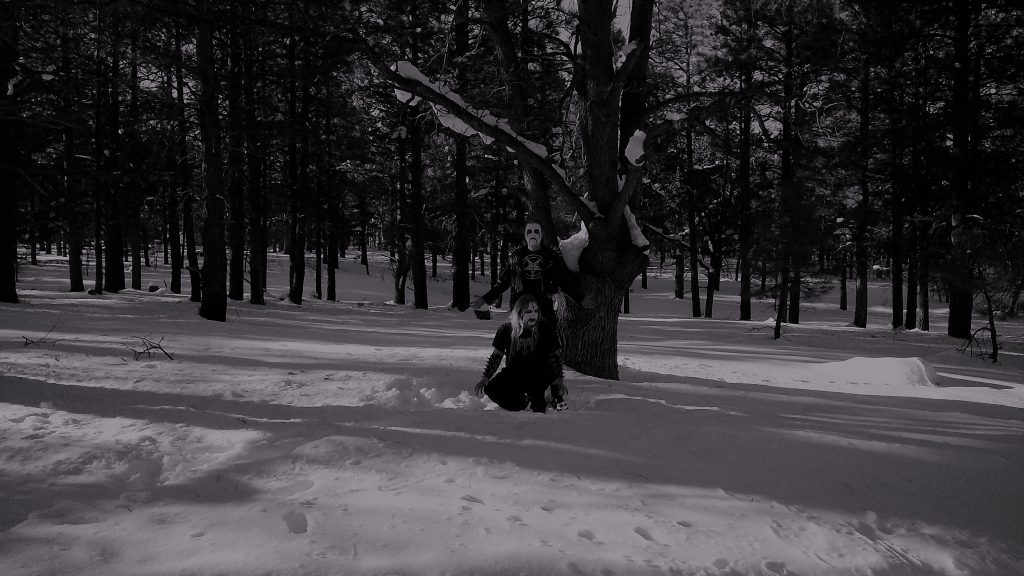 Mantus – As far as reception goes, I think we still have a long way to go to really get our name out there and create something sustainable. We also have a huge uphill climb because we don’t play currently play live. We definitely want to send out a huge thanks to all of the people who have checked us out so far. Aside from reception, I think we definitely accomplished what we set out to do. We really had this idea of creating a raw, unadulterated black metal sound, and I’m very pleased with the recording. As I mentioned, this album was really our homage to the pioneers of the genre, and I am very pleased with how well we created that.
Moloch – The most important thing to us about making this album was whether it was something we would want to listen to ourselves. Not just for a week after mastering, but for years to come. You can never reach perfection, but we are very proud of the final outcome and will be listening to this album as old men.

7- How could you describe this opus in just 3 words?
Mantus – Raw, aggressive, Satanic.

8- How was the production process for your new release?
Mantus – The production process was actually great for us! I don’t know if a lot of our fans or others know this, but we actually produced the whole thing ourselves, from inception to final mastering. I had been dabbling in it for a long time, but once Moloch and I got back together to work on this, we made the decision to learn how to produce it ourselves. I managed to snag a pretty inexpensive copy of Pro Tools and a recording interface and once we got the studio space, we started learning it. I think it goes without saying that things didn’t always go smoothly! I had to learn every piece of it, and I’m positive there is still thousands of things I don’t know about recording, but I do think we got a very good collection of songs out of our first attempt. It should also be mentioned that it was immensely helpful to go at the pace we wanted to go. If something didn’t sound the way we wanted it to, we didn’t have to worry about how much money we were paying an hour or how another person was affected by us; we would just fix it or come back to it another time. Overall, the production was a huge learning opportunity, not only because we can now be capable of recording our own music, but if we do ever have an opportunity to work with an audio engineer, we know how things flow and can adjust to different situations.

9- And how does the songwriting process work?
Mantus – Well, we are trying some new techniques and changing things up a bit right now, but typically lyrics come first. I mostly write the lyrics, so I usually come up with a lyrical concept, and we try to reflect our sound to that lyrical concept. For instance, if the song calls for something really aggressive, then we will write something that really gives that hammering feel to it. Or if it’s something melancholy, we might slow things down or add harmonizing parts. It’s a bit unorthodox, but it seems to work for us. I also have no qualms with rewriting lyrics or guitar parts to really fit the feel of the song. Black metal, I think, really needs to have a transcendental feel, due to all of the occult and Anti-Christian themes, but still maintain that cold aggression. I know a lot of musicians say this, but we really do try to let the song write itself. Sometimes it comes right away, and sometimes you’re bashing your head against a wall waitimg for it.
Moloch – We will come up with working song titles, and occasionally full lyrics, before writing the music itself. Once we have an idea for the theme of a song, the two of us will work through the guitar parts riff by riff, and then add in the bass and drums afterward to complement the song. We like to revisit songs after the rough drafts have been written in order to make tweaks and slowly perfect the sound and meaning they convey.

10 – Finally, what are you near-future plans?
Mantus – Really, a lot of our focus has been getting started on the next album. We’re definitely trying to balance all of the marketing efforts and working diligently on The Bonds of Servitude. I have the track listing mostly nailed down, and the lyrics are working themselves out. With all we learned during the recording process, we think this next album will take much less time than …On the Precipice of the Ancient Abyss. Hoping to get some label attention as well!

11- That’s all from our side, thanks again for taking your time to answer our questions. If you now want to add some final words; feel free to do it.
Mantus – Thank you for taking the time to interview us! Keep an eye on unholybaptism.com as we try to update with news at least weekly! Also, the album is 100% free, so go download it at unholybaptism.bandcamp.com/releases! Also, follow us on Facebook (www.facebook.com/UnholyBaptism) and Twitter @UnholyBaptism! Oh, and HAIL SATAN!
Moloch – Satan Lives!