– Hi, thanks for your time. What are you currently up to? How is everything doing right now with TORTURE KILLER?

“Hey Sergio, all is well – we just wrapped the major part of the shows for Phobia here in our homeland, we still have the biggest festival, Tuska Open Air, left.”

– You have just released your new album, entitled «Phobia». What are your expectations on it? And how is its feedback being so far?

“I am fairly pleased how the album turned out, I never have expectations for our releases – we just try to push so that we ourselves would feel good about it at the end, that’s the most valuable reward there is and if we succeed we know there will be a handful of people who will like it too. No matter how many times people say they like your music, it doesn’t do anything if you don’t think you did good yourself. Like with all our releases, I think we are getting the reviews we deserve, they’ve been good. Its such a clichéd subject its hard to say anything interesting about it.

– On my opinion this album sounds like the earlier TORTURE KILLER, rawer and straight-forward with a more modern sound. Was this the result you wanted to obtain?

“I think it is a bit darker, but still very much in the realms of what weve done before. I think weve always been straightforward, this time I think we´ve added more different song structures to make it sound more fresh to ourselves, and with some songs I think we succeeded really well. The sound, well to me its more “real” and old-school instead of being modern.”

– Having released an album like the previous one,»Sewers», where the band showed was on the top of their own standards, so to speak, I think the «I Chose Death» EP showed again a superb TORTURE KILLER, and with this new album really confirm it. Is something you strive for to top over your previous album? Is there always room for improvement?

“Im glad you feel that way, and that’s how I see it too. I was very pleased with “I chose death” which did a number of things for us, and obviously when you’ve done good you don’t want the next one to be a total let-down. Yes we can always improve and that’s what were doing, as you can see, this is not our day job – it’s an outlet and a hobby, so were not in any kind of schedule to push music out just for the sake of it. Once you think you’ve done well with songs like “I chose death”, “I bathe in their blood” and “forever dead”, you want to do something that in some level are as good as those. I take no pleasure in writing un-inspired music, and im sure you don’t want to hear something like that. It’s a matter of personal taste obviously, writing is food for my soul which makes me feel good. Cant please everyone of course, but that’s the way it just is.”

– Groove is one of your trademarks I could say, and on «Phobia» we can find a really huge dose of it, but I would like to know what do you think are the musical features that describe you the best.

“yes, catchy grooves definetily is the thing were trying to achieve. We wish to create a certain mood, not just be in your face all the time. It all starts with a riff, you need a good riff or you will not have a good song – and that’s when it comes tricky because coming up with a good riff is really really hard…coming up with an album full of good riffs almost impossible. The riffs and the grooves are the reason I fell in love with some bands, so that’s were trying to do ourself aswell.”

– On this opus you’ve got a new singer, Pessi Haltsonen. How did he join the band? And what has he brought to TORTURE KILLER?

“He joined some years ago, and finally completed the line-up weve been struggling with. Really nice and down to earth kinda guy, reliable and full of power. We got 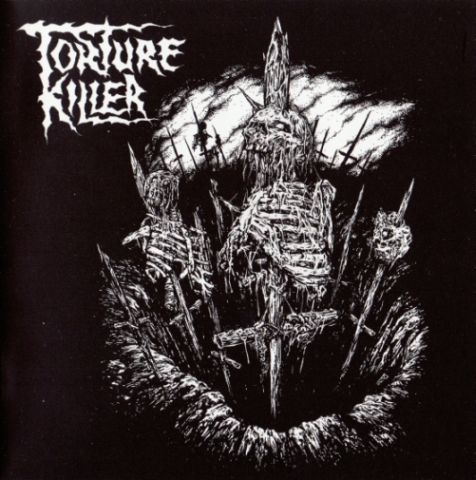 hinted from a mutual friend and lucky for us – he wanted to audition. I think his main contribution is his presence, hes the missing link which makes us a real band.”

– If I’m not mistaken, TORTURE KILLER was a name choosen because of a SIX FEET UNDER’s song, and on this new effort you’ve got Chris Barnes as guest artist. How did everything arise?

“I had a song that I had been struggling with for ages, it had a mood but I just couldn’t find the right title for it so I turned our old friend, Chris, for his help. If you do a bit of study, you can see we share a history together so it wasn’t like I just picked his name out of a phonebook randomly and asked. He´s really good of describing audio, and he was happy to help out, the song initially was going to be a full- on instrumental piece, but he came up with these really catchy lines that we ended up using. He was also kind enough to perform and split the verses with Pessi in the beginning, and I think his part is explosive, it feels really flattering he is on the album.”

– And if you had to choose 3 musicians to cooperate with you; which ones would be?

– Leaving the music on the album aside, I would like you to comment a bit on the artwork. How did you work on the process and what did you want to express with it?

– «Phobia» is one of the most expressive words on Earth so, why did you pick it as the title for your new album?

“Its short and striking and i think its one of the stand out tracks on the album. It also continues the album title format weve had with “Swarm” and “Sewers”.”

– And, what do some of the lyrics on it deal with?

“its a mix of different made up stories, some have a distant relationship with real life horror, some are just made up..i think its more psycholigal horror instead of graphic details of violence… Theres a bunch of things there that describe the situation people are in… as we are going straight to hell, and the insanity and idiocy is rubbed to our faces, theres a legion of normal people out there closing to their boiling boint…just waiting the safety to fail.”

– All this about «Phobia» being said; how could you describe it in just 3 words?

“Our plans so far end up in June with the last big festival show, Tuska open air, after that we propably take some months off and then see where to go and what to do. 3 out of 5 of us have newborn kids and that puts a natural challenge to be active. Were not done for sure, but need a breather. “

“Thanks a lot for the interview Sergio. Really glad you took the time to do this for us.”