– Hello and first of all, thanks for taking the time. How is everything going right now with THE DEATHTTRIP? What are you currently up to?
-Cheers,my pleasure.Well,these days ther`s a bit quiet since we released the debute album “Deep drone master”,as I`m up to my neck with DHG business,which needs my main priority.We`ll see what comes of “The Deathtrip” eventually when I have some spare time.

– First off, as you have recently released your debut album; could you please make some history of the band?
-That`s right It all started back in 2004 when HOST desided to pick up his guitar and make some tunes worthwile,as he thought the scene lacked quite a bit of feeling and soul back then.Then I got to hear the tracks from Khvost who was originally ment to do the vocal duty,and I imediatly felt the urge to get my head into it,and from there came the demos we released on cassette at first then  later on on vinyl and cd formate.

– This first full-length album is entitled «Deep Drone Master». What are your expectations on it? And how is its feedback being thus far?
No specific expectations,we only wanted to make some old fashion black metal music,and has been overwhelmed with enthusiasm and positive feedback from it.Seems to have capturer a lot of people wanting to hear that exact thing again,as it hasn`t been heard in quite many years I think ,at least not like the way WE do it .

– It took you 7 years, since the band got together, to release this album. What kind of activity have you had throughout all these years?
Well,artisticly I`ve been involved with some minor projects here and there.I`ve taken part in the THORNS recording for the next album,though it still need a lot of finnishing before it`s done.Then I`ve also mannaged to put together my very own band called INTROVERT,and we have recorded a full lenght ready to set sail as soon as we get a propper deal.

– And how has THE DEATHTRIP evolved since you formed the band up to the date? If you would have released the album during the early years, would it have been different to what you’ve done in «Deep Drone Master»?
It hasn`t evolved too much out of what we set out to do.The Deathtrip aint some experimental thing,it`s right on black metal in your face you know.So,we had this crystalized vision on how we wanted it and we`ve kept the ideas more or less totally intact since the start(with some minor adjustments of course)

– Starting to dwell into this opus; what do some of its lyrics deal with?
The dark side of human subconsciousnes.They are ment to portrait the demons that dwell inside the head of the listener,enabling the listener to face these demons for failure or triumph. They are a vision of the secrets of the mind,and how you perceive them yourself.They can be interpreted in numerous ways acordingly to the listeners own imagination,but basicly they are there to transmit some kind of guidance,guidance down into the darkest places of your mind.

– And how do some of the themes on the album connect with the cover artwork? What did you want to depict on it?
Well,as I said they are a guide into your subconsciousnes, and the album cover shows a creature from a  dark place welcoming you to join him into his world ,so the person pictures could be The deep drone master (lord of darkness) in embodiment welcoming you to join him on the deathtrip 😉

– The album has a strong Norwegian Black Metal flavour to it, being really straight-forward and with a strong focus on guitars. Did you have a clear idea of how you wanted the album to sound like?
Yes,we were very precise and agreed on how we wanted it,grim and cold with a naked feel to it.The whole point of the album was to reset the clock and tune into the goodies of the past.to bring alive a monster that has been asleep for a long time, and thus we both had this idea of sound in our minds.

– Some parts bring to my mind the early DARKTHRONE. Have they been an influence for THE DEATHTRIP? What could you say have been some of the most influential acts for the sound of the band?
Well,quite obviously as we wanted to bring alive old schoolish bm ,the oldies of the past has been a sentral inspiration source,you know darkthrone,Burzum,Mayhem etc.That`s a given for sure,nontheless we also wanted to add something special and fresh to the blend,and that came from our personal sources.

– It also has that overall raw and cold feeling, with the guitars themselves building this freezing atmosphere. Is this feeling something that also resonates with you on a personal level or just musical aesthetic?
I don`t want to go into details too much on that,but to answer your question I`d say music is art to me,most of all art,and so making music is like painting a picture.But in order to paint a picture with honesty and to be able to transmit emotional content ,thoughts and ideas in a firm way ,it needs to be made with the heart.If it was theater only,then I don`t think it would stand the test of credibility.

– The album was released through Svart Records, a dedicated label into the underground with really interesting bands in their catalogue. How did you hook up with them? And how are things  working so far?
We sent them a demo of the songs and they really liked it.Wanted to hear more and there you go 😉 Things are working out great with 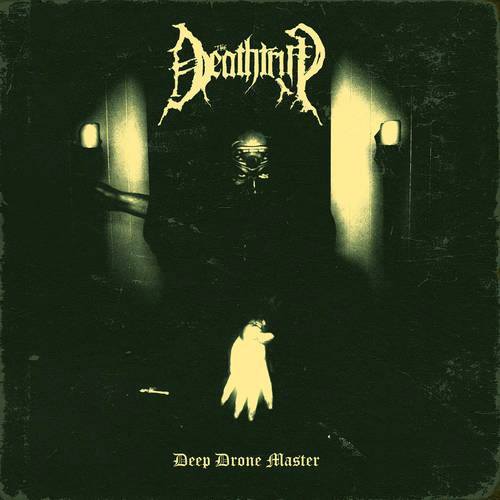 them.SVART seems to be a serious label,with less fuss and a lot of credibility in their choices of bands.They seem to take a liking in the bands they sign,and thus they stand out as a label with some kind of substance.They aren`t  there only for the big bucks.

– On the other hand, veteran Snorre mixed the album, and I think he brought back the texture and ambience of the early 90’s, with a lot of feeling. Was that the kind of sound you were looking for? Why did you decide to work with him?
I played him the songs back on some >THORNS recording session,in one of our breaks,and he really liked it,and so I asked him if he would be interested in the mixing job,and he was pleased to say yes.

– All this about «Deep Drone Master» being said; how could you describe it in just 3 words?
I can`t.

– And finally, what are your near-future plans?
As far as The Deathtrip goes I can`t tell.These days I`m all caught up with DHG,and so The Deathtrip would have to wait a while,and then we`ll see,perhaps we`ll make another album if we feel like it,and if not then this will be the only thing you`ll hear from us.

– That’s all, thank you once more for answering our questions. If you want to add some final words; feel free to do it.
Thanks,it was my pleasure.