– Hello and first, of all, thank you for ansewring to our questions. How is everything going right now after the release of your newest album?
It’s exiciting. Specially because this album is getting possibly the best reviews of my career. Very humbling. And great for my son and «his» future. He is a big talent… And I never knew it.

– This new album is entitled «No Control». You have always been an artist that hasn’t compromise, that has remained true to themself. Is the album’s title a statement?
It’s because for the first time I trusted myself, with my son and Mike, who enginereed in «his» studio» to just let it fly. Nobody had any control of anything, just me and the creativity that was happening. Tht’s why it is such an organic album. It is real songs, real lyrics, not manufactured. A real joy, and I will do it again.

– The cover artwork is also just yourself. Black leather and your bass. What did you want to express with it?
I chose this picture because it has attitude. To me it says «here I am, around the block and back again. Still standing». Just plain attitude. I love this picture.

– The great bulk of the material was written by yourself and your son, Richard. How was the experience like? I guess this also gives the album a more special meaning for you.
Yes, he wanted to write with me for a long time. Finally I guess we were both ready. He showed me a riff, I liked it and it became «Don’t do me Wrong». We went in to simply demo it, then did a couple more and all of a sudden we were making an album. A serious one. And then all of a sudden we had a record deal. It all happened very quickly. We connected big time writing, going back and forth and of course doing this with my son has been a bit of magic I was not counting on or looking for.

– One of the tracks that manage to stand out is «Strings», with a great horn arrangement. Would you mind to elaborate a little bit on its story and on how did it born?
I had this riff for quite a while. I didn’t know what to do with it. Then the «Strings» vocal line came to me. It was so weird, the way I heard it in my head kept repeating it like a broken record. Then the whole song came. I was explaining to Richard this about the «Strings» that hold us all forever, an important message in today’s world. Did not hear the horn line that Ray Beavis came up with. He really wanted to give it a try so I trust him and said «go for it». He lifted it into a completely different level. One of my top three compositions in my opinion. 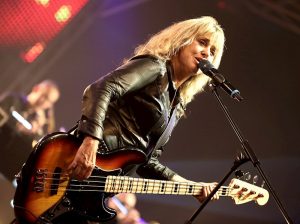 – And «Love Isn’t Fair» has an almost dual quality to it being musically cheerful but bitter lyrics. What could you tell us about this song?
Yes. Was playing the bass riff in Hamburg, fooling around. It had a vibe about it right away. Then I sang «Love isn’t Fair» and boom. There was a song. It had a MAVERICKS feel about it and I was just following the path the song was taking. What I love about this is exactly what you are saying, it is a pretty song, in a pretty frame, with a serious message. My favourite thing!!

– Overall «No Control» is an album with a lot of Blues influences I’d dare say. What things, musical and not necessarily, have inspired the record?
It was a combination of everything, Richard providing me with lots of riff ideas, things I wouldn’t normally play myself, and me creating around that. I guess in reality it is the sum total of all my musical experience for the past 55 years!!! That’s a long time.

– And all this about «No Control» being said; how could you describe it in just 3 words?
Creative, organic, honest.

– As I said earlier on the interview, you are an artist that has always remained true to themself and has lent anyone manipulate them. In fact you were the only Penthouse centrefold ever to be allowed to keep her clothes on. How important was a gesture like this for you?
Very important. My main thing was to never use my sexuality to become famous. I actually refused many times to even put make-up on. I actually prefer somebody to tell me I look nice without any make-up on, and I don’t wear much anyway. I am my own person and will not be manipulated by anyone. 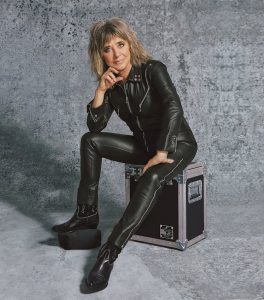 – It’s well known by know that your passion for music came basically when you first discovered Elvis when you were seven. The thing is he was a man and you are a woman. Do you think you have had to face more hindrances just because you are a woman (and playing Rock N Roll, which seems to be a bonus)?
I don’t think this way. Never did. I actually don’t do gender. I do what I want to do regardless of my sex. When I was inspired by Elvis it never occured to me that he was a man and I was a girl. Just didn’t care. I am a musician regardless of gender. Becuause I am serious about what I do and put that out there. I get treated serious. That’s the secret.

– You were basically the first woman doing your thing, you didn’t have that much women to look back at for inspiration as a bass player back then but, what artists (women and not) have inspired you musically in any way? And how do you feel about the fact that you are now, and have been for a long time an inspiration for women that want to pick up an instrument or a mic? In fact in 2013 you received the Woman of Valor Award from Musicians for Equal Opportunities for Women, in recognition of your influence on generations of women artists.
When you say I didn’t have many women to look to for inspiraton on bass you must clarify I had nobody to look to. I was the first female Rock N’ Roll musician to have worldwide success. I did not have a blueprint and had to create the niche all by myself. As far as women inspiring me, there is only two I can think of. Billie Holiday, love her phrasing and beliee or not, Dory Previn, she is a wonderful lyricst.

– I also read your dad also kind of pushed you to play bass, and that he brought up the last three girls gender-free. How do you think has affected you in your way of getting along as an artist and within the music world? Is it gender a construct?
He did bring us all up to be pretty ballsy! Seem to have taken this to heart. He told me once, a long time ago «this is a profession. You have an obligation to every single person in that audience who has paid to see you». I live by this. He didn’t push me to bass, this was a decision when we formed our all girl band and nobody else wanted to play it, so I did, and it fit me like a glove from the word go. I was already trained on percussion and piano, but the bass was my baby.

– Do you think things have changed that much into the Rock scene since then? As in Rock unfortunately gender roles seem to be quite marked.
Well, it’s not an easy job, you have to give up to a lot; lots of travel, jet lag, non stop work, promotion, being exhausted, watching your voice, watching your fitness… It goes on and on. Not a lof of women want to do this. I have done it for so long that it is second nature, but I guess it will always be mainly me doing it. That’s how it is. 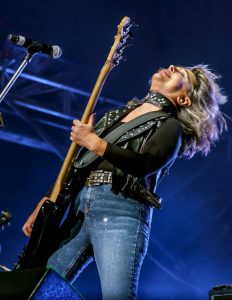 – You played in a few bands back in the USA in the mid 60’s, like THE PLEASURE SEEKERS, with your sister Patti, as well as CRADLE. How easy was to get gigs and not being discredited for a band formed only by girls back then? Do you think you had to work harder than if you had been men?
Actually because we were female, and that was unusual, we never stopped working. he boys didn’t work as much as us. The downside was we were stuck in cubs, and had to go the «show band» route, which was very valuable as a learning curve. It definitely helped form Suzi Quatro the entertained. CRADLE, where I stepped back for about 18 months and mainly played bass was valuable for me becoming very efficient of my bass guitar. All good. And finally when I went solo all this experience married up: entertained, musician, singer.
– And how did you experience the whole thing of moving to England and keep with your career there? How was your life when you arrived to the UK?
Well, I had my contract and a small advance, and that was it. It was extremely lonely and a little scary, but I was absolutely determined to make it. And you need that determination all the time. Family-wise I was heartbroken. Listen to the song I wrote called «Lonely is the Hardest». It says it all.
– Of course the photos wearing your leather catsuit are legendary, and it was groudnbreaking back then, but it’s something that also tends to have sexual connotations even though you manage to just give it your own twist and make it your own look. Were you aware back then this shooting took place?
I did not know the jumpsuit would be sexy. I simply thought it was a sensible idea, nothing to launder, nothing to tuck in. Everything stayed put as I was running around the stage. I never «tried» to be sexy. Sexiness comes from within. It was a lucky break that it/I was sexy.
– In fact that’s a style you have somehow kept throughout your whole career. How important is for you aesthetic/visuals in Rock music?
Entertainment is always part visual, and should be comfortable for you and pleasing to the eye. I have always stuck to «me», and that is why I can still wear the same clothes.