– Hello and first, of all, thank you for ansewring to our questions. How is everything going right now with MARTYRDÖD being about to release your new album?
Everything is great with the band. We’re really excited for release and following up with shows up ahead.

– «Hexhammaren» will be your seventh album. Did you ever imagined you would get this far? What are the goals and aims when you first form a band like this?
We’re just going on continuously without any real end goal. We’ve always just kept moving and taking it one album at a time. Mikael always had new riffs every now and then so all of a sudden it’s time to book studio time. It’ll probably continue this way if the future allows.

– Starting to dig into this new record. What’s the meaning of its title?
The title just sounds cool. It’s a Swedish compound word made from “hex”, an old spelling of a word meaning something like witchcraft and “hammaren” wich means the hammer. It’s also the Swedish title of an old 15th century manual for witch hunting called Malleus Maleficarum. But it’s not intended to be straightly related to that.

– «Hexhammaren» is your first album with Century Media. How did the move happen? How pleased are you to be working with such a big label?
We were done with a three album deal with Southernlord and started looking around at the same time we got approached by Philipp at CM. It all happened really through good timing and smooth transitions. We later also signed back on Southernlord for North America. We’re very happy so far.

– Also, this is your first record with Daniel Ekeroth after Pontus left the band. How has Daniel fitted in? What has he brought to the new album?
He’s a great band mate. Close friend to me since before and a very talented musician. He’s brought more pure electric bass style playing to several songs on Hexhammaren.

– Anyway some things never change, like recording it at Studio Fredman. I guess it’s easier to record with someone and somewhere you know and you know you will get the result you are looking for, am I wrong? But on the other hand have you ever considered trying something else for some «fresh air»?
No you’re not wrong. We’ve been tempted to look around but in the end we’ve decided to go back every time.

– «Hexhammaren» is your second album which also features songs in English. Was there any particular reason for this?
The reason is Mikael wrote English lyrics. Simple as that, no special reason.

– I could say this is your most Metal record to date. Was this how you envisioned the album or does everything just happen on a more natural way? How do you approach the sonwriting?
I agree but at the same time there’re some songs that are more punk and hard core than anything we’ve made for the last 10 years. Riffs and basic arrangements are made by Mikael and then we practice the songs and set the final version together.

– Again guitars bring a lot of melody with an Scnadinavian flavour, somehow in that «Gothenburg style». How do you manage to get a good equilibrium between melody and your usual rage and outbursts of energy? Though this album has a specially dark atmosphere too. What did inspire this or what are you channeling through this grimness?
It’s all just happening within Mikael when he comes up with the riffs and melodies. I’m always encouraging him when he presents ideas on licks. Usually it’s a very natural process where we’re all open for the stuff coming out through Mikaels own internal filter.

– It’s also really heavy, seems to have almost Sludge elements. Have you broaden to new influences?
Not really. I think we’re just open minded enough to allow for any idea to realized. We always had pretty broad influence base among the band members.

– In fact your music has a somehow transofrmative aesthetic which seems to be linked to the mood of your lyrics. How strong should be or is the bound in between both elements of your music?
The lyrics often come after the music. It’s kind of a forced subtitle to the feelings and emotions within the music of the songs. 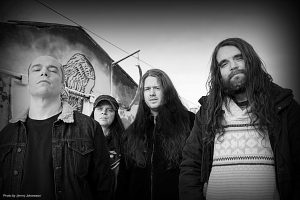 – This being said, what’s the message behind «Hexhammaren?
For the entire album? There’s no special message. It’s just output collected over several years. We encourage people to seek their own take on it and and interpret the album any way it’ll suite them.

– All this about «Hexhammaren» being said; how could you describe it in just 3 words?
Best so far.

– Sweden has always had a strong D-Beat/Crust tradition. What did rise your interest in the first place?
At the turn of the millennium our gang of friends were really into d-beat and käng. We wanted to have our own band playing raw punk with d-beat. Simple minds really

– How has evolved this scene or styles through the years? Could you say it has somehow lost its political/social element in some cases?
I don’t know to be honest. I’m not following and or listening to crust that much personally. I would say some bands are still political and engaged and some probably weren’t that active even back when they started even if they were hanging around in the political diy scene. Lot’s of punks only want to thrash around in general rebellion and have a good time forming their own independence not super concerned with actual societal revolution.

– In fact «Paranoia» was an album with a clear anti bigotry message. Do you think something in the current European situation has changed since that album was released? It unfortunately seems it has change, for the worse.
Yes. I think it’s much worse and going to be even worse again before people turn it around. It’s all moving in cycles and hopefully things will be better in the future. I’m afraid the bottom hasn’t been reached yet though.

– And finally, what are now your near-future plans?
We’re gonna play live when we can and then start working on new songs.

– That’s all, thank you once more for answering our questions. If you want to add some final words; feel free to do it.
Thank you!!