– Hello, lots of thanks for answering our interview. How is everything going into the VREID’s camp right now?

All is good I guess. we just finished up a great European tour, and are now having some time off back home.

– Though you have always shown evolution for you is a constant process and you have always raised your own standards, after hearing «V» it seemed like it was going to be really harder to top over it with the upcoming record, but with «Welcome, Farewell» you’ve managed to do it, once more. What’s the secret recipe for this?

No recipe. We just do what we want to do, and try and create the art that we like.

– And how is the feedback for this new opus going? For the reviews I’ve seen it seems like people is really happy with the final outcome, are you so as well?

Absolutley, in my humble opinion this is the best Vreid album so far. I am utterly pleased with music, lyrics and artwork.

– First off; why did you decide to name the album «Welcome, Farewell»? What meaning does it hold?

I leave that up to the listeners to make their opinion. For me this album is very much about the circle of life.

– The first single off this new effort is «Way of Serpent». Considering the diversity on the album, was it easy to choose a single? And why did you pick that song?

First single was The Reap. Second single was Way of the serpent. I think that they are quite different songs, and that was the intention of choosing these 2.

– On songs like «Black Waves» the bass plays a really important role, in fact on this effort bass is more audible than on previous albums. Was this something you were looking for? Moreover I think it fits perfectly the whole vibe and sound on the album.

Yes it was. The bass guitar has always been cemtral in Vreid, and I always want it to have some “air” in the production. For me its important that the bass does a bass role, and not just follows the guitar.

– If you don’t mind I would like you to tell us a bit about the last song on the CD, «At the Brook», which I think describes quite good what this album is all about.

It’s a praising of the nature, and the powers it hold. Nature is my sanctuary were I find peace and inspiration.

– On this tune there’s still present that METALLICA vibe «V» also had, but in general this new «Welcome, Farewell» is way rockier, it also has some Blues, Jazz. In fact I would dare say this is your most diverse album so far. What are your thoguhts on this? How important is versatility for VREID?

My music taste is diverse, and as the music is created by me I guess that its natural that the music becomes diverse. I don’t work within any frames or dogmas.

– I could say «Ath the Brook» is a really old-school sounding song, but that’s the overall feeling on the album, as it has a 70’s-like production, with a certain live feeling. I think it has a really organic sound. Due to this could you please tell us how was the production process and if it was this the sound you wantd to get out of it?

We tried to keep things as natural as possible. Not much editing or effects. I wanted to capture the sound of the drums and amps without colouring itto much in the mix. We worked quite a lot when we set up the sound, and not much time on the recoding itself. Therfore I think it sound fresh and alive.

– All songs on «Welcome, Farewell» are different to each other, but all of them keeping the VREID’s essence. Is easy to be diverse still being faithful to yourself and being recognizable? Without going too far away from your roots? 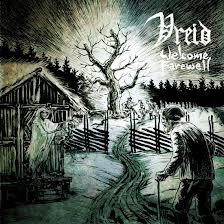 I never think about it this way. Each song has its own life, and I would never “censor” a song because it would not fit in. If I am satisfied with the song I use it, if not then I don’t.

– The cover artwork is quite singular, and also different to the covers for the rest of your albums, it also has a simple sketchy style that could also fit the musical content on the album. Would you mind to elaborate a bit on it? The artist, what did you want to express with it, etc.

The artwork is done by Kim Holm. I send him some ideas, and he did a fantastic work. I send him a lot of photos that I had done while hiking in the nature, and I wanted these pictures to become the central artwork for the album. I wrote a lot of the music & lyrics on my hiking trip, and I see music, lyrics and artwork as part of one big wholeness.

Some weeks off, and then we head for a North America tour in June. That is something that I really look forward to, as we have always gotten a great reception over there in the wild west.