– Hello and first, of all, thank you for ansewring to our questions. How has everything been lately into the VOJD’s camp? How are you feeling after the release of your new album?
It feels great that the album is finally out. It took a year from start to finish to get it out.

– You had problems with the Black Trip name due to a Mexican band with the same name, but it was just at the same time you had the major line-up change so is this actually a new chapter? Do you see VOJD as a new band or just as BLACK TRIP with a different moniker?  And maybe you decided to spell it with the J to make sure it’s a unique name?
We feel it is a new chapter in a way, but we also see The outer ocean as the third album as well. It still me and Joseph who wrote the most part of the music on this album, as on the two black trip albums. But we have progressed and turned a bit more to classic hard rock rather then heavy metal. I came up with the new band name. It ain’t easy to find an original name that isn’t all ready taken. I thought the spelling with a J gave it a Scandinavian touch, and yes. We wanted it to be unique so that it wouldn’t happen again that we would be sued again. 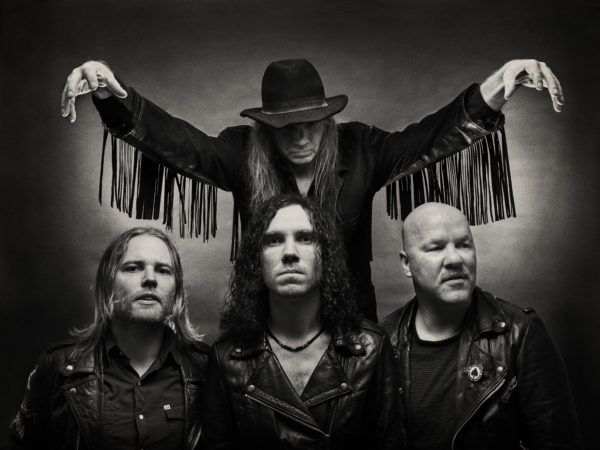 – You’re the same but I guess to some extent you also need to make a name again, would you agree?
Yes of course. We have to work again to establish the new name. But on the other hand, almost every interview and reviewe we’ve got they mentioned the new album as our third release which is great.

– To me «The Outer Ocean» is the third album by BLACK TRIP, since it feels like a natural evolution. How do you regard at it? Toward what directions has the band evolved? Since you seem to be heading toward a more and more personal sound with each new record. In fact it sounds more rockier and less Metal than your previous releases.
I agree. It’s a natural progression from Shadowline. I personally have evolved a lot when it comes to writing songs. Also my influences as a guitar player have opened my eyes to more rock oriented music I guess.

– You have also tried out new things, take the piano on «Dream Machine», as well as the harmonica break. How did you come up with new elements like this? And how could you bring «Dream Machine» to a live scenario?
It definitely feels like we are more open to new ideas as a band now. Not that trapped in a metal corner. It’s always cool to hear a song come to life when you put on new elements. Joseph wrote Dream machine. It’s an excellent song. One of my favorites on the album. We haven’t tried it out live yet. But I think we will in the future. It’s our former drummer Jonas who plays piano on this song.

– Something else that also caught my attention is what I find some quite ZZ TOP sounding guitars throughout the album. Have they been a special influence to this record or its guitar sound? Have you broaden to new influences during these last years?
Thank you for hearing that. I’ve been really influenced by Billy Gibbons guitar sound on this recording. ZZ Top is one of my favorite bands. But it wasn’t any intention to make it sound like ZZ Top. But a lot of the things you are influenced by works it’s way in unconsciously.

– Your sound has always been really natural yet fresh, you don’t sound like another retro band still being grounded in 70s and 80’s Metal/Rock. How did you work on the production process this time around and who took such duties? This time production sounds bigger.  I read you recorded «The Outher Ocean» during almost a year. What kind of effect did this have on the way you worked or the final result?
This time we did everything ourselves. We recorded it in our drummer Bentans basement where he has a 24 channel studio. We did it on weekends and the evenings when we had time. So we spread it out over a longer time. And when Johan and Sebastian left the band in the middle of the recording we deleted all the guitars and started from scratch again to get a clean start. And it was Linus our new guitar player who mixed the whole album in his studio. It sounds more expensive then ever. Not all that dry 70’s sounding.

– Listening to the album the basis hasn’t changed, so I guess both you and Joseph still remain as the main songwriters? But what did Linus and Bentan brought? Moreover they also mixed and recorded the album. How positive is to have an actual member of the band being in charge of this?
Both Bentan and Linus brought a lot ideas to the table. Both according to the production and for the songwriting. It couldn’t have been done without them. This time it felt great to keep it in the family. Only time will tell what we will do for the next album.

– Up to your sophomore album everything happened quite fast, but this time around it took you some more time to release your new opus, as well as the «Behind the Frame» 7». Was it something conscious or the issues with the name and new line-up had something to do?
It was because of all the factors as the new lineup and also it took a while to get the record deal we were happy with. 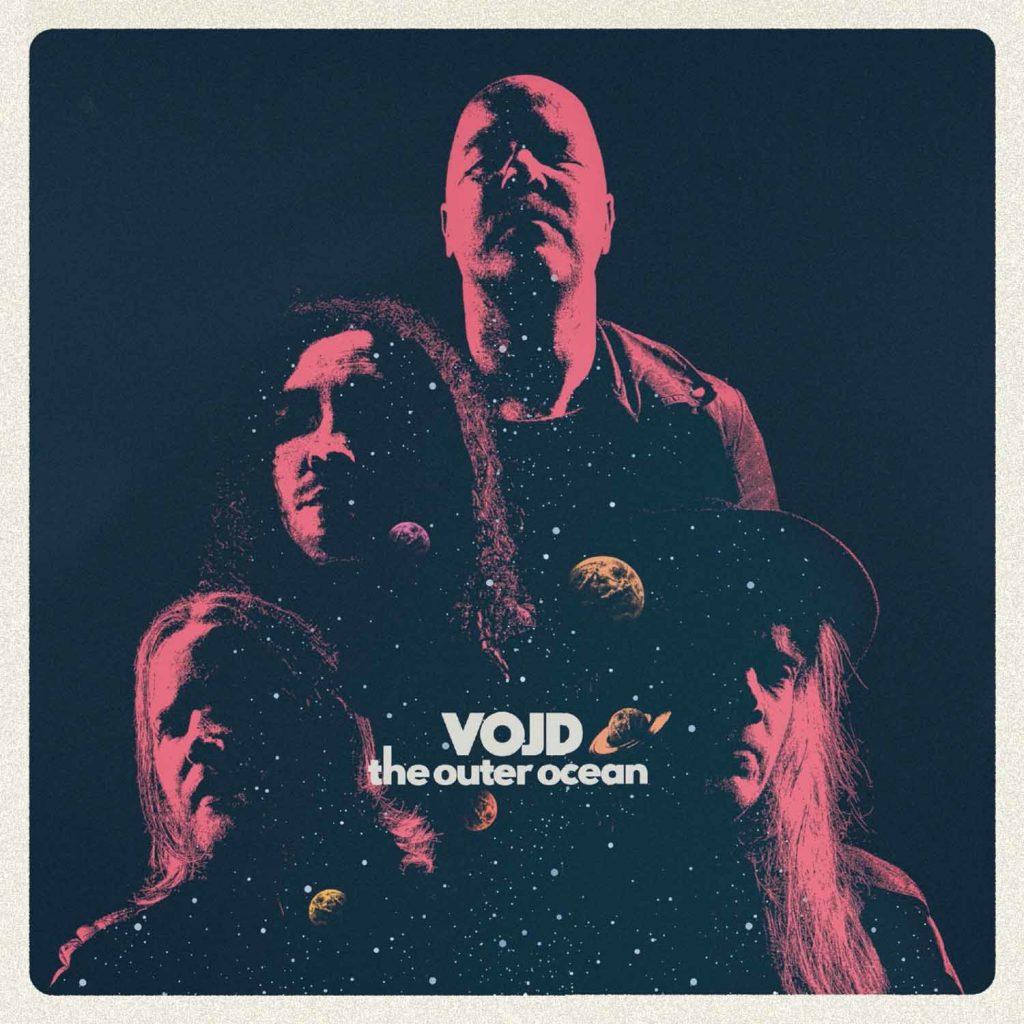 – Also this is your first album with High Roller Records, how did this cooperation arise and how happy are you about working with them? It seems like a really fitting label for a band like you.
High roller was the label that suited us the best at the time. They believed in us, and they gave us full freedom to do what we want. We signed for one album. Which was the best option for us.

– «The Outher Ocean» has somehow cosmic connotations, something that suits your cover. Is the album title only linked to the album cover? It’s hard to depict from the lyrics as most of them feel to be quite metaphoric.
The cosmic theme fitted the new band name really well. The lyrics has inspiration from various things. But the title track and the name Vojd made us go for the artwork that we did this time. It’s Affe from Obnoxious youth who did the artwork. We’re so pleased with the result. We’re definitely going to work with him again in the future.

– In fact I have always been a huge fan of bands that actually care about the image. Is image something important for you? As by just taking a look at your cover artwork anyone could have a clue on what we’re going to find on the album. Was this your idea? And how did you work on the whole art?
Image is really important. It’s a positive thing that you can get an idea how the album sounds by only looking on the album cover. We had an idea for the concept, but Affe came up with the way to execute it. He was influenced by early Stooges for some details, which I love.

– All this about “The Outer Ocean» being said; how could you describe it in just 3 words? Aside from the three words on its title of course.
Classic heavy rock. 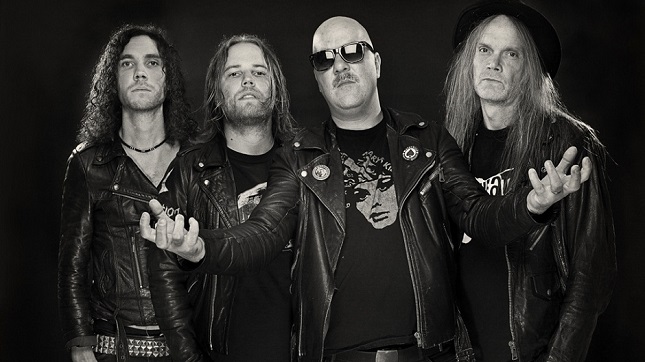 – You have already played some gigs in Sweden besides the releasy party. How is your crowd reacting to your new songs? And do you plan to play some other dates around Europe?
The new songs works really well in the live set. They blend in well with the older Black trip songs. It makes the set dynamic. We’re working with a booking agent in Germany right now to get a tour going this autumn. We’re so looking forward to delivering rock to Europe again.

– That’s all, thank you once more for answering our questions. If you want to add some final words; feel free to do it.
Thanx a lot for the interview. If anyone out there are interested in booking us contact us on our Facebook. And we’ can’t wait to go on tour.