– Hello, thanksfor taking the time. How is everything going right now with VANDALLUS? What’s keeping you busy at the moment?
I’m Doing fantanstic Tania. Just getting ready for the release of the record.  This anticipation is like waiting for a new naked gun movie to be released. its great! Loud music and stupid movies keep me busy all the time.

– VANDALLUS is a new band that has just released its debut album so, first off; could you please make some history of the band?
Well, being that I am writing you before the album is released, I should say that we «WILL» be releasing our debut album. As far as the band history goes, the band came about with the idea of putting together a set of hard rock songs that come from an era where people smoked cigarettes in movie theaters. We really don’t have much history at the moment, but we intend to make some kind of history in the next couple months. Hopefully its all good stuff. In a nutshell, Jamie Walters and my brother Jason Vanek wrote some songs and we basically got in one room and worked it together and recorded a full album. Its was pretty simple actually.

– And how did you come up with the band’s name? What does it stand for?
When your a kid you like to do stupid shit. like vandalizing stuff, blowing things up, smoking dope and all that kind of fun shinanagins, so we basically took the word «Vandalize» and changed it around a bit to come up with Vandallus. The songs are written about being a rebellous teenager. For the most part at least.

– Both of you are also playing in MIDNIGHT, which is a band with an increasing fame and sucess into underground Metal. Do you think being part of that band can help VANDALLUS reach more people?
I dont know. Midnight its a totally different animal. If people can get into this and also listen to Midnight, then I would say they are music lovers. Which is cool. its a different sound to me a least.  But in the end its all rock n roll though. I really dont know or think about midnight helping sell Vandallus. These songs were written with a totally different mindset. People can make that correlation or not if they want. But I dont

– In fact Jamie Walters also wrote a few songs for VANDALLUS, which songs did he write?
Yea, he wrote Break the storm, On the high side, Get out and Running lost. The dude is a very efficient song writer and a very good one.

– Being both bands so different; what does VANDALLUS provide you MIDNIGHT can’t and viceversa?
Midnight provides more cocaine and speed where I would say Vandallus would provide more weed and Miller 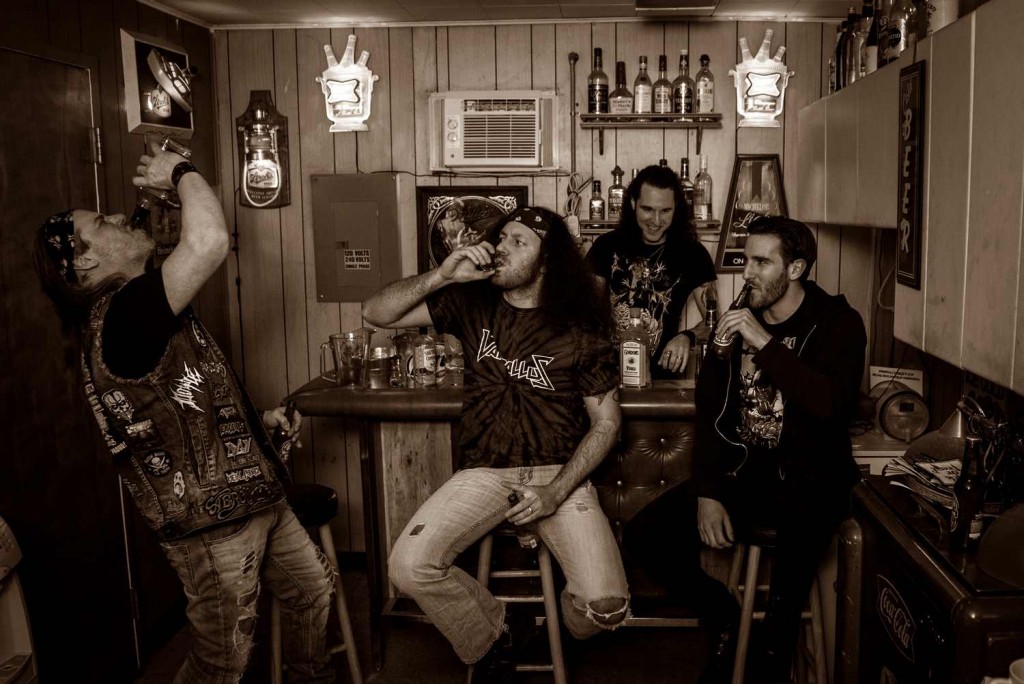 – VANDALLUS’ debut album is entitled “On the High Side”. What are your feelings on the final result? Does it feel exciting to unleash this first opus unto the world?
Its a great song. Its a feeling of busting a giant nut. The better part about this is that we captured in on a recording though. Its not a sticky situation though. I enjoyed recording this song and have been finding myself listening to it quite a bit

– VANDALLUS is rooted in late 70’s/mid 80’s Hard Rock basically, a quite classic style. What motivated you to form a project like this in first place?
Bands like UFO, Scorpions, (early) Dokken, Fastway and movies like Ferris Beullers Day off and Friday The 13th part 3.

– The album has certain TRIUMPH and DOKKEN elements, mixing 70’s and 80’s Hard Rock with some AOR nuances. Did everything end up as you expected? Or was it everything more of an spontaneous effort?
Very spontaneous. We knew what we wanted to record when we entered the studio so we stayed focused and let that shit flow out naturally. By the way Triumph «Allied Forces is a killer record and Im sure vocally it had a big influence on Jasons vocals. Jason rocks them high notes pretty well.

– It also has subtle Heavy and Speed Metal elements, such as in the opener «Rat». So what could you say have been the main musical influences for VANDALLUS?
Rat was written as it was being recorded actually. I just started playing a riff with Steve on the drums and we knocked it out fairly quick. It for sure has the same vibe and comes from the same era as the others. I would say.

– Lyrics are also quite classic so to speak, quite in the style bands and songs from that period. Where do you draw inspiration from to write them and what do some of them deal with?
Just stuff we could relate to. I think most people relate to being rebellious or a free spirit at some point in their life. If they cant, then they probably wont listen to this. We’ve done tons of dumb shit in our lives and its fun to reflect that stuff in the music. For example shooting potatos through someone elses basketball hoop. The idea is funny, right?

– Now there are a lot of bands providing a “retro” sound into different styles, both into Metal and Rock too but; what could you say sets VANDALLUS apart?
I dont know what sets us apart. Never really thought about it. I think some people get so caught up in sounding so «diffrerent» and musically it goes nowhere. Everything has been done at some point or other. My mentality is to capture a moment in time where you are at without thinking about it. Let that feeling run it. It shouldnt take long to capture it and if it does, its probably drawn out and sounds too fucking mechanical.  We’re not about that. I’ve played all kinds of styles of music and I feel all Im doing is capturing that paticular moment in time and playing it the best I can. If its not as good as I would like it to be, I just move on and do it better next time.

– This debut album is coming out with High Roller Records, a really good label for old school sounding underground bands I think. How did you hook up with them?
I feel the same about them. Its a great match musically. I just wrote stefan and asked if he liked the material and he said yes. They are an honest label. If they don’t like how you sound, they won’t put it out. There is no money involved its purely about putting a good record out that they all like. Simple and I like that!

– On the other hand, the sound on the album is really clean yet natural, which fits your style and spirit. How was the recording and production process? How did you get to have Arnie Acosta mastering it? 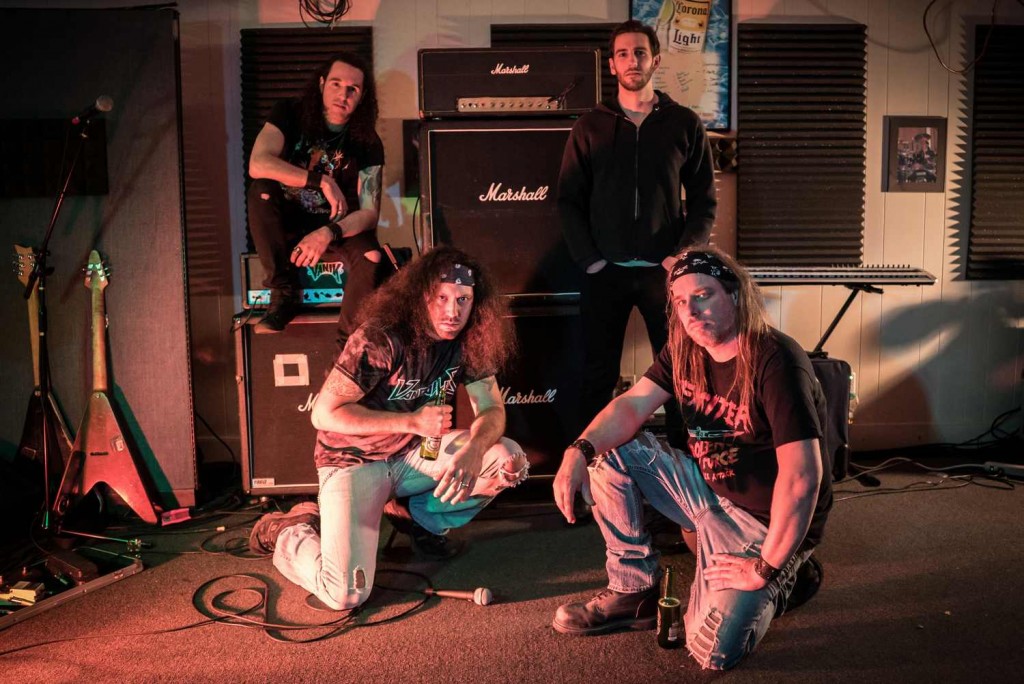 Thats what we wanted to accomplish and it looks like we did!  You know its hard to tell whats real and whats not anymore. So we just recorded it and didnt want to spend to much time with it. If the recorded take had the right feel, we keep it. No need to fix pick scratches or drum quanatizing or pitch shifting. That shits not real. but I suppose some people think it is. More power to them. We really wanted to record & master this album in a similar fasion of the classic albums from this era, hence why Arnie Acosta was involved in the mastering process.  He did many classics from that era and does great work.

– All this about «On the High Side» being said; how could you describe it in just 3 words?
Live, Fucking, Band.  Oh its live and we are a fucking band. Let us play your club. Give us any kind of amp or drum set and we will make it sound damn good.

– Last year, prior to the album, you released what I think was your first song ever released, a cover of FASTWAY’s «Trick or Treat». Apart from this, do you have any other songs recorded?
Yea there were a few outtakes from this album that didnt make the cut. But we do have a whole new record already written and we plan on going in and recording it shortly as soon as our brand new studio is finished.

– And finally, what are your near-future plans? Will VANDALLUS have more studio and live activity?
Yes, and we plan to come to play at your club, house, barn or whatever the fuck it is that you have.

– That’s all, thank you once more for answering our questions. If you want to add some final words; feel free to do it.
Thank you for the interest in the band.  Hope you all enjoy it as much as I do.  If not, at least it will make a nice drink coaster.