1- Hello, thanks for answering to our questions. What are you guys currently up to?
Rob: Right now we are just gearing up to release our first album, and we are planning some shows to support it.

2- First off, could you make some history of the band?
Rob: Well Chris and I met back in 2010 at I believe a Kreator show.  We attended a few more shows after that, and at an Exodus show at Gramercy Theater in August of 2010, Chris mentioned he was interested in starting a Thrash/Crossover band, and wanted me to play guitar.  Our first practices were at my house a couple of weeks later in September, and Chris showed me some of the stuff he had written, including World War Z.  Soon after, we recruited Nathan Wolff, who I graduated high school with, to play drums.  We recorded our first demo, Blood on The Ice in Late 2010/early 2011, although it was very poorly received because of the awful quality, as was our next release, Mother of the Resistance, for the same reason.  In June of 2011 we played our first show at the Meatlocker in Montclair, NJ and a second show in August of that year.  We later recorded and released SUCKS! The Stupid EP, which was Nathan’s last album with us.  We played a couple of shows with a fill in drummer, before Chris met Roger Padilla, who joined the band around late 2012/2013.  We continued to play shows, including our annual “Thrash Bash BBQ”, which we started in 2012.  We recorded our first album in the summer of 2014, but because of various schedule conflicts and other things getting in the way, we were not able to finish it until around January of this year.  In the meantime, Roger kind of unofficially left the band, essentially becoming a ghost, so we decided to become a two-piece, employing a drum machine at our live shows.
Chris: We met at the Kreator show through out friend Roberto, then a few months later Rob saw me open for Hexen, Mantic Ritual and Rattlehead with my old band Obliterator. Not too long after that, Obliterator split up and I was looking to start a new band. I wanted it to be different and unstructured – basically as far away from what I had been doing in Obliterator. I was really into Carnivore and I was angry and had a vision. All I needed was a name. One “Stone Cold” Steve Austin clip later and the rest is history.

3- How could you describe your sound?
Rob: I’d say we are a combination between Carnivore and the Ramones, with hints of other bands thrown in depending on what song.
Chris: We’re basically a chaotic blend of old school crossover/thrash and hardcore with no rules and cartoony hijynx thrown in.

5- How is the feedback for your new album being?
Rob: The few people who have heard it (still unreleased as of this interview) have loved it, and said that it is a huge improvement over our previous releases. 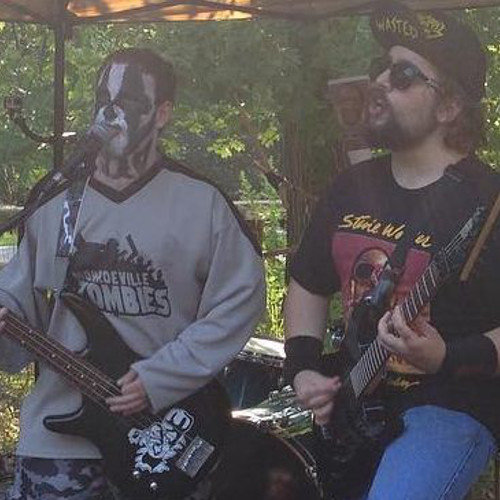 6- And are your personally satisfied with the final outcome?
Rob: Well, I am always my biggest critic, so when I listen to it, there are always things that I think could be better.  I do, however, believe it is very good; at the very least much better than our old releases.
Chris: This is the best work we’ve ever released by a landslide. The drums could have sounded better and it could have been longer, but we’ve learned from our mistakes and that’s what we’ll do with our future releases.

7- How could you describe this opus in just 3 words?
Rob: Fast, Raw, Offensive.
Chris: Angry, Stupid and Different.

8- How has the production process for your new release been?
Rob: It has been very long and very hard.  We started this way back in the summer of 2014, and never really finished all the songs then.  It took us another couple of months to get all the tracks recorded, and another year-year and half to finish mixing it.  I did the mixing and engineering myself, and just finding time to do it was next to impossible.  When I finally finished mixing it and sent it off for mastering, it was like a great weight was lifted off of my shoulders.
Chris: It took forever. Like Rob said before, we recorded this in 2014 and had a ton of problems and delays. For awhile I didn’t think it was ever going to come out, but we couldn’t let the game of Life win this round. Perseverance, frustration, heart, soul and guts went into this and I think it shows. Rob broke his ass doing the recording, engineering and mixing. I did the artwork. My friend Eric Feliciano did an awesome job on the mastering. It didn’t happen overnight, but the fact of the matter is that it did in fact happen and nothing can take that away from us because it’s here and it’s as real as you and I.

9- And how do you use to work on the songwriting?
Rob: Typically, Chris and I write our own stuff separately, then when we meet to practice we show each other the new stuff.  A couple of the songs on the album were brand new so we had to learn our respective parts when we were ready to record them.

10 – Finally, what are you near-future plans?
Rob: Right now we are gearing up for the album’s release, planning some shows for the summer, and working on Thrash Bash BBQ V, which will take place the last weekend of July this year.
Chris: We have an album release show at The Meatlocker in Montclair, NJ on April 13th – two days before the album comes out, then comes Thrash Bash BBQ V, which might be our last one for awhile and hopefully some shows in between and some after. We just want to support this thing and give back to people who dig it. The Meatlocker holds a special place in our hearts because it’s the first place we played, the first place we rented out and promoted our own shows at and helped us book, debut and meet a lot of our friends and on the 13th, it all comes full circle.

11- That’s all from our side, thanks again for taking your time to answer our questions. If you now want to add some final words; feel free to do it.
Rob: Thanks for the interview guys, and I just want to say I can’t wait for people to hear the album, we are very proud of it.
Check us out on Bandcamp: zamboni.bandcamp.com
and Facebook: https://www.facebook.com/Zamboni666/
Chris: Don’t die and listen to Zamboni.