– Hello, thanks for taking your time. How is everything doing right now in the PARASIT’s camp? What’s keeping you guys busy?
Hey Sergio! Well, all is fine here, waiting for the album to be released and hopefully we will have some gigs coming up afterwards. We’re not so busy at all because we have taking it easy lately but soon it’s time to rehearse again. New songs are already in the works!

– First off, for all those who might not be familiar with you yet; could you please share some history of the band?
Well, Parasit was formed in the winter 2010/2011 after we quit with our old Crustpunk band Uncurbed after 20 years in the scene (1990-2010). So I, Michael and Kenneth from Uncurbed started to make a bunch of songs and after a while Pjär joined on vocals and Rikard on bass. Then also Simon joined on vocals. Then it took us two years before we entered Studio Underjord and recorded our first album “Välj Din Egen Bödel” that was released by D-takt & Råpunk (Swe) on vinyl and later on Cd by Totalpunk records (Rus). Then we released a 7”inch Ep called “Bag of Enemies” by Nuclear Fear in Spain. Rikard was later replaced by Daniel on bass. Then in April 2015 we recorded our second fullength “A Proud Tradition Of Stupidity” in Communichaos Media Clay Station with Mattias Kennhed. After the recording my friends of Cyclone Empire was interested and we signed a deal with them.

– Next month you will release your second album, entitled «A Proud Tradition of Stupidity». What are your expectations on it?
I don’t know, I’m already tired of it because we recorded it exactly one year ago in April actually. But of course I

– This album is the best current lesson on what D-Beat/Crust is all about so, what could you say PARASIT is bringing new to this scene?
I think we don’t bring so much new to the scene. It’s just raw Swedish D-beat Crustpunk the way it should be! Nothing more and nothing less!

– You seem to be influenced both by the Crust and D-Beat scene as well by Death Metal so, what are some of your favourite bands or the ones that have been most influential for PARASIT?
Well, personally I must say Discharge, Meanwhile, Warcry, Totalitär, Doom and Extreme Noise Terror just to name a few….

– Being a quite straight forward style the one you are playing, is it hard to be innovative?
Yeah, of course! It’s hard to be original when all is already done for years ago. Of course we try to make songs with our own touch and it should be simple but with finesse.

– The great cover artwork is painting by German painter WÆIK. Why did you choose her and how did you work on the artwork?
The artwork was suggested by my old friend Hage at Cyclone Empire and I think it looked cool and would be great as a front cover. Rebecca Waeik is a friend of Hage and I have met her many years ago. I did the layout idea for the front cover and tried some different colour filters that became one for the Cd and one for the vinyl version. The layout and design was made by Cyclone Empires guy Karl-Heinz Schuster.

– Lyrics on the album are in Swedish so would you mind to elaborate a little bit on what do some of them deal with?
The lyrics are both in Swedish and English and all is about classic themes like society problems, the government, party and so on…

– The record features guest vocals by Jocke Hammare (MEANWHILE, PRICE OF SILENCE). How did the idea arise? And what could you say he has brought with his vocals?
Jocke is a great friend of us since back in the days and because we recorded with Mattias Kennhed that is playing in the same bands, it was natural to ask him doing some guestvocals. I personally like his special voice because he sounds very English and have a raw voice!

– This about «A Proud Tradition of Stupidity» being said; how could you describe it in just 3 words?
Raw, D-beat, Crustpunk!

– PARASIT has a line-up formed by well-known musicians into the underground scene. Does this make easier to reach more people or go less unnoticed?
Well, that’s right but I think we’re quite unknown so far because we haven’t been so active through the years. Of course we are more known in Sweden in the scene and hopefully with this new album we’ll be more known outside Sweden. It doesn’t matter so much because we just want to play punk and drink together.

– Due to this I would like to know if PARASIT is a serious, steady band or rather a fun project as you have some other musical priorities? 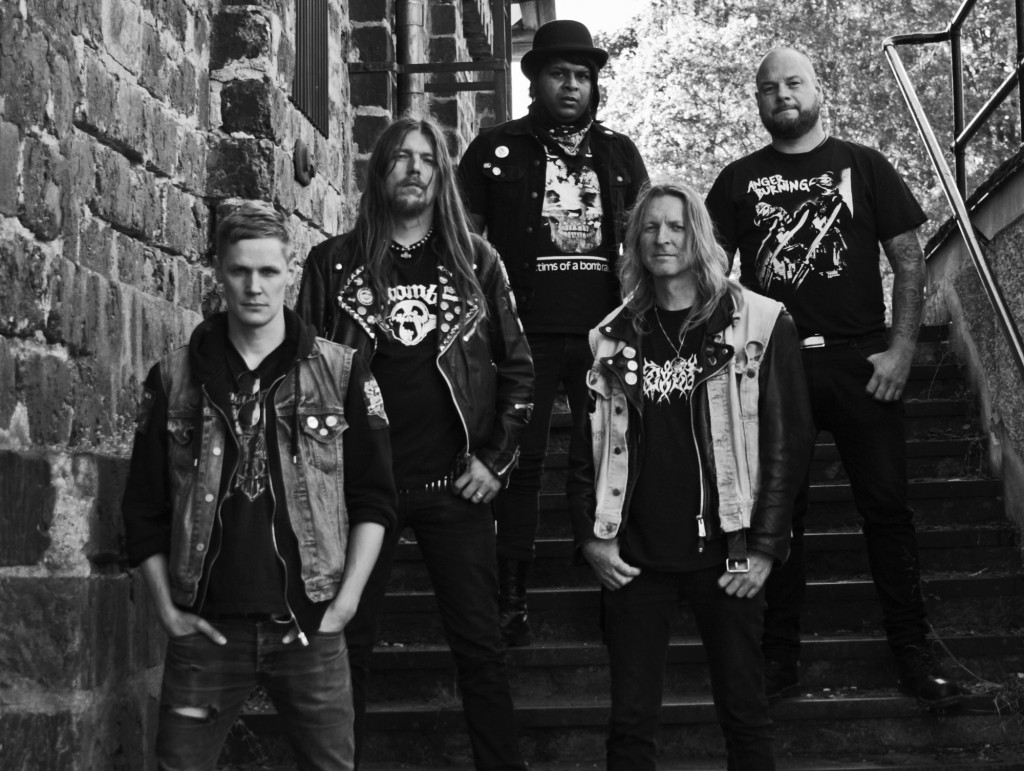 We are a definitively a serious band even that we haven’t been so active. I’m quite busy with my other band Interment and Simon has been a bit busy with his other bands so that’s one of the reasons. One other reason is that we had hard to find rehearsal dates including all members because we live in different cities. Hopefully we get more gigs and festivals and maybe a tour this year because we’re all looking forward to play more live!

– And finally, what are now your near-future plans?
Well, as I said, we hope to play more live now and we probably set up a small European tour after the summer. Then we will work on the next album because we already have a bunch of songs that we will start rehearsing anytime. It would be really awesome to come to Spain and play as well so if there is any promoters out there, just get in touch!

– That’s all, thank you once more for answering our questions. If you want to add some final words; feel free to do it.
Thank you so much for the interview and remember to check out our Facebook page for updates and shit. Cheers and stay underground!
/Johan
PARASIT
www.facebook.com/parasit666
parasit.bandcamp.com