Saltar al contenido
– Hello, thanks for taking the time. How is everything going right now with ABYSMAL GRIEF?
R.G.) Hi Tania, in this moment we’re refining the details of our forthcoming european tour. Many things to do
actually…
– Last year you released your newest album, «Strange Rites of Evil». Now that have been a few months since it came out, what are your feelings on the final outcome?
R.G.) We’re extremely satisfied of the final result. Both production and songs are exactly what I wanted to
obtain during the process of recording and mixing, and so far this album gave us a lot of satisfactions, even if we
released it only 3 months ago! People like it, and reviews and sellings are even better than in the past, so we’re
enjoying the moment.
– This album sees the return of your original drummer, Lord of Fog. How did this come to be?
R.G.) Absolutely by chance: we’ve always been in touch during the past years, but we never talked again on the
opportunity to reunite, as we were both very busy with our projects. It happened at the end of 2012 when our
previous drummer decided to leave and his previous band splitted. Everything is working fine with him now.
– Musically you remain true to yourself, but lyrically, still with quite dark lyrics, you don’t seem to focus that much on ritual as you used to do in the past. So how much of your inner self (thoughts, feelings, experiences…) are you channeling through your lyrics?
R.G.) Don’t consider the lyrics of this last work as a change of direction in our Philosophy! As I already said
many times, this album is just a kind of deeper statement about how Death and its shadow influence religious
people, and the bizarre duality of catholic rites and superstition. I felt I really needed to talk about something
like this, for my personal development in these topics and also to show people that our approach to Occultism
is not just a shallow repetitive use of “cool” concepts and imagineries, but a bit deeper journey into a more
complex world, where ritual mysticism must have somehow its equivalent on the material side. Now people
know a bit more of us as men, as well as occultists.
– And, to what extend does the album’s title unifies all the elements on the record, from the cover artwork,
to the lyrics and sound?
R.G.) The title and the ironic pictures on front cover and back have the main purpose to give a quite clear image
of the whole mood of the album. Since the beginning you can perceive that you’ll find a slightly different
approach this time: Occultism and mysticism have been momentarily put aside to focus on something more
“philosophical” (to use a very exploited word).
– In fact you are a band that has always put a lot of focus on your visuals and also on your imagery. Could you say every little element on ABYSMAL GRIEF is part one whole thing? 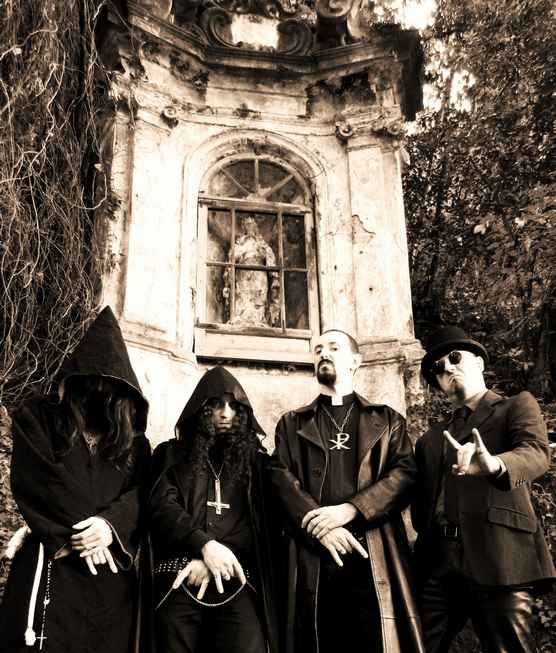 R.G.) Definitely. Music, lyrics, graphic, and live scenographies are deeply connected to communicate our
message. I recognize it’s harder than for many other bands, but at the end of it all it can provide to the
audience a musical experience thousand times deeper and more complete than a normal recording or exhibition. That’s probably the peculiarity of Abysmal Grief, according to our intentions.
– And talking about such, how did you work on the artwork for «Strange Rites of Evil» and what did you want to depict with it?
R.G.) It started all from a very old book from the beginnig of ‘900 I found in the old house of my grandmother
many years ago. It was a sort of agiography of some saint or blessed nun from Italy, and apart from the written
trash, I really loved those illustrations, and in particular the one regarding the moment of her Death, so I’ve just
being waiting until the right moment to use it. Also the other illustrations inside the booklet have the same
intent to reproduce a sort of “holy” book for devotees, in a very ambiguous and ambivalent meaning.
– Musically I could say this is one of your angriest and more straight-forward albums to date. Was this a
conscious direction you wanted to take? What did affect this more furious sound?
R.G.) Yes, it’s undoubtedly our angriest work so far: it just came out naturally, it’s a statement about a deep
awareness of spiritual superiority and integrity from religious dogmas and superstition. I really don’t know how
to explain the choice of the subject or the musical style we obtained during the recording sessions: for us the
main purpose was to release another typical Abysmal Grief album, and this is the result.
– Due to this, if you don’t mind, I would like to know how was the songwriting process like for this release.
R.G.) Exactly the same as the previous one and the next one: I compose alone all the guitar riffs, and when I
have built a rough structure for a song, I meet with Labes and we work together on the composition of
keyboard lines. Then I start alone again the work on lyrics, and finally we meet all together to rehearse. Anyway,
I must say that since the return of Lord of Fog, we decided to let him take part a little more into the
arrangement process of drums: it was unavoidable, as he is a great drummer and he knows better than all the
previous drummers what we need, so it’s a added value.
– You included a cover for BEDEMON’s «Child of Darkness». Undoubtedly a cult Doom Metal act. Why did you choose this song? And what changes have you done to it? As I think you have put a lot of your personality, giving it a more eerie atmosphere yet keeping the 70’s vibe.
R.G.) Yes, keeping the 70’s vibe was important, as I grow up with these sounds. But I think the final result is very
heavy and a bit more solemn due to the addition of the church organ, unavoidably. I wanted to record this
cover because I loved the guitar riffs first of all, and then because the lyrics have that “strange” subtle evil mood
that was fitting perfectly with my lyrics.
– In fact you have always had a really Dark sound. I have always thought underground Rock and Metal bands hailing from your country have something in common: the macabre, dark and horrific atmosphere. What do you think is the main reason for this? Italy is haven for many classic/cult horror movies, maybe most bands are also inspired by this?
R.G.) Italian Horror culture has very deep roots, coming from a very superstitious approach towards life and
Death, and that’s the reason why many forms of art developed in this particular way. You are referring to music
or cinema, but I could tell you also about great italian horror comics from the seventies as Jacula, Oltretomba,
Terror, Cimiteria (just to mention some) or the more recent Dylan Dog: we were having these ones at the same
time while americans were reading the Marvel shit… So you can easily understand what makes the difference!
The motivation is extremely simple: the strong catholic oppression we had during the centuries got the
opposite result to create vast “shaded zones” in our minds, feeding a really morbid fascination for everything
directly or indirectly connected to the mistery. There’s a lot to take inspiration from.
– And what does inspire ABYSMAL GRIEF for its sound and ambiences apart from music?
R.G.) Nothing in a specifically direct way. I always liked to use music to enter a bit deeper into MY “shaded
zone”, and let it flow out without too many references to any particular subject. But this regards the instinctive
and irrational approach to music, of course, while it’s undeniable the deep influence we had from the study of
Occult texts since we were teenagers. Our music is a well balanced mix of these two elements.
– All this about «Strange Rites of Evil» being said; how could you describe it in just 3 words?
R.G.) Extremely difficult question! Also because I should avoid using words which have already been overused
(even if absolutely correct and appropriate) by reviewers in these last months, as “instinctive”, “direct”, “angry”
and so on. Probably now, listening to the album again after some months of break,I would describe it as RAW,
PASSIONATE, BLACK. 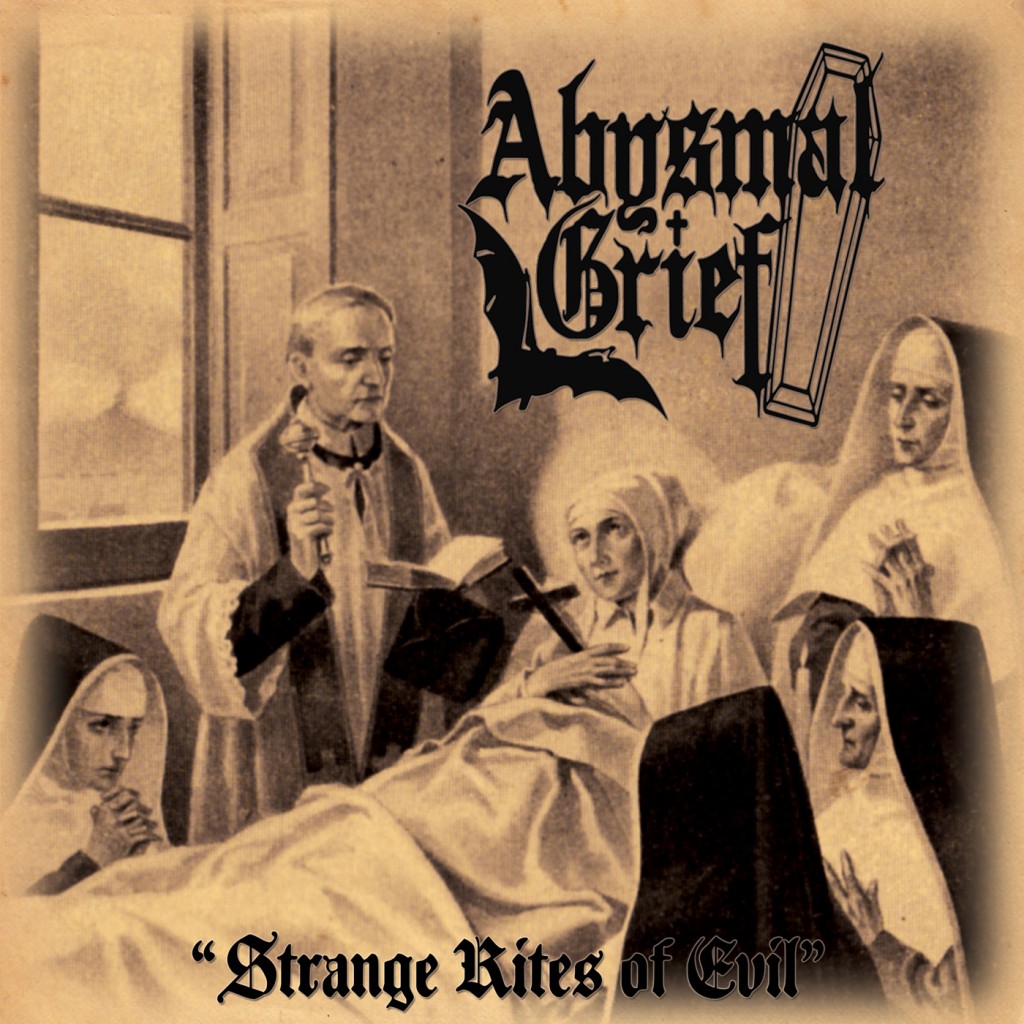 – This year marks the 20th anniversary of the band. Is there anything special going to be planned?
R.G.) We’re planning a very special release for die-hard fans, but no details at the moment.
– I also read you have worked on some songs for a split release with EPITAPH. Is there anything you could already tell us about it?
R.G.) It’s just one long song, entitled “ Dies Funeris” and will be available during next April European Tour with a special limited gift, only for those who will move their asses away from the awful Facebook and come to see the
shows.
– And finally, what are now your near-future plans?
R.G.) Well…Tour, Anniversary release, again another tour and festival appearences, and then maybe finally
working on a new album: I’ve already composed new material and I don’t like to keep it buried too long…
– That’s all, thank you once more for answering our questions. If you want to add some final words; feel
free to do it.
R.G.) “Simple Scorn is Never Enough.” In Death. R.G.
​
Tania Giménez
tania@queensofsteel.com