– Thank you so much for answering to our interview. How are you doing close to the release of your new album?

Hey Paco, thank you! I’m feeling good. The release of our new album was already last week, and the first reactions are very pleasent.

Now I’m really excited what the people think about Beneath The Surface.

To have some great reviews in magazins is very helpful and satisfying, but more important is, what the metalheads think about it.

– This is your second opus, tell us how has its songwriting been and if everything has ended up as expected.

I started to compose new song, already before Man Or Machine was released.

I needed nearly one year to write the 9 new songs for Beneath The Surface.

We went to studio in June 2012. 2 weeks later, the recordings were done.

Most time we spend for the mixing session. We had to chance our mixing engeneer, because we though that we need a different sound to our first record Man Or Machine. So it lastet until September to find a sound, with which we agree to 100%.

We don’t wanted to sound too old fasioned, but also not to modern. It was a tough challenge, but now I’m finally happy with the result.

– The record is entitled «Beneath the Surface», tell us a bit the meaning behind the album’s title and everything related to the cover artwork and tracks.

In the focus of the cover you can see the Demon “Mammon”, he stands for all the things, which going wrong in this world. Greed, Abuse of Power and things like this. Beside of the demon you can see some politicians, lawyer and banker.

Beneath The Surface is a metaphor, that nothing is like it seems to be.

So the reflection in the desk shows the real faces of this “shadow government”, the root of all evil.

And the burning dollar notes stands for the bad influence of money in this world.

I’m very interested in political stuff and conspiracy stories, and I tried to reflect my opinion in our artwork

– Listening to the effort the most outstanding feature is that touch German bands have always had, specially HELLOWEEN. Are HELLOWEEN one of your main influences when it comes to compose?

No, actually not. I really like Helloween! We did a lot of shows together with Gamma Ray and Unisonic, so we met Kai Hansen and Michael Kiske several times and we talked a lot together.

But it would be too easy for us, to be only a Helloween Rip-off. Escpecially due to the fact, that we are also a german metal band. So we tried to find our influences somewhere else.

But its always hard for me, no name my main influence, because I love every kinds of Heavy Metal, it doesn’t matter, if its a German Metal Band, a Band from the UK or from the United Staates, or from somewhere else.

I listen to every kind of music and try to combine all this stuff to a very own style.

I know, its really hard today, to create something new, but we are standing at the beginn of our journey. I think we will find more and more to our own style over the years. 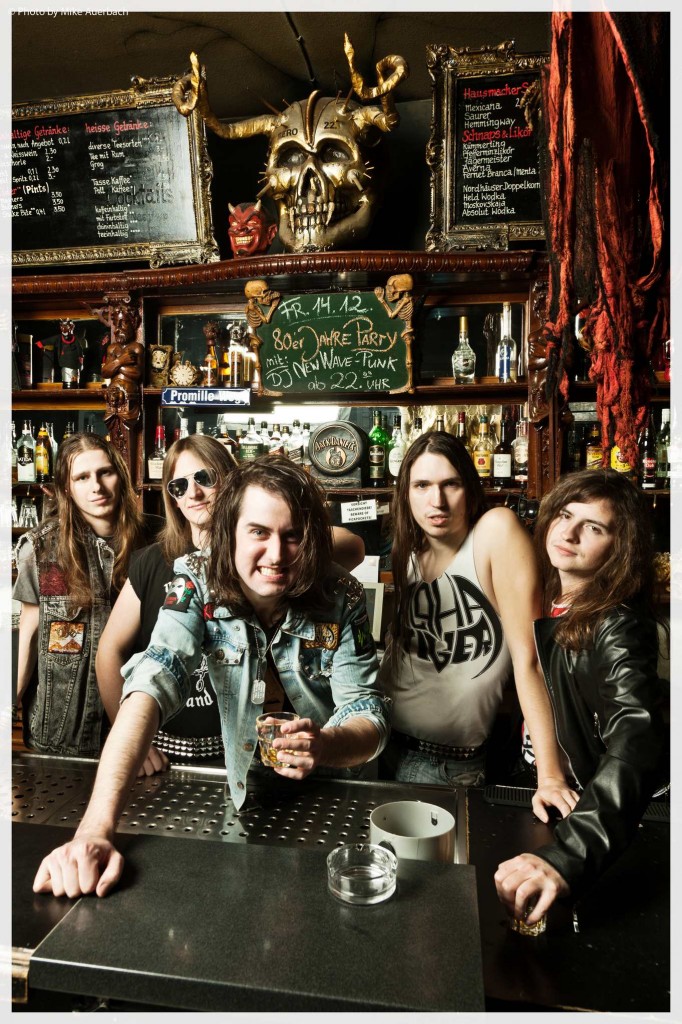 – Are also clear on the album some passages and vocals at the QUEENSRYCHE’s style that add a touch of distinction to the CD. Is this another of your favourite and influential bands or did it just come out like this?

At first I have to say, its a very nice compliment to be compared with bands like Queensryche or Helloween. But it was very important for me to go in a own direction, away from our influences.

Our singer Stephan surely likes the old Helloween records like Keeper Of The Seven Keys 1 & 2 and also the Queensryche records of the 80’s. Some people compare his voice with Kiske, other people with Geoff Tate or John Arch, but actually he always tries to sing in his own style, so he don’t change his voice, just to sounds like Kiske or Tate, its only the colour of his voice that reminds a lot of people to the compared ones.

– And then one of the songs that I liked the most is the title track, it has a start with a certain JUDAS/»Painkiller» sound, with a middle part quite melodic, and it ends just at it starts. I think it defines really good your music style. What are your thoughts on this?

Yeah, you got right! The song „Beneath The Surface“ has all or trademarks inside and combine all the element of Alpha Tiger. Thats the reason why we tooked this song for the title-track.

I think its important for a band to have some signature songs like this, because there’s a huge range within our album. From slow to fast, from soft to heavy.

And when someone, who never listend to Alpha Tiger before, ask how the band sounds. So you can show him this Song! 🙂

– On this album you have worked with Century Media, how has the experience been? What are the main differences between the ALPHA TIGER of the first album and this new one?

When we were signed by Century Media last year, Beneath the Surface was already finished, even the Artwork was done long time before.

So Century Media had no impact to the record. But they did a great job in promotion in whole europe to support our new album.

Its great to work with this guys, because they have a lot of experiences in this buisness and they are able to push us to an further level.

The main difference between Man Or Machine and Beneath The Surface is, that we sound more grown up now.

The compositions are more thought-out and the lyrics are more personal now.

Also the songs are a litte bit more emotional, than the older ones.

I earned a lot of really important experiences last year and I wanted to reflect them in our new output.

– You are hailing from Germany. I always followed the 80’s German scene, bands as STORMWITCH, TIRAN PACE, TRANCE, VETO or GAVESTONE were unknown for the vast majority outside German borders. Nowadays is way easier to have access to all this, and you are young people but I consider the German audience one of the most expert ones so, are all these bands part of your life as well?

Yeah, thats true. It seemes that most of the german metalheads have a whole encyclopedia of metal in their heads, they know every little band of the 80s, even when they only brought out just one single 4-track ‘7 EP.

I guess, I’m one of them 🙂 But only because I try to listen as much as possible to different bands. But I don’t need to share this „wisdom“ with other people, I do it only for myself.

TRANCE for example is a really cool german metal band!

– I would like you, for all those who may don’t know about you yet, to tell us a little bit your first steps as APLHA TIGER, how did the band born.

Allright! We started in 2007 under the name of Satin Black. At first we did some Metallica Coversongs, I guess like every young band.

But soon we started to compose own songs. When we started I was the singer and guitar player, but in 2008 we decided to hire a real singer. Robin joined the Band and we recorded our first record Harlequin. 2009 Robin left the Band and Stephan joined.

We were able to change our musical direction, because of his his high vocals and classical vocal education.

So we become more and more melodious and ambitious.

With Stephan we recorded the Martyrs Paradise EP in 2010. Based on this EP, we got our first record deal with Sonic Attack, the new founded record label of Karl Walterbach, the former of Noise Records. And in April 2011 we released our first Alpha Tiger record.

– Y and how has been the history between your first album unitl this new one? Have you played that much?

We played a lot of shows and festivals, for example the Keep It True festival and Headbangers Open Air in 2012, and the Rock Hard Festival and Hellfest in 2012. And last but not least, we were on tour WASP. We became more and more popular, so we got finally a offer by Century Media.

– I had the chance of seeing you guys at Keep it True, a fest that I use to assist since some years back. How was the experience like?

The Keep It True Festival is a very speical festival for me. This festival is the heart of the german underground scene, and also a mekka for metal manics wordwide!

Some years ago it was my goal to play someday at this festival.

I never thought that it would ever become real someday, all the more not so soon!

The festival was simply awesome! It was the first bigger festival that we played back then, and the audience was very great!

We ended our set with the Queensryche song Queen Of The Reich and the crowd was confident! After our show we could enjoy the festival. Its a great organsiation and the whole team is very kind! They don’t treat you like a unimportant small band, they treat you like every other band, which played on this festival, and thats the greatest thing! Backstage we had the chance to talk with bandmembers of Crimson Glory, Vicious Rumours, Saracen and many other great bands.

– And coming back to your new release, how is its promotion situation? Will you tour? Play any festivals?

At the moment we play some releaseshows to support our new record. In April and Mai we will do a own Headliner-tour with a cool bandpackage, which we will announce soon… Stay tuned, it will be a big surprise! 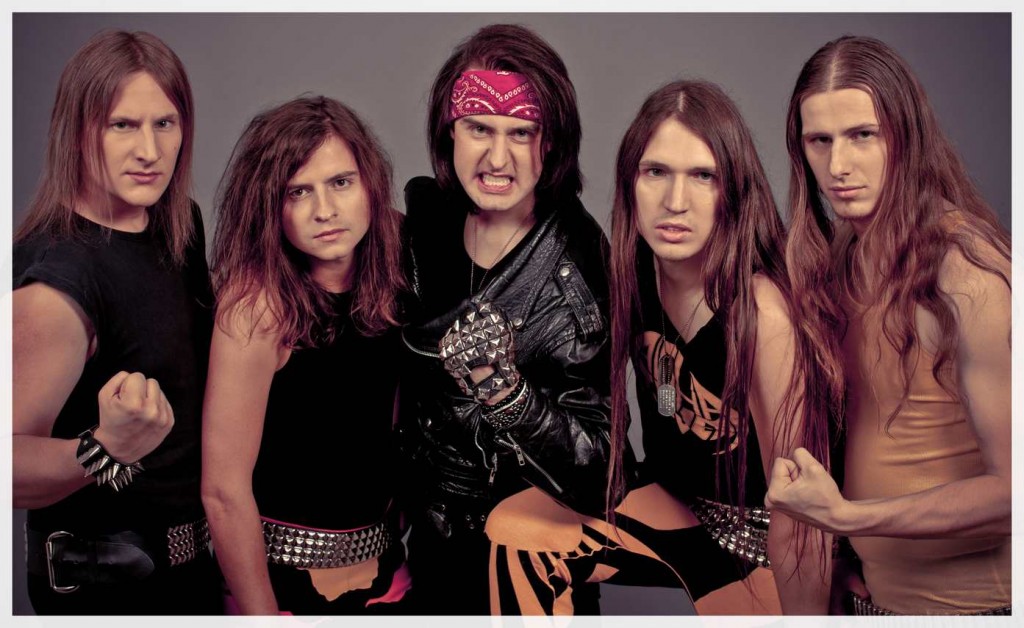 In sommertime we gonna play at awesome festivals like Bang Your Head Festival, Rock Harz Open Air and of course, WACKEN Open Air.

Also we’ll play at two large festivals in Czech Republik. I’m sure that there will another cool announcements follow. Its gonna be a exiting year!

– And on a view to the future, what are some of your projects? I know is maybe too soon to ask this question but, how do you think will your next album be like? Do you already have something in mind?

I think we will start with the recordings of our third record in Autumn 2013.

But its to early for more details. At the moment is the release of Beneath The Surface the most important thing for us, and we’ll see what happend. I hope that the people like our new record, and that we get lots of offers to play.

Would be so great to play some shows in Spain, or in the rest of Europe.

So please let me know when someone wants to book my band for some shows!

We surley come around!!!

– That’s all from our side, our best wishes and hope to see you in Spain or Germany. Thank you.

Thank you very much! Hope to see ya, and big regards to all the crazy Metalheads in Spain, we can’t wait to rock with you!