– Hello, thank you for your time. You have just released your debut album. How are you feeling about it? What are your feelings on the final outcome now that it’s done?
Thank you very much for having us on your pages. We are very excited about our debut album, as we have been struggling to get it done for quite a few years now. We must admit that we are pretty pleased and satisfied with the final outcome, everything turned out ok. The guitar tone is incredible, so is the mixing and of course the final mastering. Everything is heard as it should be, loud and clear, at the proper volume.

– Starting to dig into the band, why did you choose the name «Mortem Atra»? What does it mean literally and personally to you?
The name “Mortem Atra” is derived from our frontman’s love for the Latin language. In plain English, it is translated as “Black Death” which is kind of predictable if one has met our singer (Takis Antoniou). For us as a band, that name now means something magical, our journey into the world of metal. Hope some of our fans feel the same too…

– Your first album is entitled «A Dark Lament». How does the title define or depict the content (on all levels) of the album?
The title of the album is based on our lyrics, which origin from dark matters and kind of depressive themes. The album is a dark lament, an endless grief combined with dark entities and spooky stories about puppets and puppeteers to rule them, as in real life that is….

– What is the concept behind this record?
In addition to the ones mentioned above, the concept behind our album in based –again- on our lyrics; internal struggles, self-awareness, with a bit of goth to bind everything together, even some magic to combine them all is what we are talking about.

– It is a very visual music, with an almost gothic imagery; it feels sort of a dark fairytale. Was achieving this sense of wholeness something you were striving for?
That was our intention, yes. We strived to find the balance between nice melodies and appealing lyrical themes that would cause the listener to project his/hers own, true feelings.

– Any body of work requires several different elements to make it work and be effective. What do you think are the main ingredients to get this?
As to anything in life, if you don’t put some effort and hard work into it, it will not come out as you imagined it. That is the case with us also, and with our debut album too. Persistence and hard work from all of us is what made us what we are today, whatever we are anyway…

– You play an amalgamation of different styles with melodic Death Metal and Doom Metal as the main core so to speak what, what have been some of the most influential bands for the music of MORTEM ATRA?
Because all six of us have different musical backgrounds and influences, let us state some of the common ones. Draconian, Paradise Lost, Candlemass, Rotting Christ, Nightwish, Moonspell, Iron Maiden and Motorhead (the bass player’s a HUGE fan of the last two).

– And what does inspire you outside from the music realm? It can be a moment, a trip, a memory, a book…
Each one of us has different stimulus. Valantis and Takis (guitar and vocals respectively) find pleasure in reading horror stories; many of our lyrics origin from that. To generalize it, if we could just describe our musical motivation in one word, that would be “struggles”, and the need to express our deepest fears and concerns in a melancholic way sort of speak.

– All this makes for a varied yet cohesive album. How do you manage to get cohesion? How easy is to get a good equilibrium between variety and coherence?
That’s the million-dollar question. Many musical backgrounds inevitably mean too many hours in the making. Each one puts different input in the songs, different feelings and emotions. It’s not easy, but as all things, we work hard to accomplish the desirable outcome.

– Unfortunately in 2016 you have to face the death of your drummer Tasos, to whom this album is dedicated to. You are a band with lyrics dealing with human emotions so how do experiences like this affect the band also on an artistic way?
All songs except one were written before Tasos passed away. He recorded the drums prior to his diagnosis of the disease. Losing Tasos left us a bitter taste; it was hard on us, and it was even harder and harsher on his family. Musically, “Depressed” was written on that occasion and for all cancer patients worldwide. It is the story of Takis’s mother, who she also passed away from cancer. Death can stimulate us to be more creative, but on the other hand, such a loss cannot leave us unscratched.

– Now you got Antonis behind the drum kit. How did everything arise?
Antonis was our friend before any of these were going on. His musical influences and taste is similar to the rest of us. He replaced Tasos when he was already unable to perform, since we had scheduled concerts during that period. Naturally, we asked him to join us after Tasos passing. After a bit of persuasion from our side, he said yes. We’re glad he’s in the band, great addition.

– You also were signed to Pitch Black Records. How did this cooperation born?
We first met Phivos, the manager of Pitch Black Records, in March 2013, when we played at Hard Rock Café at the Battle of The Bands show. We can say he kept an eye on us from that time on, and we kept in touch the whole time. He also being a Cypriot really eased our decision to sign in with his label, and now we are pretty happy about this. Great company and great promotion.

– All this about «A Dark Lament» being said, how could you describe it in just 3 words? 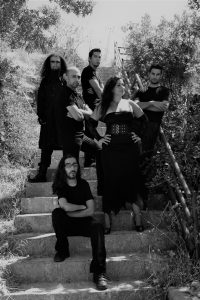 – You are hailing from Cyprus, a country that isn’t really known because of its Metal community. How is the Metal scene over there? Are there any bands you would recommend?
The local metal scene is not as minor as an outsider may think. Sure we are a small island, but there’s lot of metal action in us. We have many bands of different genres, many webzines and metal radio shows, and even a TV show was once broadcasted at some point. Classic, epic, heavy, death, doom, black, progressive, speed, thrash, nwobhm, tribute bands, we’ve got it all. Lots of bands to check out, don’t want to leave anyone out of this, so may we suggest a google search? That way anyone can be happy…

– How easy is to stand out as a Metal band there and how is like playing in Cyprus or in Limassol? As being based in an island makes you be somehow geographically isolated.
Limassol is Cyprus’s second biggest city, but don’t get your mind thinking we’ve got megacities on our island. Getting a gig or just being heard is relatively easy, if you’ve got connections with bars, radio hosts and music venues. But, if you lack at that field, then you are doomed to struggle. We are somewhere in the middle. And our unique feature that makes us stand out from the rest of the metal bands in Cyprus is the mixture of both brutal male and clean, almost operatic, female vocals. This combination cannot be found easily in any other band on our island as we speak, we are almost unique.

– And now, what are your near-future plans?
We are planning a mini tour next summer that would consist of gigs island wide and maybe a few of them abroad (we are open to suggestions and invitations btw). In the meantime, we are in the process of writing new material, hopefully to be circulated in 2021.

– That’s everything from our side, thank you again for taking the time to answer to our questions, if there’s something else you’d like to add, it’s your turn.
Thank you very much for this interview, and let us thank our fans and metal audience that has supported us throughout the years. Cheers