– Thank you so much for answering our interview. How is the band currently doing. with the release of your album?

Blumi: “Ultima Ratio Regis” seems to be very successful again just like our releases before. We got to do a lot of Interviews these days and seems that it won´t end. Well, its better than to be ignored by the press.

– This new «Ultima Ratio Regis» is your fourth studio album. Before digging into it, tell us a little bit, for all those who may don¡t know it yet, how did the band born and how was it formed.

T.P.: In the late 90th, no one seemed to be interested in traditional metal. So we started to play some covers of our 80th heroes and had a lot of fun. Some friends came to the rehearsals and asked us to play some songs at a big garden-party. So we did, and it was a success with all the old songs, even many people hadn`t heard them for years and were now fixed on again. So we started. Parallel to this cover-band, Blumi got the idea to form another band with own composed songs. And so he did together with El Rojo, KronoS (bass, member until 2010) and Tormentor (drums, Desaster). Metal Inquisitor was born. After the release of a demotape and a single, first shows have been played. But Tormentor did not have any time for two bands and left the band. Then Havoc and me joined Metal Inquisitor what meant the same line up as the cover-band. So we decided to do only Metal Inquisitor, which was no surprise, and first we mixed our live-shows with own songs and covers. But step by step, we played more and more own songs, recorded another demo and finally we got a record-deal. Until now, we released four studio-albums, one live-album and several compilations.

– Since your first abum, «The Apparition», until now have been a lot of years and just a few records; what’s the main reason behind 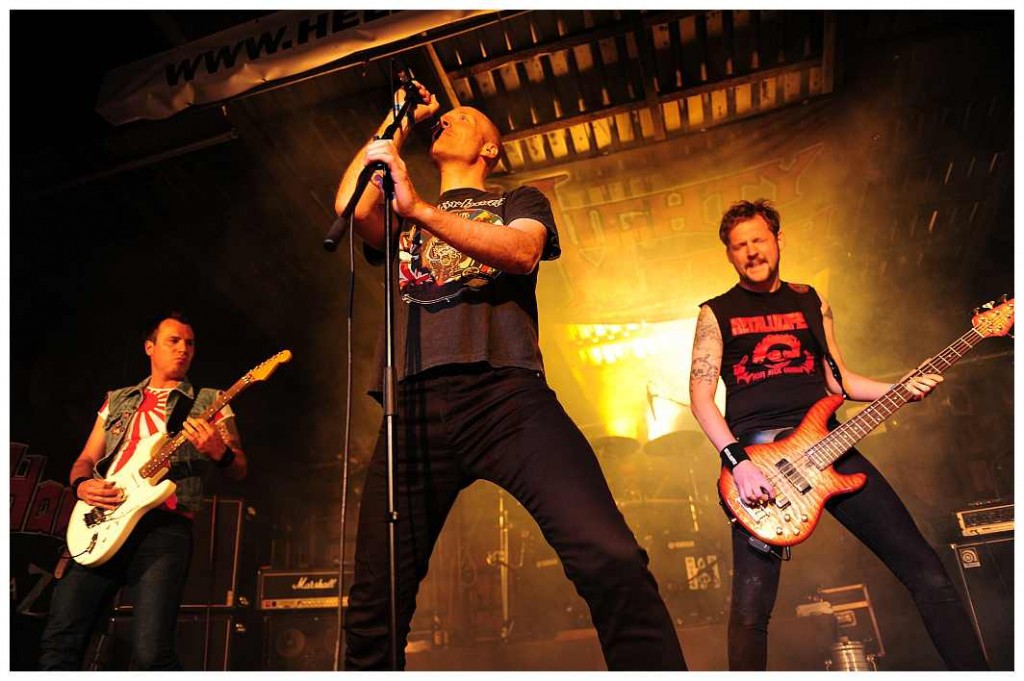 this? Are you busy guys into other tasks aside from music?

T.P.: We simply need the time to write the songs and to make the finetuning. You should know that we can rehearsal only once a week, and sometimes we must cancel this only one because of our jobs, family, illness or holiday. So time goes by very quickly…

– As I said, your newest opus is entitled «Ultima Ratio Regis». Tell us a bit about the title’s and cover artwork’s meaning.

El Rojo: The Latin sentence » Ultima Ratio Regis » was marked in the Prussian guns of the 18th & 19th Century. Translated it means something like: «The extreme, the last possibility of the king», «the ultimate weapon of the king» or «the king´s final argument» . It should be less a threat than a warning: If this instrument is used, it can be controlled very little. And it is possible that the result is not within the meaning of the king – wars can topple kings! Today, such an inscription would be superfluous, since nuclear missiles end it all: Nuclear war couldn´t be a » instrument of political discourse «! But the warning «Don´t use incontrollable toys» should be still actual to every politician! Last but not least our mascot in front of the cover is the «ultimate weapon»: The knights nearby look awesome, humble and fearful inclined before HIM: the mighty, the most brutal, the most superior – who is so powerful, that even the king basically shy away from unleash him: Because he is ultimately, he is unable to control, and there is always the possibility, that he could destroy the king himself…

– The album is a true hymn to Heavy Metal, the influences from classic bands are obvious and so is your own personal touch, specially El Rojo’s vocals. Are you satisfied with the final outcome?

El Rojo: In studio I sing exclusively in a way that I can do also live on stage – apart from a cold-induced hoarseness . Some parts I would like it better if my voice were higher, deeper , punchier, cleaner. But then maybe I would sing only one note! And then so long until it fits. Or, you might work with effects. Both ways are not mine. I work ​​within my vocally possibilities. And I can live with. If others like it: good! If not, then not.

– Listening to the album, as I said earlier, I see influences of a lot of bands, such as JUDAS PRIEST, METALLICA or DIAMONG HEAD, as with your previous releases, but this time around I think this is a more melodic opus, more danceable and perfect for headbanging. Were you looking for this sound or is it just a personal appreciation?

Havoc: We’ve brought the songs more to the point. is part of the songwriting so. it’s about an idea or a riff the best possible way to pack.

T.P.: We always try to write the best songs we can to that time, collect our ideas and arrange them together. So it is difficult to navigate an album into special direction. We work with the ideas we`ve got and hope they fit together and that the final result is a good song. When we go into the studio for the recordings, we try to make it better than last time. Better recordings, better sound and at the end a better mix and mastering. We had talked about the guitar-sound and worked with it weeks before we went to the studio. And now I`m very happy with that sound. About the sound of the other instruments, we let Olof (mix) work and when he presented the first mixes, we only wished a few things to change. And in my opinion the sound fits to the music, and it sounds fantastic.

– How do you think has the evolution from your debut album to this one been? Is there anything you would change about your career?

Havoc: Every band goes through a development. Over the years of our experience one acquires the flows into the songwriting. Thus, it remains fresh and can define their music in more detail. as we call hobby metal inquisitor as there is no necessary evil.

T.P.: We are happy because we are still existing. Over the years, we had many problems of different kinds, and somehow we found solutions, are still alive and have fun with the music and the shows. Many bands have been killed because of such problems. Musically, I would say, we are nowadays more varied than on the debut-album. And over the years one doesn`t become worse on its instrument, so there are more and more possibilities and variations to use. One thing I would have changed is to use the help of a management. We, especially Blumi, manage our band by ourselves, which is becoming more and more difficult. 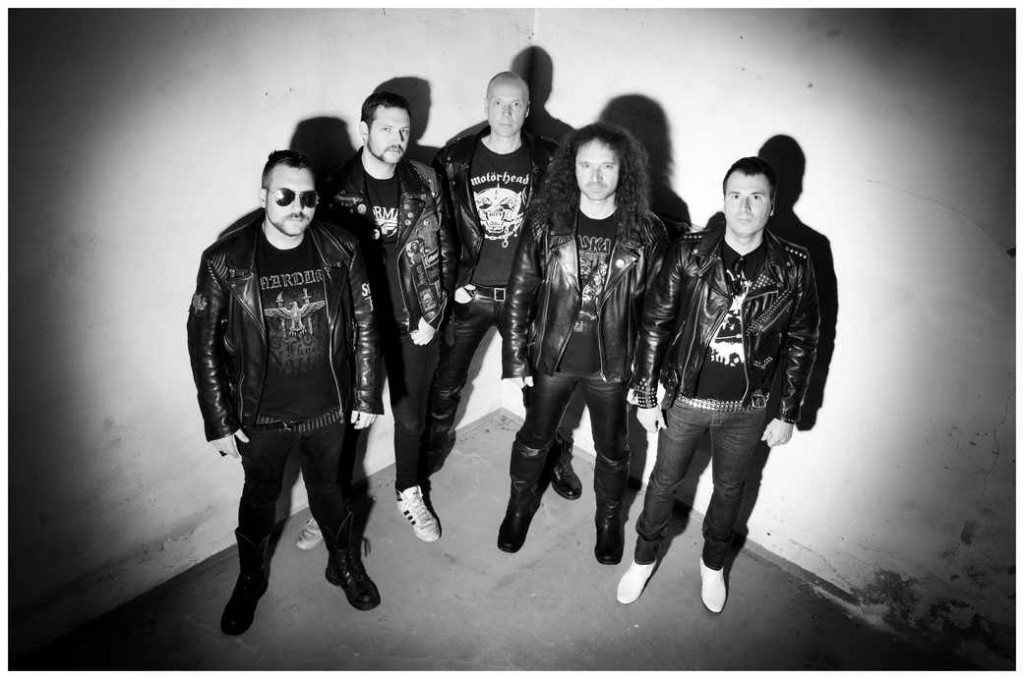 – You are hailing from Germany, but on your albums most times you are closer to the NWOBHM or even to the 80s US Metal, but a lot of choruses could have been written by acts such as ACCEPT, HEAVEN’S GATE or SINNER. Do you prefer bands external to what Teutonic Metal was when it comes to get influences?

Blumi: Indeed we prefer much more the Metalbands which doesn’t sound german at all. But it seems to be the fact that we can´t deny our roots in Songwriting. I have to admit that the unique Running Wild influence is absolutely intentional. But as you already really realize we are rather influenced by Anglo-American metal. In particular we see the Metal-transfer from England to America fascinating, which shows very clear in Metallicas “Kill em all”. The whole album is more or less an aggressive continuation of Diamond Heads «Lightning to the Nations».

– I had the luck of seeing you playing at Wacken once and I had a great time. What are your memories from your show in that festival?

Havoc: In my view, one of the best concerts ever. the tent was full, the atmosphere incredible. I had the best monitor sound on drums I can imagine. the band was in top form and it went very well. it was ne mega party that I will never forget.

– Another important festival is German’s Keep it True, I also saw you there, but on that show El Rojo wasn’t on vocals. What happened in that fest?

El Rojo: I was ill. Nothing more, nothing less. A lot of people asked this time: «Did El Rojo quit?». I can´t understand, because Blumi told everybody «El Rojo is ill»! By the way: It makes no sense to me, standing on stage with high fever – God gave me only one body, one health and I have to take care about it…

Blumi: After all I have to say that it was maybe not the best idea to do a show without El Rojo. Even if it would have ment that Brian Ross and Jess Cox would have come for nothing to the K.I.T. Our Single “Trial by Euthanisia” is a Live-Recording with both at this K.I.T. But the fans are very sensible and see in such acts false intentions.

– And well, unfortunately a couple of weeks ago we organized the Espectros festival in Murcia, and due to the strike you couldn’t come. Just let you know a lot of people moved to Murcia just to see you so, is there anything you would like to tell to all of them?

El Rojo «Fraport» sucks! «Airberlin» sucks! This organisations have fooled us! Believe me, You honest people of Spain: It wasn’t our fault! And we were as much disappointed as You were!

– I guess next year you will be among the Espectros bill, won’t you? 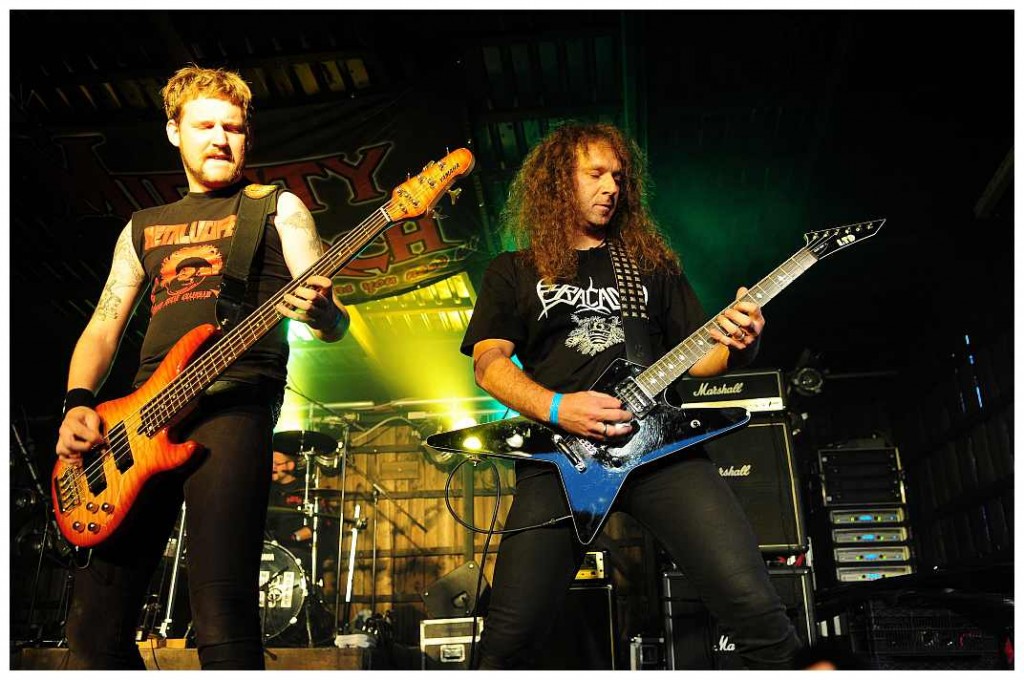 El Rojo: If there will be no strike and we are still «alive and kicking»: YES!

– And leaving behind the bad things; how’s the touring situation in support of this album?

TP: We do some shows, but not a real tour. The fact, that all bandmembers have their jobs and their families with children, does not allow a coherent tour. So we play some shows at the weekends or at some festivals. We have to see which offers we get and then we decide where we can play. So it was also in the past.

– Will there be any special pressings of it?

Blumi: We have a second cover artwork for “Ultima Ratio Regis” in the hindquarters, which we will use for a release overseas. Maybe Japan…those guys over there are crazy for such different releases.

– And on a view to the future, what do you have in mind for upcoming releases?

T.P.: We are still an underground-band and the kinds of releases are limited. So I don`t think that we will release a DVD. May be, we make a Video-clip, if it`s not too late. We have also been asked if we are interested in recording a song for a tribute-sampler, so watch out for it in summer. After that we will concentrate on new songs, we already have started in collecting new ideas.

– That’s all from our side, our best wishes and hope to see you soon in Spain. Thank you.

T.P.: So we do,too. Thanks for your interest. Metal on!