– Greetings! First of all I’d like to express in the name of Queens of Steel our sincere condolences for the loss of Jimmy, and also, of course, our gratitude for giving us your time. How is the band doing after this hard shock?
Jimmy’s death is a big blow to us all and it’s particularily sad that it happened on the eve of the release of the record. We could have released “Heavy Crown” a year ago, but we had all decided to wait until we were free to tour behind it, so it’s both sad and ironic that Jimmy passed away when he did. He really believed in this record and this band. He even got a Last In Line tattoo last year – the only tattoo he ever had!

– Of course, I’d like to congratulate the band for the “Heavy Crown” album. Where did the idea of reuniting the Dio classic line-up arise from and why?
In early 2011 Scott Gorham had asked me to play with Thin Lizzy for a few months while Def Leppard weren’t busy. I was always such a big Thin Lizzy fan and so after that tour I was completely reconnected with my instrument again and I felt that the experience had unleashed my inner sixteen year old – all I wanted to do was to get back to my early guitar roots and get angry with my Les Paul again. I called Jimmy and Vinny and asked them if we could get together and jam in a rehearsal room. At that time it had been 27 years since we had last played together, but the chemistry and magic was immediate as soon as we started to play. We were all so excited by the feeling and Vinny suggested that we call his friend, Andrew Freeman, to come down and sing with us. When I heard Andrew I immediately thought about playing some shows. The idea of having the sound of the original Dio band together with a very different – but equally powerful singer – really excited me. So, all in all, it happened by accident, not design.

– Having had a listen to “Heavy Crown” I must claim that it sounds as pure classic Heavy Metal. Please, tell us how did the songwriting of the record go.
In 1982, when we were writing songs for the “Holy Diver” album, Vinny, Jimmy and I would go into the studio and just jam. Ideas would always flow. Sometimes we didn’t even have an idea to start from, but we would always inspire each other. Vinny would just lay down a groove so monsterous that I would be inspired to play something that wasn’t even in my mind to begin with. Later in the evening, Ronnie would come to the studio and we would play him what we had. He would listen a few times and then he would look at his lyric books and find something to sing on top of it. Sometimes Ronnie would make suggestions to change the arrangement, but frequently he would just leave it as it was and make his lyrics fit. We took this same approach with the “Heavy Crown” record; there was never any pressure and the songs came very easily. Andrew had moved from Los Angeles to Las Vegas at this time, so if he wasn’t available to be in the room with us, we would send him a recording of the arrangement and he would write a lyric and melody on top of it – just as Ronnie had done all those years before. At other times, Andrew travelled to Los Angeles for the writing sessions and those songs would take on a different  direction because of Andrew’s input. But both methods brought very good results for us.

– Talking about the songwriting,there are mostly slow, heavy, mid-tempo songs, but there are tracks like “I Am Revolution” or “Martyr” that sound fast and straight. Why aren’t more songs like these? Did you prefer not abusing on speed tempo?
That’s an interesting point. I actually wish that we had recorded one more fast song for the record, but we just went with the first songs that came out. I think that if we ever get to make a second album we would probably be conscious of writing a few more really high-energy songs like “Martyr”. It’s definitely one of my favourites on the album. Having said that, there is a lot of power in the slower tempo songs and a lot of the classic Dio-era songs were in that same, open, but powerful mold. A lot of that comes down to our natural inclinations as players.

– About the album’s production, I have to say that is quite clean and clear, being Jeff Pilson (Ex-Dokken) in charge of that task. Did you want that sound? Why was Jeff Pilson chosen?
We deliberately recorded the album with a minimum of compression at every stage of the process, from tracking, to mixing and to mastering. We wanted it to have that clarity that’s reminiscent of records of the 1970’s and ‘80’s. The album was mixed and mastered by a very talented young guy called Chris Collier. After we had recorded the first 4 songs with Jeff, we had Chris come to the studio so that we could play the songs for him. We urged him to go home and listen to “Holy Diver” before mixing the tracks. It was important to us that our sound wasn’t lost to the modern trend of over-compression like many new records seem to be. Jeff was an inspired choice as a producer – our manager, Steve Strange, suggested we work with him. Jeff is an extremely talented engineer and producer and he has a great home studio that was just big enough that we could cut the tracks live – which was 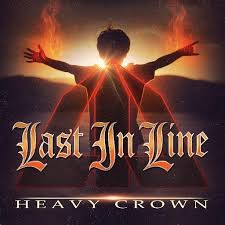 vitally important to us; we could never acheive the sound we wanted by recording piecemeal. One of Jeff’s many great strengths was his ability to bring out the very best in Andrew’s vocals. Jeff himself is a great singer, so he really understands how to pull a great vocal performance from a singer and I feel he really did that with Andrew.

– Knowing that you are busy musicians, as you are in Def Leppard, Vinnie I guess may be involved in some other things, Andrew with Hurricane, and as Jimmy passed away recently, do you plan to go on with this project? Or was it only planned recording one album and play a gig at the Frontiers Festival?
It’s very difficult to think about the long-term future without Jimmy. I guess we’ll see what the response is to “Heavy Crown” and let that determine our future.

– On the Frontiers Festival subject, I guess that the band has prepared a set to head the fest. That set list will be centered on the current album or there will also be Dio era songs?
I don’t think that we can assume that everybody at the Frontiers Festival will be familiar with the entire “Heavy Crown” album, so we will most likely find a balance between the apporpriate Dio songs and the new songs, but we will attempt to play as many new songs as we feel will work in the show.

– Looking at the artwork I see references to Dio, being the Last in Line’s font/logo similar to Dio’s and one of the hands of the children that is showed giving the back to the observer is making the horns sign. What can you say about it? I think it’s a clear homage to Ronnie James Dio.
I guess you can take whatever your eyes see from the artwork. Yes, the font is reminiscent of what we used in Dio as we wanted to appeal to that audience. Jimmy, Vinny and I were 75% of the original band and we feel it’s okay to reference our past in that way. However, the idea to use the horns was not ours – that was our record company’s idea.

– Talking with a legend as Vivian Campbell, I cannot avoid to talk about yourself and your career. As far as I know, you had serious health issues that I hope went well. Have they affected your career recently?
My health concerns are ongoing, and I believe they might be so for the rest of my life However, I’m not concerned at all and I’m confident that I can deal with whatever cancer throws at me. As long as I can keep working, I know I’ll be fine.

– Also, I can’t avoid to mention that Def Leppard have recently released a really good album that recaptures the band’s essence showed in the 80’s. Have Def Leppard planned to tour Europe soon or will you do it later on? I had the honor of seeing you in Barcelona in 2013 and I have to say that it was really amazing.
I’m glad that you like the new Def Leppard record and I agree that I think it’s the best in many, many years. Unfortunately there are no plans for a European tour at the moment. We may write and record another new album in 2017, but we may also play some European festivals in 2017, too.

– And I also had the luck of seeing you in 2011 with Thin Lizzy (my favourite Rock band, by the way). How was the experience and how it came you were forming part of that legendary band?
It was great honour and thrill to share the stage with Scott Gorham and Brian Downey and to play the songs of my youth. As I mentioned earlier, it was my brief tour with Lizzy that prompted me to want to get together again with Jimmy and Vinny and revisit the old Dio-era songs and play aggressive guitar again. Musically, it was a real career highlight for me.

– Thin Lizzy are currently touring and they have recorded new albums under the name of Black Star Riders. Did they propose you to join the band? If that’s the case, what was the thing that made you refuse?
No, I was never offered that position, nor would I have accepted it. Scott has always known that I’m commited to my career with Def Leppard. Besides, I think that Damon is a perfect fit for that band.

– Well, that’s all. For me it has been a great honor to interview a six string living legend like you, and I wish that your health issues get well. I hope to see you live for the third time, and whatever you want to add or say to your fans, you are free to do it.
Thank you so much for your questions. It’s always a pleasure to speak about Last In Line; it’s a project that’s very close to my heart. We all very much appreciate the encouragement that’s been given to us by all of our fans around the world. On behalf of Andrew, Vinny, and our late friend, Jimmy, many, many thanks for the love and support.