– Hi, thanks for your time. What are you currently up to? How is everything doing right now with WAR FROM A HARLOTS MOUTH?

You’re welcome! We’re doing good and we’re excited for the release of VOYEUR. It’s out tomorrow and we are gonna play the Euroblast Festival as our release show, so it should turn into a good day.

– First off, how did you come up with the idea of such a curious name for the band?

Oh well, this band started as a side-project and we really didn’t expect to go anywhere with that music, so we went for an out-of-the-box name. It is a metaphor for a person that is lying. The war from the mouth is the lie and the harlot stands for the person, lying to you, if you like.

– Expectations from your fans on your new «Voyeur» are high as you have always got really good reviews but, what are your personal expectations on it? How is its feedback being so far?

Well, the only time we really have expectations is when we’re writing songs. First and foremost, we have to please ourselves and we are 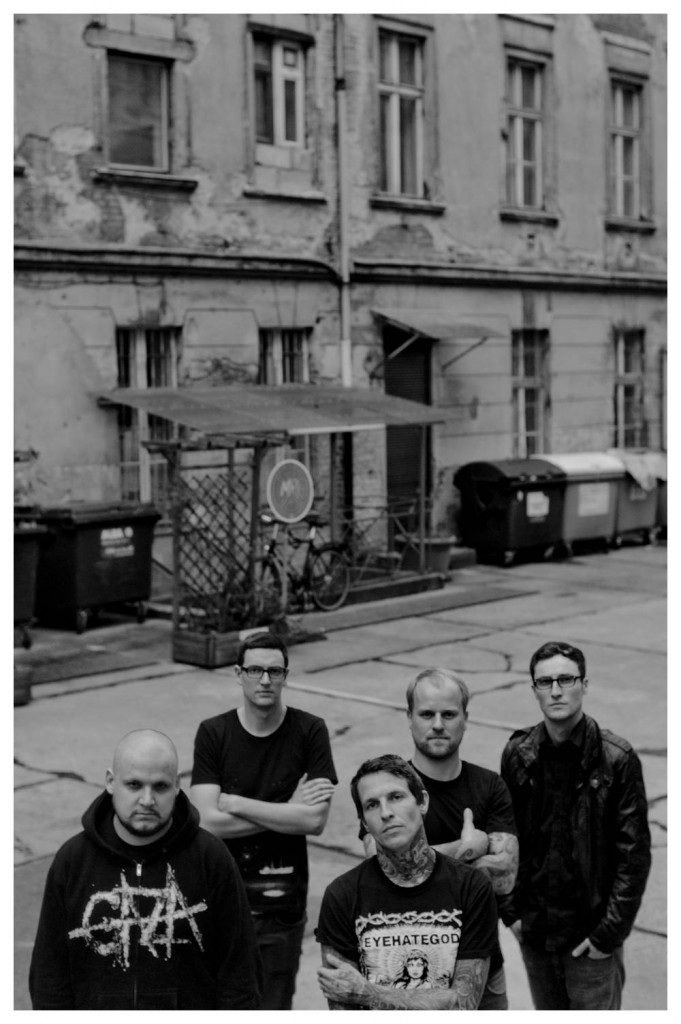 really happy with how VOYEUR came out. It is what we wanted it to be, dark and intense. The feedback so far has been great, better than ever before actually. It seems like VOYEUR is really delivering our message in a very insistent way.

– And does the fact of having released such acclaimed albums make you work under more pressure or do you just do what you do without thinking on what people may think about it?

Like I said, we really only try to please ourselves. I don’t write music with the listener in mind, I’m trying to express my own feelings and creativity. Musicians who write songs with their fans in mind don’t really have a lot of artistic integrity in my opinion. You have to write for yourself and if there are people out there who are appreciating your music, you can be happy and grateful. If you do it the other way around, you’re just an entertainer, feeding the masses.

– «Voyeur» feels like one of your most mature records to date, adding some fresh elements and different layer to your compositions. In fact it seems like you have focused a bit more on the songwriting. Is that true? Or do you just let things flow?

That is very true. Our older material was a little more chaotic, but with MMX we figured out, that we wanted to focus on other things to express restlessness in our music. For VOYEUR we wanted to write actual songs with clearer structures, so that they would have more of an impact and for the discordant and atonal nature of our melodies to show through even more.

– You have even added classical strings on this album. Would you mind to elaborate a bit on this (how did you come up with the idea, who is the composer, etc.)?

It was less of an idea and more of a coincidence, really. I met John Strieder online in my last.fm group ‘Dissonant Network’, where I’m writing reviews for discordant Metal albums. He joined the group and commented some of the reviews, so I ended up on his personal page one day and checked out the Soundcloud profile in his info. And I was blown away by his compositions, because they were of such a similar nature to what we are doing, yet so differently crafted. I dropped him a message immediately and asked to collaborate for our new album and he actually said he was a fan of our last album MMX, so he was interested in working with us indeed.

– There’s also a guest appearance from DIORAMIC’s Arkadi Zaslawski. Why did you think about him for this «guest appearance»? And what has he brought with his cooperation?

Dioramic are one of the few really outstanding bands in the German underground Metal scene and we have been friends for a while. Arkadi’s vocals and style of composing is so unorthodox, it really reminds me of how we go about music, but the outcome is so different. However, after writing ‘Scopophobia’, we had this Deftones-ish part in the middle and our drummer Paul came up with the idea to ask him to add some of his vocals. I’m really glad he went for it and it came out so good. He even changed the guitar 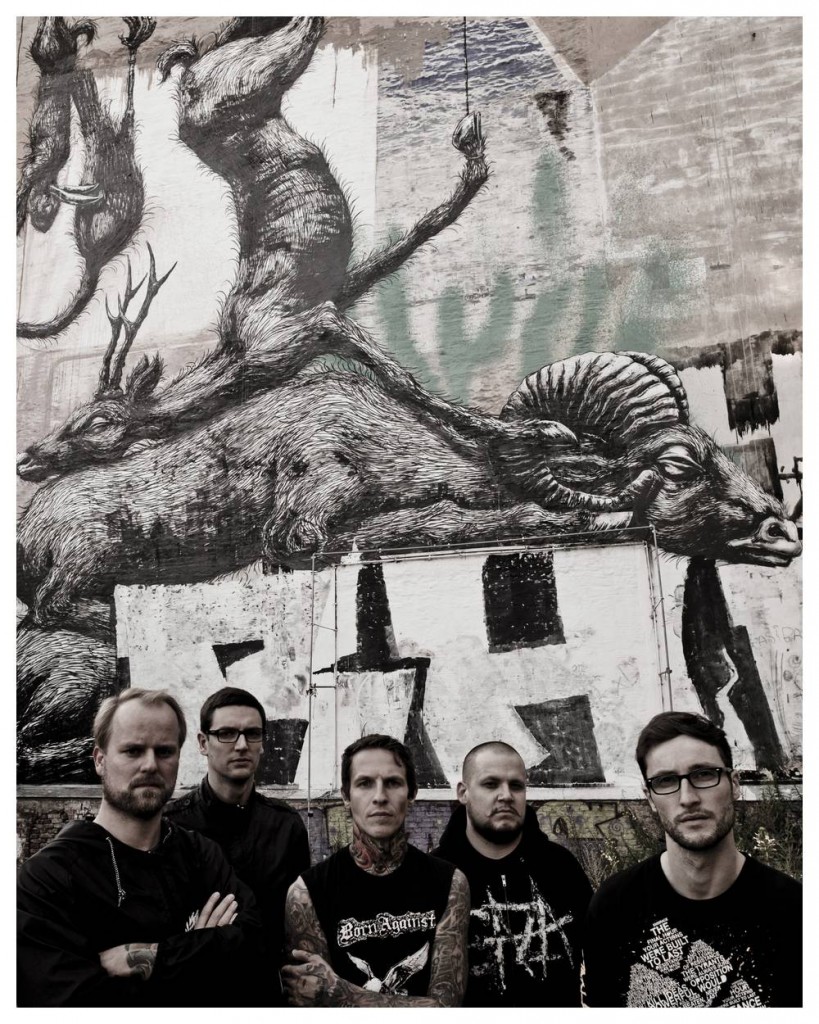 arrangements a little bit and sent me the tabs, so I re-recorded the part for him and he added his vocals. Another interesting fact would be, that we wanted him to do his feature on ‘The Black Lodge’ originally, after pre-producing it earlier in 2012. But in the end we felt like ‘Scopophobia’ would benefit from it much more. And it did!

– I think this record shares some similarities with MESHUGGAH on riffs, tempos, vocals, drums etc. Were they an influence for this album or has everything just ended up like this?

Meshuggah have always been a huge inspiration for our drummer Paul. Actually, the year I picked up the guitar, I bought Meshuggah’s ‘Chaosphere, because they were in the Ibanez catalogue. So yeah, I guess you can say some of us have always been fans and the influence does show through here and there, especially in ‘Temple’. Other than that, I think it sounds generally similiar, because we are using 8-string guitars as well and that really makes for a very certain tone.

– We could say your basis is Metalcore, as being the most prominente style on your music, but you also mix elements from different styles, which makes your music something singular so, what are you main musical influences?

I don’t know, people have called bands like Killswitch Engage Metalcore, and they have called Burnt by the Sun Metalcore back in the good days. Now those are two very different bands, so I really don’t think you could pinpoint our style as Metalcore, especially today, where it stands more for the Killswitch Engage side of things, which we share no similiarities with. We have influences in Grindcore, Black Metal, Technical Death Metal, Mathcore and even in Contemporary Classic.

– Leaving the musical aspect aside; what are some of the lyrical ideas covered on this record? And what does the cover artwork represent?

VOYEUR is all about voyeurism, stalking and paranoia. It takes a look at all this from the victim’s and the offender’s side, because both sides are equally interesting and challenging. I’m really fascinated by the darker sides of human psychology in general, so that is where I draw my inspiration from when writing lyrics and music. The cover shows a mural painting hanging on a wall, with the eyes being cut-out, so at some point, the VOYEUR was sitting in the room behind it, staring at you.

– This has been your first offering with Season of Mist after releasing your 3 previous albums with Lifeforce. What prompted this chane? And how is everything with such a strong label in Metal?

The contract with Lifeforce was simply running out and we were looking for a label, that would fit more well with us musically. Season of Mist was my favourite option, honestly. They stand for high quality, experimental and extreme Metal and have a great roster, with bands like Deathspell Omega, Kylesa, Sólstafir, Misery Index and so on. It’s not a matter of ending up with the biggest label possible, it’s a matter of ending up with a label and roster you fit into. I’m glad they were interested in working with us and of course it’s exiting to work with a label like them.

– All this about «Voyeur» being said; how could you describe it in just 3 words? 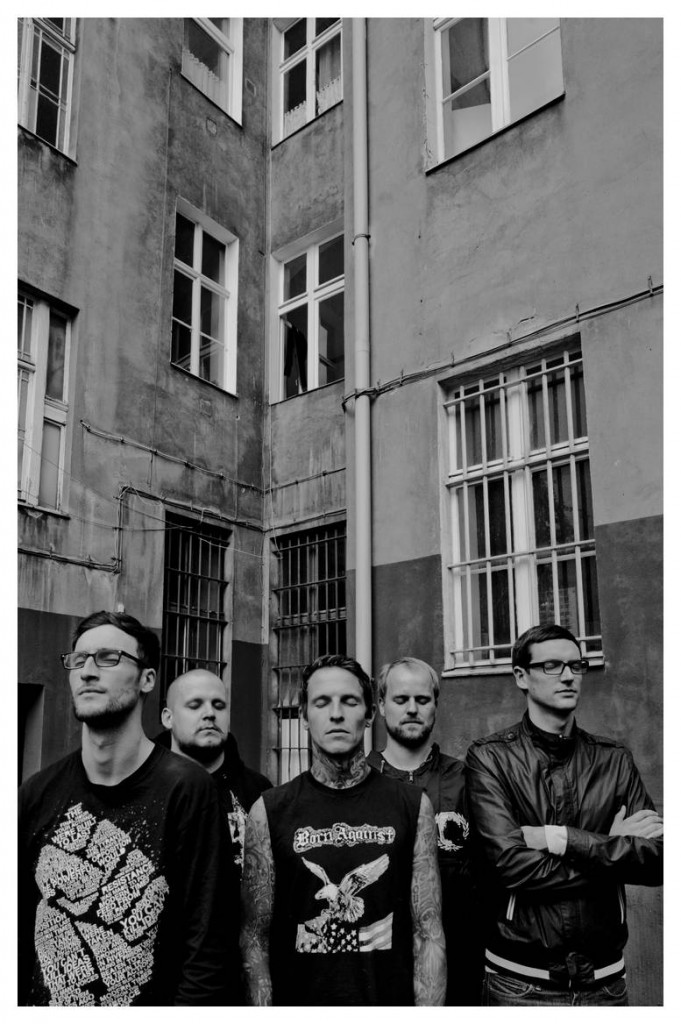 – Germany semms to be a good country for extreme Metal, but we don’t know that many bans into Metalcore, Mathcore or similar styles so, what bands playing a similar style to yours could you suggest?

We have a small scene for music like ours – experimental and extreme Metal or Hardcore – so the few things I could come up with, would be Bitterness Exhumed, which we’re gonna take on tour at the end of the year, The Bleeding from Hamburg, consisting of ex-members of the Chaoscore hatemachine Time has come, Dioramic, Der Weg einer Freiheit, and when it comes to a more simple style of Hardcore, Final Prayer are a Berlin stronghold and a crushingly heavy live band with a great new album.

Thanks for doing the interview with me. Make sure to grab a copy of VOYEUR on CD or vinyl and if you want to stay in the loop regarding our shows and tours, add us up through www.facebook.com/wfahm – see you on the road!