– Hello and, first of all, thanks for taking your time to answer to our questions. Your sophomore album has just been released, how are you feeling about it? Has it turned out as you expected?

Wow, it´s an unbelievable feeling to hold the LP and CD version in my hands. Such a long time went by since our previous release came out. Definitely the rebirth of Reign In Blood for me. The sound, layout, cover are all magic impulses that I want for the album and they have a real face in this work.

– I won’t ask you to make some history of the band, but I’d rather first off like you to tell us what motivated you to form REIGN IN BLOOD in the first place and what bands inspired you to make the step.

Before I started with REIGN IN BLOOD I played in another band. But during the last years of this band I couldn’t find the satisfaction that I was searching for in music. Then it was clear, I had to start a new band to fulfill all my visions and concepts. Since 2005 RIB is the best valve to spread all my thoughts. Bands like: King Diamond, Bathory, Metallica, Slayer, Satyricon, Mayhem and many more motivated me.

– And what’s the meaning and history behind the band’s name? Does it have anything to do with SLAYER?

My Metal roots lay back in the mid eighties. SLAYER had always been present in my life. It was an honor for me to give my band this name and nowadays it is a bridge to the past. But I developed my own vision around this name.  For me is much more than Slayer. The name reflects the dark side of mankind. All the dark desires that lie inside man. Desires like, destruction, war, sadism, masochism, drugs, killing, lust, sin, pain. All the things that make this world hell on earth. So much blood flows through the history of mankind. It was always a bloody reign. The name is like a mirror that reflects life.

– Among other themes on your lyrics you also touch a little bit on Satanism. Is this a theme that fits the band aesthetically or it goes deeper and reflects your beliefs or maybe we should take it as an allegory/metaphor about more «earthy» topics?

Let´s put it this way, Satanism is a part of me and also a part of Reign In Blood. In the early days I used this theme only for our lyrics. But nowadays I want to include more occult forms that I can see or feel. Like the Great Father Death!!! This is a new chapter for me in my life. But the Devil is not dead. For He always burns in my heart. All the time.

– As I said earlier, you have recently released your sophomore album, which is «Missa pro Defunctis», your first full-length in a decade. What has the band been up to during these 10 years? What was the main reason for such a long time in between releases?

Since 2010 it turned more and more difficult to rehearse together. Our drummer and bassist at that time lived more than 100 km away from my home. And because of work, family and other things we couldn’t find the right time to rehearse together. I think it was in 2011, we made a decision and we split up. Deus and me rehearsed til the end of 2012, but it was not the same anymore. So it was time to lay down RIB on ice for an indefinite time. Everyone of us went their own way during the following years. Deus and I visited each other from time to time to drink a beer and talk about the past. But the impulse to create music never died. At the end of 2016 it was time to break the ice and welcome the rebirth Reign In Blood. 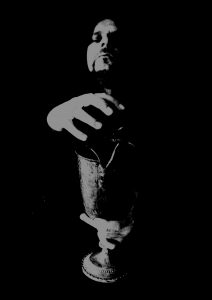 – Starting to delve into it; what’s the symbolism behind its cover artwork?
The creature of the cover represents Great Father Death, but in a different form without the skull face and the scythe. He celebrates the «Missa Pro Defunctis» and in his right hand he holds the Cup of Life. Knowing about all things from the beginning to the end. The symbol of the mask represents ancient wisdom. And the magic white eye reflects the eternal connection between life and death. His glance shines through all of us, no matter if you are strong, weak, rich or poor, he is always looking at us. But if he turns the Cup of Life upside down, he will stare at you and then it’s time to die. He is the guardian of life and death. You can see him everyday on the social media,  war and catastrophes or in nature. In my eyes he is the one and the only God. He is so real, not like the other gods that you can never see.

– This album seems to revolve around or to focus strongly on death. What did inspire this?
Some years ago I lost an important person in my life and during all these the years I have searched a way to handle all my impressions. “Missa Pro Defunctis” is the result of my quest, a journey through the valley of death. And also a step inside of me, I found a deep satisfaction in my spirit through the album.

– And how do you explore the death theme throughout and via the songs on the album?

Every song channels a different feeling inspired by the almighty death. Feelings like, how does it felel like to die and to be part of a funeral procession, or to fall in a hole, or how is the reaction when you lose a beloved one. The beginning and the end, to travel back in the universe to be a part of this, sitting in the halls of death in complete silence and to touch a corpse. On our new album you can explore all these emotions and more.

– In fact I feel like you face your art as a whole thing, enclosing music, lyrics and artwork.  Is this sense of wholeness your vision of your music? And what is your music for you?

Yes, you are absolutely right, this was the vision for long time. To create an album where all elements lyrics, music and layout flow as one unity. Our music is for me the key to step into a world beyond the real one. This is the place where all my feelings and impressions have a real face.

– This record was released by Iron Bonehead. How did you hook up with them?

I had sent the song «Dawn Of A Dying Soul» at first to Patrick. And he wanted to listen more from us so I sent him the whole album. After a lot of days he told me he was interested in releasing the new album. It’s a great pleasure to work together with him.

– On «Missa pro Defunctis» there are a lot of Thrash elements. Was there any specifical reason behind this? Were you listening to a broader range of music styles when writing this record?

No, I think there is another reason for our song structures. We listen to a lot of styles in metal; death, thrash, speed, black and doom. Our vision for RIB is to mix different styles and finally we can sau this is our music, our sound.

– There are also some Doom and Death Metal elements, making «Missa pro Defunctis» a quite diverse album. How important is to keep things varied and entertaining for you both as musicians and as songwriters?

Very important, I like it to create music with different elements. I think there are more options, this way the songs have a stronger personality. One of my favorite artists is a great creator of our era, he is called King Diamond!!! He inspired me a lot  to create music in this style, which you can hear on “Missa Pro Defunctis”. Hail the King!!!!

– Structures are also more diverse and provide more melody. Was the songwriting process any different this time around?

No, it was the same process but my vision for the album was different to “Diabolical Katharsis”. I wanted to write an album where it is possible to dive completely down. 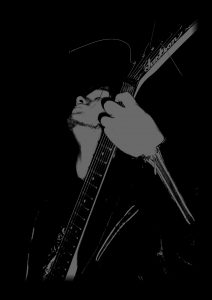 – Musically you have evolved a lot since your previous full-length, “Diabolical Katharsis” came out, know with a more unique and focused sound. I guess a first album might be more like a learning experience, and the sophomore a more steady step into your actual musical personality…

Yes, I think that view is very accurate. But I must say every album is a learning process to create an own personality inside our music. A lot of bands created their own sound on their first recordings and in my eyes it is an important step. My goal is to play music where by listening to the first seconds of a song the listener can say «yes, this is Reign In Blood».

– During these years you lost your drummer so, who took drum duties for the album? Will you continue as a two piece from now on?

The album was recorded with S. R. a good friend of us. We plan for the future to celebrate RIB as a duo. For upcoming recordings or maybe live shows we would work with guest musicians.

– All this about «Missa pro Defunctis» being said; how could you describe it in just 3 words?

– And now, what are the near-future plans for the band?

Well, we are back in the rehearsal room to create new songs for a next album. And maybe we can play some single shows in next future. We will see…!

An eternal mystery is life but death remains a secret. Thanks for the interview and for the support from Spain. Keep the flame of black metal alive!!!!!