– Hello, first off thanks for answering to our questions. How is everything doing at the moment into the CADAVERIC POISON’s camp?
The dust is settling from the killer releaseat the moment, a few critics put the record in their top ten, but let’s be honest, many people haven’t even heard the recording yet. In today’s scene there are so many releases in any given year that it’s hard to get recognized let alone appreciated! (Speckmann)

– CADAVERIC POISON is a new band formed by three veterans. How did it all arise?
Seegel contacted me personally and said he had a few songs he was working on and asked if I would be interested in hearing them, and maybe collaborating!I checked out the songs, and liked what I heard and began writing lyrics for the first seven-inch record. (Speckmann)

– And how could you say the band name represents the band? It gives a clue on the brand of ugly Metal you’re playing and its spirit. Was it something you were striving for to find something that could fit your essence? 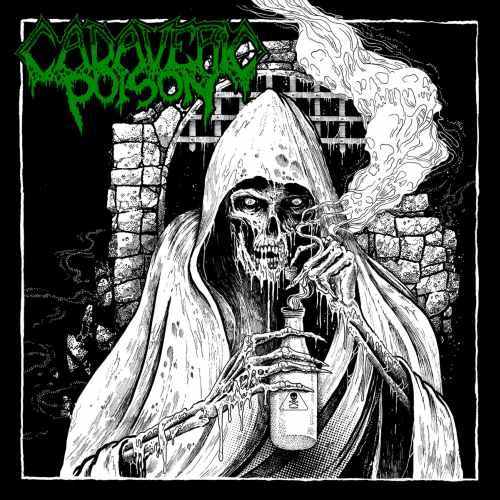 I was thinking about a couple of days to find this name. For sure I was searching for a band name that works with our music and give you a idea how the sound could be when you just read the name. (Seegel)

– After an EP you released your self titled debut album early this year with Metal on Metal Records. How did you hook up with them?
I know Simone and Jowita for many years cause Jowita did the cover paintings for the last four Witchburner Lps. So it was about time to release something on Metal on Metal Records.   Jowita and her husband Simone lead this label with real passion. I am still happy that they liked the album and did thouse killer job.(Seegel)

– How could you say has the band evolved from «Fight for Evil» to this first full-length?
The reactions and reviews about the EP pushed us to write more songs for a whole album. It was very good to see that the audience liked Fight for Evil, the birth of Cadaveric Poison. (Seegel)

– And how does it feel having your debut album out? Now that is has been a few months since it came out; what are your feelings on it and how is the audience reacting?
The audiences are digging the record so this a good thing, but like I said earlier it takes time for many people to hear a record today as every Tom, Dick and Harry is releasing a new record, everyone is in a band these days! (Speckmann)

– Even though you are a young act, you play nothing but old school Death Metal. Having all the three of you different musical backgrounds and hailing from different countries, what different influences could you say we can find on «Cadaveric Poison»?
In all honesty, we are just trying to write music that we enjoy, so it’s not groundbreaking stuff, it’s a continuation of what real Metal should sound like, at least in my opinion. (Speckmann)

– As I said, all of you have been and are involved in different bands, how much of them have you poured on this album? I don’t mean musically, but also in a more metaphorical sense, as I guess each and every of your bands may have taught you something and provided you different experiences.
This is a difficult question as I always put a bit of myself personally, into every band as well as the projects I am apart of, I simply write lyrics about the subjects I feel that are relevant at a given time in my life, and hope for the best. I share thoughts and ideas on the subjects that interest me of course as with Master as well! (Speckmann)

– You also throw to the mix some Thrash elements. Is having a rich sound into the old school DM borders something you were aiming for or rather something that just comes out natural when playing this kind of music? Since back in the 80’s Thrash and Death Metal seemed to just go had in hand.
My riffs come total natural, means I dont check my riffing if it sounds like something in the 80s. Its  just my style to work out songs. (Seegel)

– Nowadays there are a lot of bands somehow tacking back the sound of 80’s or early 90’s Metal. What did that era have that lacks in today’s Metal?
Actually originality, many of today’s groups are clones of the past greats, but I guess you could also say that some are carrying the torch so maybe it’s a good thing! (Speckmann)

– «Cadaveric Poison» is a super intense and straight forward album, but it also shows a certain, subtle complexity at times. Would you mind to tell us how did you work on the songwriting process?
First I started to find the main riffs for a verse and chorus. After that Felix and I build up the first structures for the song while playing it together in the rehersal room.When we both like it and play it smoothly together we do a live -one-mic-recording, send the song to Paul so he can tell us his opinion and can start to write the lyrics.(Seegel)

– Is it also a way to give the whole album some dynamism?

Yes ,i think it is good that the influences of all members flows together in one album. (Seegel)

– Lyrics are not too different to certain bands some of you play in. How do you work on it and what are some of the topics you deal with?
I was given the music and simply wrote the lyrics that came to my mind after a few listens. This is the way my lyrics are always created for the bands and people I collaborate with. There is nothing magical about it, at least in my eyes. Luckily I have never had to experience writer’s block! After years of experience, things get much easier Iguess. If you read the lyrics you can surely find out about the topics my friend.(Speckmann)

– Sound-wise, you have got a really natural and organic sound. How did you record the album and how was the production process like?
We recorded in the same studio we made the recordings  for the EP. Our friend Michael(Witchburner) is the owner of Rekordz Studio. So it was very family like. Paul made his vokills at Shark Records in Czech. Michael made also a perfect job at the mix and mastering. We are all very happy with this warm and organic sound. The sound fits perfect with our kind of Death Metal. (Seegel) 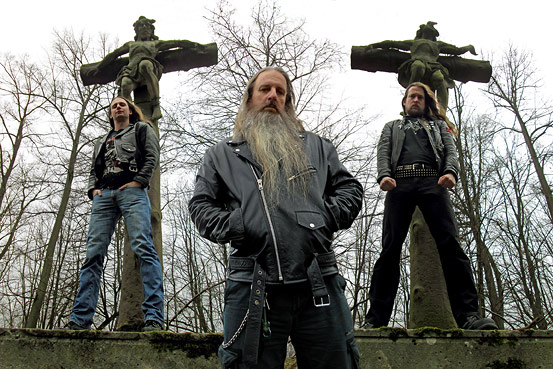 – And about the cover, what could you comment on it? It also has a quite 80’s look. Who was the artist?
The painting is from Mark Riddick we all realy like his art. In my opinion he is one of the best in this kind of style. He ist very professionell and it is always easy to work something out with him. (Seegel)

– All this about «Cadaveric Poison» being said; how could you describe it in just 3 words?
Death fucking Metal

– Finally, what are now your near-future plans?
We have no concret plans at the moment but hopefuly we can work out more songs in the future. Timewill tell…(Seegel)
Thx for theinterest and support of Cadaveric Poison