– Hello and first, of all, thank you for ansewring to our questions. How is everything going right now with SANHEDRIN?
E: Hi Sorry it took us a minute to return this. We are catching our breath after a month in Europe.

– Your European tour is about to end, how has it been? Is there any difference between touring the USA and touring Europe?
E: Musicians are simply treated better in Europe. You are fed and housed for the most part everywhere you play.
J: The drives are generally shorter too. In the US and Canada, you’re often driving 8 hours between gigs

– Starting to dig into the band, why did you choose the name «Sanhedrin» and how did you come up with it? What does it mean literrally and personally to you?
E: It’s a cool sounding word that means assembly or council in ancient Greek and Hebrew. It’s got a blasphemous tinge because these were the guys that sold Jesus to the Romans.
N: It’s also a reflection of our creative process. We do things very democratically, and all come from different backgrounds, so in effect we are a bit of a «council.»

– You self-released your debut album, «A Funeral for the World» in 2007 and last 2018 it was reissued via Cruz del Sur. How did this happen? 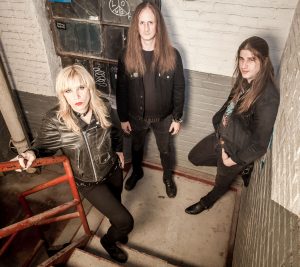 E: We were lucky enough to have the support of some folks in Germany early on. Wolf Muhlman and Deaf Forever magazine found us on Bandcamp and introduced us to Cruz del Sur.
N: We had really taken our time putting Funeral together, and we wanted to put it out on our own terms. I don’t think any of us expected the response we’ve had.

– And now your new album, «The Poisoner», is coming out. How do you feel about it? How have your fans reacted live to the new songs?
E: I’m proud of it. I got to get some dark stuff off my mind on this one.
J: We were able to bring the new songs straight to the fans, as our tour started a week after the record came out. It was a pleasant surprise to see so many people singing along!

– How did you come up with «The Poisoner» as a title for your new record? It gives some kind of magical/retro vibe.
E: The Poisoner refers to the nature of destructive idea’s like racism and sexism. It regenerates itself through history to serve the needs of those in power.

– SANHEDRIN is a fairly new band but you all three have played in different bands before. SANHEDRIN is a new story but what experiences have you learnt from your musical background that can apply to SANHEDRIN?
E: One of the things though playing in Amber Asylum is to give sounds space and time to unfold. In Lost Goat I began to write the kind of lyrics I wanted to write. Both are things I’ve brought to Sanhedrin.
J: My time in Black Anvil has definitely helped this band. Whether it be me learning from seasoned musicians or making contacts with people through them who could give Sanhedrin a hand. I personally try to make sure everything I do in life feeds everything else. A symbiosis of sorts.
N: Sanhedrin is probably the first project I’ve been in where everyone is on the same level in terms of maturity and intent. We had all been in bands before, and were looking for a creative outlet in our busy lives. There’s a level of respect here that’s both refreshing and healthy. 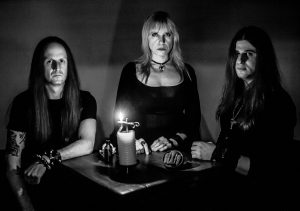 – What are your musical influences? Thoguh Heavy Metal is your musical basis there’s a lot of Doom elements and even some Extreme/Speed Metal or Folk nunances I’d dare say.
E: We all love KISS. that’s a common thread. I listen to the MC5 a lot. The proto punk/ metal sound intrigues me.
J: I think all three of us are very open to different kinds of music. This translates in the creative process in the sense that we don’t give ourselves too many rules for where a song idea can go.
N: At this point we’re all comfortable enough with each other, so it’s been fun pushing to and past the boundaries of our comfort zones. I don’t think any of us would like to be stuck playing one genre.

– And what are your non-musical influences? What does inspire your lyrics? As you cover a lot of different subjects, with I’d say a focus on the harshest side of the human condition.
E: I recently had a career transition from Technician to tech educator. I did this because I was tired of seeing the same people get the same jobs when I know there are well qualified people who look like me or are black and brown or gay, marginalized in some way or another. I’m obsessed with equity.

– Your sound is really traditional yet diverse, proof is the title track «The Poisoner», with Folk elements or the use of a violin. Would you say this song is a good depiction of what SANHEDRIN is all about?
E: Yes I think it shows how heavy we can get our willingness to go where the song takes us.
J: I agree. That song came together in a pretty different way then others we have written. I think it shows our sense of adventure musically.
N: The Poisoner was a very difficult song to write, and in a way a departure from our «Traditional Metal» brand. Being able to play sparse and open and maintain a level of conviction is very difficult. I’m just glad that so many people think it’s a good song, because we really agonized over this one.

– In fact withoutperverting your musical identity you are not afraid of trying out new things. Is it easy to get a good equilibrium between diverisity and a natural flow?
E: Thus far it has come naturally. Without having to think about it at all.
J: We know our strengths, but we don’t want to rely on them to a point where our music becomes predictable or stale.
N: Would you like to eat the same kind of food for every meal every day? We just like to mix it up.

– Is this viariety a sign that you are still shaping your style or just a will to not get stagnant? Is evolution and progress a constant process?
E: Yes a constant process. We have been playing diverse music all our lives. We are devoted to the exploration.

– This about «The Poisoner» being said; how could you describe it in just 3 words?
E: Blunt, Unapologetic, heartfelt
J: Dynamic, Mature, Diverse
N: Stark, Relentless, Flowing 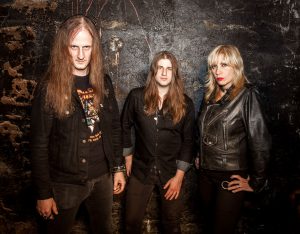 – Usually bands with female vocalists are often tagged by journalists as as «female-fronted».
How do you feel about it? Are you OK with it or rather think it’s non-accurate description solely based on the genre of one of your members?
E: Female fronted seems limiting to me. It’s the truth, but we are so much more than that.
J: The idea that a person’s gender could itself be considered a genre is really strange to me. We are solely focused on music but sometimes people involved in journalism or marketing are not.

– Even though things have (and are still changing) a little bit sexism is just a fact and there’s still a long way to go. I bet you have had to hear or read stupid comments due to the fact of just having a female vocalist (looks, the «I don’t like female vocalists» thing, and so on). How do you deal with this?

E: I’m a pretty good judge of character. I try to surround myself with smart people. Stupid ideas and comments are everywhere, That said, it can be exhausting, boring, and surprising to see it close up.
N: I think our music speaks for itself, if someone don’t like it that’s fine, but nothing they can say or do takes away from who we are and what we are about. At the end of the day this is a creative outlet for us, and we have no room for negativity on this ride.

– And before we wrap this interview up, what’s next for SANHEDRIN? What are your near-future plans?
E: In June we head out with Slough Feg for some east Coast and Canada dates, then West Coast with them in August. We are back in Europe with Spirit Adrift in September.
J: We are also playing Headbanger’s Open Air in Germany on July 25th!!
N: In the mean time, getting back into the rehearsal room, so we can tighten up some other tunes for all this touring.