– Hello and first, of all, thank you for ansewring to our questions. How is everything going right now into the IRON GRIFFIN’s camp with the release of your debut album?
Hello, and thanks for having me! All good for now, lots of great reviews around, and even the vinyl version is finally in stock! And I think the sales been pretty good, so nothing to complain actually, and new music is in process.

– To begin with, how and when did IRON GRIFFIN born?
Iron Grifin born few years ago, when I started to play guitar again, since many many years. Riffs and songs began to take shape, and when they did not seem to fit for Mausoleum Gate, I started working on my own project. Iron Griffin was born, mainly to be a project to keep me busy and keep practicing different instruments.

– The drum is your «safespace» so to speak, how does it feel to be doing all instruments yourself in IRON GRIFFIN?
That is the point of this project, to play and become better in each instrument. I am really bad and lazy to practice alone, but when I am composing and making music at the same time, it goes better with practicing. Practicing cover songs or something like that is not for me! 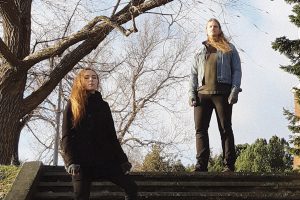 – This being said, you have also played in full bands. What are the pros and cons of having your own solo project?
Of course the full band environment is the best possible way of doing things, and I would not be here making solo project without all those years with different bands. Playing in a band gives so much information and knowledge about instruments, how differently they can be played, different recording methods, getting the sound together and so on… The best things in full band is, that the collective working can really bring some musical ideas to another level. Jamming and improvisation is really constructive! Trying different things, approaches and song structures is waaay more easier than by yourselves. But when playing in a band, it is kind of democracy, when you think that your riff is the best riff in the world, but everyone else thinks it is not… Thats where the problems usually come! People understand music and harmony so individually it is almost frightnening. Then again, working all alone gives you the complete charge of all things. Mostly it is the best, if you have strong vision that “this is going to be good”, and you can do that thing exactly how you want. In a band, it usually moulds a little in the hands of every player. Of course things are not so black and white, both band and solo has their own pros, but I’d say that doing solo projects without any band experience could be extremely difficult.

– And how did you come up with the band’s name? What does it mean? Literally and not.
I came up with the name in one quiet day at work; I was actually reading about different space marine chapters of the Warhammer 40.000, and I thought that here is some really cool sounding names… So in the end, Iron Griffin is a mash up of two chapters, Iron Warriors and Golden Gryphons. Yeah, I am a miniature war gamer and  I play Space Wolves.

– Your debut EP came out in 2017 and now you are releasing your first long player, «Curse of the Sky». How do you think has the band’s evolution been throughout these last years? Your music style remains as dark an epic.
Yeah, I like it mid tempo, dark and epic. These releases are actually so close to each other, I don’t think I’ve become much better in any instrument that much. The most improvement has been with song structures and melodies, or so I want to believe, heh. The “Curse of the sky” is based pretty much on the vocal melodies, as the first ep is more guitar driven.

– You are signed to Gates of Hell Records. Did the fact of your link you already had with Cruz del Sur through MAUSOLEUM GATE have something to do with this decision?
When I had the EP pretty much ready, I sent it to couple of labels… Gates of hell responded quickly and offered a nice deal, so why the hell not! After all I was surprised they wanted to release the EP in 12” vinyl format, and it was a dream come true for me. Things have gone smooth in the past with these labels, so I did not see any reasons to change with the full lenght.

– You have a new vocalist in this release, Maija, whom has such a powerful voice that fits perfectly your sound. How did you found her? What could you say has she provided to the sound on the album?
I absolutely love Maija’s sound! She’s a beast! I saw her performing live couple of years ago, and in the beginning of 2018 I contacted her through social media, to ask would she be interested in album project. After a demo session, it was clear that she was the one I was looking for, and we recorded the vocals together. She indeed provides the power I wanted to the album. 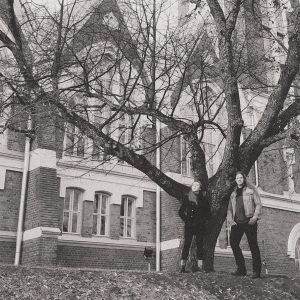 – And why didn’t you have Toni again?
Toni is a dear friend of mine, and I really like his sound, I’m still really proud of the EP we did together. The first plan was to have him do the lead vocals for the full lenght, but as the material begun to take shape, I thought why not to try someone else? To have more powerful expression? I thought, that I am doing a one man band, so I can try whatever I want. So Maija found her place in this album now! It would be aweseome someday to have them both in same release, that would be super cool!

– On the album there’s several Folk parts, almost medieval, and again you have used synths. What are your non musical influences? What are the pictures that inspire you to create the overall sound in IRON GRIFFIN?
Medieval ages, fantasy, swords and sorcery… Also video games (classic jrpgs, dark souls..), board games, Warhammer, comic books… All kinds of geeky stuff you know! But I don’t feel like tell about all these here, it would take all day haha!

– And musically, what bands have inspired you? I find there’s some MAIDEN, some MANOWAR and MANILLA ROAD.
I am a pretty big scale listener is music. Of course traditional heavy metal is the ultimate genre because it can contain pretty much anything! I could make an endless list of bands which have influenced me in making my own music, but I’ll try to keep it simple: Early Manowar. Then Brocas Helm, Pagan Altar, Witchfinder General, 70’s Judas Priest… 80’s US power metal in particular, more than nwobhm. Beside heavy metal, I am heavily influenced by 70’s folk rock stuff (Pentangle, Mellow Candle, Comus, Chimera, Hako Yamasaki, Morita Doji) and recently I’ve really deep in “dungeon synth”, also ambient stuff. I am not a fan of extreme metal, I am so fond of clean vocals that usually bands with growling vocals is a no-go.

– The general sound is really raw, dark and lo-fi. It sounds really natural. Usually from a debut EP or demo to an album we see a transition to a cleaner, more overproduced sound, but I’m glad this isn’t your case. Did you get the production you were looking for? How did you work on it?
I am really glad you like it! My goal was (once again) to produce natural and real sounding album. The recording equipment and procedure here is pretty much the same as in the previous EP: drums I use are 80’s Ludwig set (with clear Aquarian heads), with 70’s supraphonic snare (Aqarian modern vintage head), and thin and pretty dry Bosphorus cymbals (antique and master vintage series mostly). I don’t use resonant heads in toms, to get more seventies prog-rock sound. All drums were miked with Sennheiser md421, in bass drum I used also Bayer Dynamics opus 99. Overhead I used Schoeps mk4 stereo pair. Snare went through Schandler Limiteds Germanium pre-amp, all others with RME fireface’s own (pretty goos) preamps. So, the equipment is pretty high end, and so is the sound. The drum kit in this album sounds pretty much exactly as it sounds in my training place, and thats what I wanted. Guitars were played through vintage Marshall JMP, 4×12 greenbacks miked with md421. Vocals also with md421, which I find very fitting and pleasing microphone for Maijas vocals. So pretty old-school methods, and I try to avoid processing the audio too much, to get the sound right in the recording situation. Some call it lo-fi, I call it real. This album is meant to be listened loud, and thats where you really hear all the nuances, really! I am really happy with it. 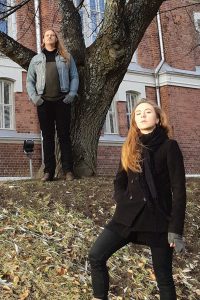 – In fact this enhaces the enveloping vibe the album has. Is atmosphere important in IRON GRIFFIN?
Yes, indeed! I want to believe that the overall sound supports the atmosphere. And athmosphere is one of my leading goals, I want to have my music dark, natural and epic.

– All this about «Curse of the Sky» being said; how could you describe it in just 3 words?
Dark epic heavy.

– You are hailing from Finland. What’s happening there lately? After some kind of «wave» there was more or less a decade ago with bands such as SPEEDTRAP or RANGER now there are a lot of interesting bands into trad. Heavy Metal releasing interesting stuff, like CHEVALIER, LORD FIST or LEGIONNAIRE. Is the Finnish scene in such a good shape as it seems from the outside?
It surely is! No need to worry about finnish heavy metal, there is a lot brewing and great things to come. Chevaliers first full album is right behind the corner, Lord Fist and Angel Sword both are recording new albums… Two brand new bands, Borley Rectory and Orphan Devil are coming also! I hope that Legionnaire would get a grip of themselves and make a new album, heh!

– And will IRON GRIFFIN play live someday or isn’t that in your plans?
It is my dream to some day play live with Iron Griffin, but it won’t happen anytime soon. Hopefully in the future! I don’t even know what instrument I’d play myself…

– Now, what are your near-future plans?
I am making new music all the time. About that, what I realease and when, is not known yet… Some day for sure.