– Hi, thanks for your time. What are you currently up to? If I’m not mistaken you are currently on tour; how is everything going?

Hi, everything cool here! We’re on the road with our friends from Cauldron right now, doing a promotion tour for our new album «Flying Dutchmen». We’re getting along very well with these guys having good parties going on and share some cool crowds in Holland, Germany, France and Belgium.

– In fact some weeks ago you played in Spain so, any nice memories of your shows in our land?

Very nice memories! It was the first time on our own in Spain, so we didn’t know what to expect. In every place the promoters did a great job getting in around 100 people to the show. They say the people are warmer and therefor more energetic, and I can totally agree on that! Every show was a blast and we felt very welcome. We made a lot of new friends there, so we’ll be back for sure.

– First off; why did you pick «Vanderbuyst» as the band’s name?

The bass player of willem’s former band Powervice was joking that if they’d ever quit Willem would start his own band called Vanderbuyst. It was based upon Willem’s real surname and in the same vein as other hard rock bandnames like Vandenberg and Van Halen. The guy seemed quite prophetic, haha

– You have just released your new album, «Flying Dutchmen», and your previous record was entitled «In Dutch»… Do you feel specially proud of being Dutch?

Holland has a good hard rock history with band’s like vandenberg and vengeance. We are indeed proud to carry on that torch.

– Considering the great reviews your two previous album got and the high expectations, have you worked under more pressure or are your feeling specially excited this time around?

It’s very cool that people like our work and look forward to new stuff. In my opinion expectations are an unnatural drive for creation. We always stick to ourselves, do what we want to do in our best possible way. So no more pressure than normal really. to me this is the best work we delivered so far and that made me excited for the release to find out whether they’d agree. We had to wait for half a year to do so..

– As it was «In Dutch» for «Vanderbuyst», «Flying Dutchmen» is a perfect follow-up to «In Dutch», though it feels to me more complete and, overall diverse. Was this something you were striving for?

Yeah, in Dutch we had chosen for the approach to record all instruments at once, as on stage, resulting in a very honest sound. For Flying Dutchmen we aimed for a more produced sound. It is still really VDB and no over-production. We got more time in the studio which gave us the chance to explore our creativity in making the songs more interesting to listen to. It was cool to experience that this really added to the overall feel of the songs.

– You have also improved on songwriting terms, and we can notice that on the song strucutres: simple but effective, with hook so, has the songwriting process changed?

The process of song writing always chances. Making music and listening to music is inspiring and makes you more aware of things that work and the things that don’t. This baggage you carry along slips into your songwriting. It also becomes easier to kill your darlings as long as it serves the songs.

– Anyway you keep your essence, and I think one of the most noteworthy characteristics in your music has always been the way you manage to unleash your classical influences with a «retro» production but also sounding fresh. What’s the secret recipe for such good formula?

The recipe is to take these three guys, with the same spirit of working and making music, put them together in a band and stir hard and long enough till you have a nice blend. Important is to be yourself and make music the way you believe it should be made without trying to be or copy someone else. Also being a threepiece is not really a typical end 70’s hard rock outfit. You all have to work hard to create a complete sound and strip down to the essence of your music.

– And due to this I would also like to know what have been some of the most influential bands for VANDERBUYST, as you blend 70’s Rock/Hard Rock with some Heavy Metal and NWBOHM elements. Anwyay I’d dare say your basis is firmly rooted on the 70’s, isn’t it?

You’re right, I always say that we’re a hard rock band. The line towards heavy metal is a very thin one obviously. Important influences from this era are a lot off course. For main ain influences you could think of bands like ZZtop, rainbow, thin lizzy, judas priest, scorpions, riot, def leppard etc etc. But don’t forget about other genres like classical, bluese, rock n roll.. As long as its good!

– It has also caught my attention the fact this is your shortest album but, at the same time, the one that contains more songs. Was creating more songs but less lengthy something you were looking for in order to create more impact with this opus? Or did it just come out naturally?

The fact that it’s shorter came out naturally. On the other hand we all dislike albums that are too long and are filled with all kinds of annoying sound experiments and fillers that you would skip every spin. Also 40 minute albums give you higher quality vinyl cutting.

– This is your third album in three years, a non-stop activity. Don’t you never run out of ideas? Where do you take inspiration from? Not musically or lyrically, but to keep on going creating so much stuff in just a few years.

This was one of the goals we had from the start and we still manage to do so. I must say it’s a tough job running from shows back into rehearsals. Inspiration comes from everywhere actually, it just comes to you while being on the road, busy with music and life itself. Every year we take one month off and travel the world. This is such a moment where ideas are moulded into songs and new inspiration arises. Then again it requires a lot of work of everyone to finalize these with the whole band.

– On the song «Johnny got Lucky» you’ve got a special guest artist, Selim Lemouch (THE DEVIL’S BLOOD). Would you mind to tell us how did this arise and what has he brought with his cooperation?

Selim is a friend from the the start. He was a former bandmate of Willem and produced our first Ep. After that on every album he came by to do some of his great guitar work on one or more songs. You’ll find some more on this album as well actually. Through him and TDB we also came in contact with our label manager Sven from ván records.

– The cover artwork and the album’s title are strongly connected but; how did you come up with the idea? Moreover the cover looks pretty simple, did you want to safe your budget for some other things?

We were doing promo shoots for the album as well as a cover shoot. We were looking for something that would jump out in the cd racks of the 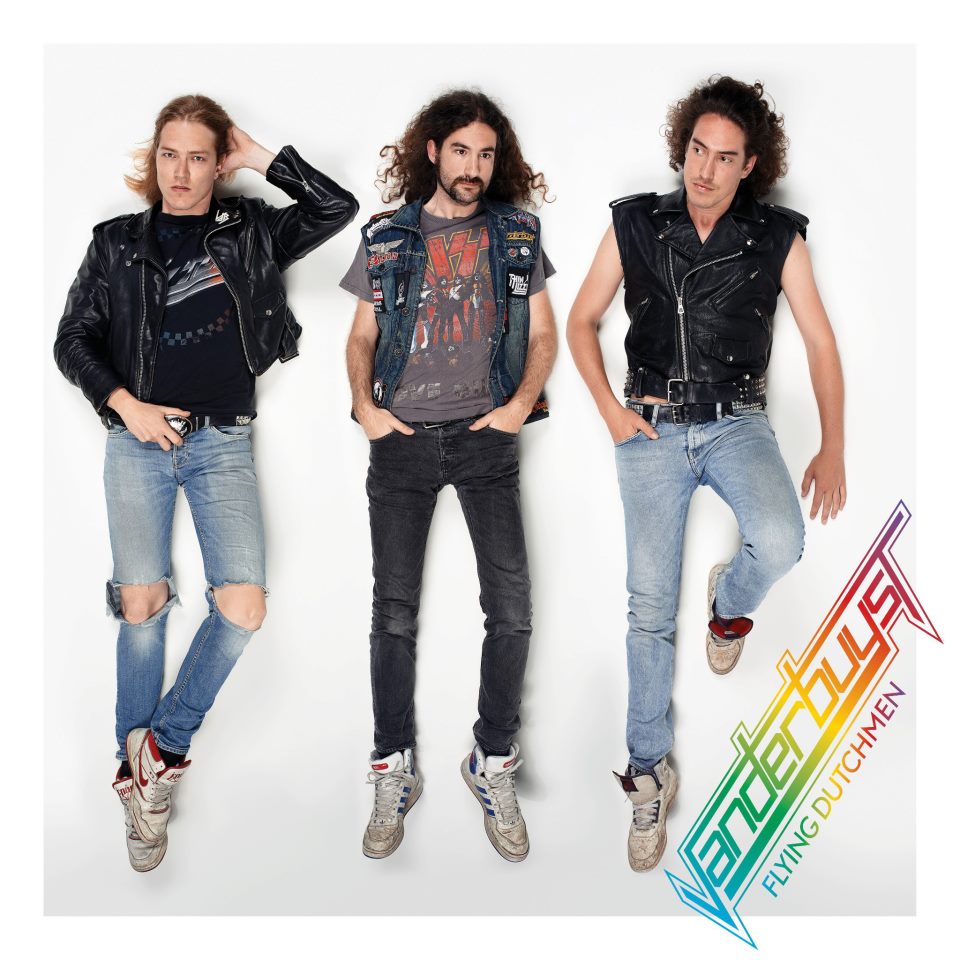 record store. This overall white cover with the flying puppets like image does the work and as you say connects very well. It’s not a typical hard rock metal cover you see nowadays, but I guess we have never been typical.

– And what do lyrics on this effort deal with?

They deal with several things: the hunger and fighting spirit to get what you want, lecherous girls, the crazy amongst us, love, criticism towards religion, sinning in the dark..

– You have already done a video for the title-track, could you tell us how did everything go with the shooting and with the release? And do you plan doing any more videos for this record?

This was the first time we found some time to make a video. A friend of ours was enthusiastic and told us his ideas. We liked it right away, especially the jacuzzi part, haha. We had two weeks to get it all done. From that point everyone started to arrange all he could. a 20 person team of professional volunteers (respect), camera’s, an old sports car, locations , a big truck and many more. We only had 2 days to film, so we worked almost 24/7. The spirit was real good and I’d like to thank everyone who helped us out again and again. No plans yet for a new one, but we’re doing some live video recordings.

– All this about «Flying Dutchmen», how could you describe it in just 3 words?

– Holland seems to be a really prolific country for extreme Metal bands but, are things easy for a band into your style? Or maybe the fact there aren’t too many acts playing your music in Holland help you stand out?

We we’re always the ones that didn’t really fit, just looking at the billing. But in the end, all (newer) types of metal in one way or another evolved from this 70’s hard rock era style of music. Sing along heavy rock songs that make you feel a winner. Being practically on your own doesn’t make it easy at all. The scene is small and pretty underground again. On the other hand you get compared to the giants from back in the days. So you have to fight harder for it, do it on your own and go through the mud. It’s rewarding though to have such a dedicated crowd, which is still growing. I think the energetic shows and our honest «what you see is what you get» attitude on and off stage convinces.

– As 2012 is about to end; could you please tell us what are your 3 favourite albums of the year as well as the least favourite one?

I must say that I didn’t have much time to check out all the new stuff, but I really love the new Graveyard album. I also like the new Zztop, witchcraft and bullet. Can’t recall the disappointments..

Play! We still have some gigs to go for the Flying Dutchmen release tour. Next year some new countries will be visited like Croatia and Greece. Looking forward to that.

Thanks everyone for your attention and I hope to see you soon at one of the upcoming Vanderbuyst parties, so we can share some energy!